The flow can easyly be calculated. All you need is engine displacement and the rpm at wich the engine runs. You will get max gas flow at full power, this is what you base your whole sistem on.

Whats the purpose for a gasometer anyway? I mean gas on tap is good for cooking and maybee some other applyences but for a stationary system l realy dont see the benefits. The gasifier will self adjust acording to load of the motor, no need for a “buffer vessel”. If automixing is in question, that has allso been done sucsessfully by many (includeing me) with much simpler systems.

The buty of a normal straight forward gasifier-cooler-filter-engine system is at NO point in time there is more thain a couple of galons of gas anywhere in the system, and even that is under vacuum. Makes a woodgas sistem safer thain petrol. As soon as there is stored gas under any pressure risk goes up. Pipes corrode, CO detectors fail…

Not my plan to preah you to not trying out new stuff, l am thinking of a positive pressure system for a while now. Just some things to concider…

Yea good points I’ve definitely thinking hard about safety the idea is to make a basic system that runs multiple things of one system such as water heating, cooking, generating power, running a splitter mabey a chipper or chunker I figured that the gasometer allows me to forfill a bunch of those things off a single gasifier. Also had an idea to run a small charging generator that auto starts if batteries go below a set level plus other ideas all based on a gasifier that supplies the gas

Best way to run a gasifier is run it constant. Generators and most other applyances tend to do that. Ironicly, this site is called DRIVE on wood and driving on wood is the hardest way to make use of the technology

Allso, keep in mind the lmbert specification chart is aproximate. A 110hp engine gasifier will run a 50cc engine just fine, prooven. Imagine a 100hp engine idleing. The gas consumption will be minimal and the (well built) gasifier has to make clean gas even then. Its then similar if you hook on smaller morors.

Also, wood shape and quality can make one gasifier perform like a 100hp gasifier or a 20 hp gasifier! Allso a thod on how to make it adjustible…

Vehicle gasification has an advantage though. While you sit in the driver’s seat anyway, you can monitor the gasifier. No need for automation.
Running a gasifier/generator for example, is different. It would require some patience to babysit a fully manual setup for hours

and automation tends to involve more complexity than most of us like.

That was a exhaguration. I am saying it CAN not that it shuld. It is best to design for your engine but what l wanted to point out a gasifier doesent need to be so precise.

Its not nessesery that a simple gasifier isnt a good one or that a complex stainless shiny machined masterpeace is a good gasifier! If you folow some rules it hard to mess it up.

Thats preety much the most important ones

Unfortunatly MikeR, even your links come up a blank screen for me.
Glad some are able to still access DJ’s information. This was short, short text with lots of low resolution pictures. I did download paper print these off a long time ago. Archived now somewhere in my meter high woodgas prints stack.

Ben-nz, all of the Velocity-is-King system size calculators will nit-pick to keep up their internal system “must-have” velocities.
However. Actual system internal velocity is not the King of good gasification. Thermal is important too. Time of Residence of the internal system sub-gasses and molecular soots /tars particles is just as Important too.
One particular gasifer developer makes Thermal his King. He heat damages a lot of system materials leading to erosion failures and system seams leaks. Never once proven engine capable.
Other system designers have made internal Time Gasses-in-Residence as King. They make a lot of flare capable gas. Dirty gas requiring four stage cooling and cleaning to ever be able to engine run. This has been done. With the complex cooling filtering systems as the make-fail weak sister.
Ha! Ha! The old Town city gas plants were these. Read and find that they only two stage clean and washed the gas just enough for illumination and cooking heating gas. AND THAT PRODUCER GAS WAS MOSTLY DEADLY CO.
And their systems were induced flows, mild pressure driven, and large floating tanks stored by steam engine driven large blowers. With the actual steam engines being open combustion boiler ran from the same bulk fuels (fossil coal and peat sods) as was used in the gas maker.

They knew even back then that the way to actually gas fuel for the early IC engines was to use much cleaner gasifying woods.
Anyhow fast forward to making fuel gas for IC engines. The best of gas maker will have a balance of Time, Temperature, Velocity in their system. And this balance will change depending on where you are at in the production cycle. And your demands on the system. The VesaM, WK, M.E.N.S., even BenP’s book systems all are capable of TTT Balance juggling.
Woodstovong comparisons. I/you must over draft like hell to as soon as possible ]get a big heavy wood stove up to clean burning. Or suffer long time with Mr Smoky slowly coming alize.
Once whole system masses heated up to good system Temps then you can cut the air back and heats driven released volatiles combustion temperature heat.
Once your wood fuel load has volatile burn out then your go into really air cut back to just across the room radiant charcoal glow heating. Mine, the elder cats and dogs favorite.
A wood fuel gasfier has to do all of these steps internally simultaneously
KristijanK has listed out the key points marvelously.

Ha! BenP.and I played around with simaltaiuosly IC engine running and reservoir gas filling. Boom. BOOM. KaBoom a lot!! Too many make a problem situations as the engine loaded/offloaded operates.
All in all. If you just must pressure store wood gas do this as a dedicated separate operation.
Low enrgy density woodgas storage is an effort in silliness anyhow.
The alphabet soup named Chinese gasifier stoves did with rough weeds as-produced gas making. for their cooking burners. Electric blower driven. Store the woodgas made power in electricity. Batteries. Inverters. Much more safer and use flexible imho.

This was actually for @SteveUnruh and others who have not found Dutch John Links, or having issues. 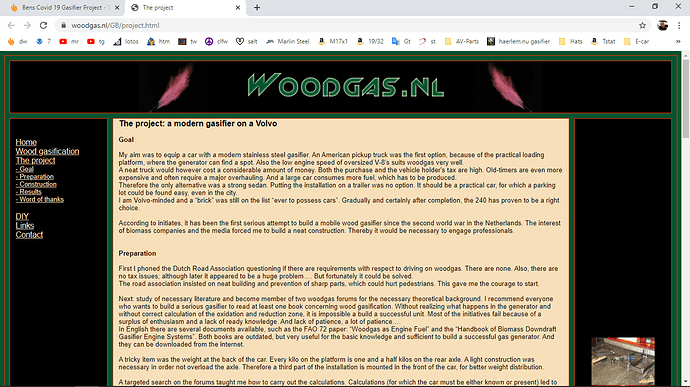 I can bring the Dutch John pages up on my work computer, my Verizon Android phone, Chrome, MS Edge. I just found out that MS Explorer (older version) doesn’t seem to let me type in woodgas.nl without the “www” in front, so maybe that is the problem.

I edited the links, try them again…
I noticed my browser inserted the “www.” without asking…

Links work fine for me. (On android)

had a thought about a positive pressure system if you made something like a mini gasometer (maybe a small pneumatic actuator) that is under slight pressure to stay in and passed the gas through it you could add switches at different positions out or a potentiometer on the ram and that could control the fan speed so as the motor accelerated it would lower the ram position and that in turn would increase the fan speed and if the revs droped the ram would drive out and decrease the fan speed. in theory that should self regulate the positive pressure. just a crazy idea that poped into my head. not related to what im doing but thought id share it. 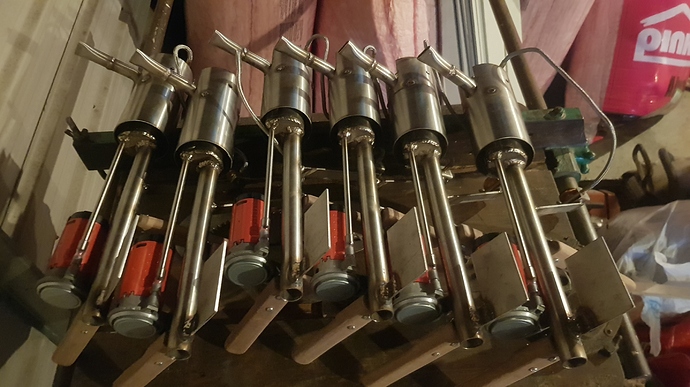 Pardon my ignorance, but what is the purpose of an oxalic acid vaporiser? Where does the oxalic acid come from, is it useful or a waste product etc?