Air In is now welded in place, the rest I won’t divulge as far as the heat exchanger goes. 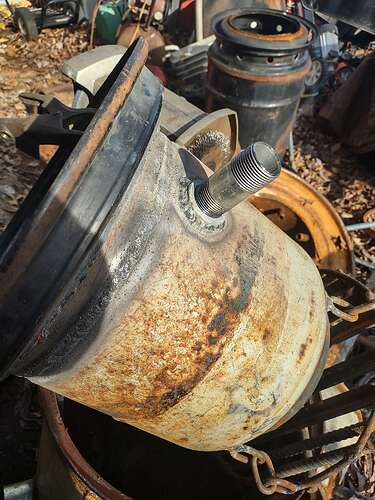 1" pipe, but bear in mind it’s only a 2 Liter and it isn’t a WK. The heat exchanger won’t be exactly like a WK but enough I feel it isn’t fair to Wayne to show it.

I’m rethinking some of the car bed idea.

I’d like to combine the bed idea and the trailer hitch idea.

I’ll put on the hitch adapter that I already bought, and make a custom cradle that mounts in the receiver hitch. The bed will have a hole for the hopper, and the frame for the bed will give a second anchor point to prevent the hitch adapter from flexing like a diving board. This should give me tons of height to maintain a good hopper volume and might even mitigate blockage of sight. To prevent straining the hitch too much I’ll only mount the gasifier down there, filter will be placed in the bed.

A picture drawng would be nice, about the bed for the cavaleer, Are you mounting the gasifier too a back porch reese hitch unit, OR are you mounting gasifier in a bed in the trunk cut away tube frameing. I am lost on your plan build. Sounds like a interesting project though.??

I was going to have the gasifier sit on the bed but I realized I’d only have a few feet to work with, and it’d block my rear view. If I could draw I’d show it, but Don sent what he’d imagined for just the bed portion. 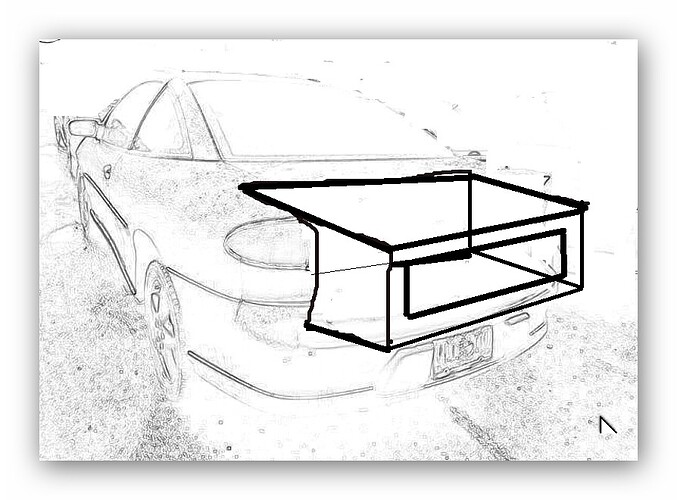 So imagine a Reece hitch cargo carrier holding up a gasifier, and the gasifier is poking through the bed.

If this box insert is made a little longer out the back, the gasifier clean out could be low behind the bump giving you more room for everything to be lowered down. Even a condensation tank n the other side below the hayfilter.
Sealing the box air tight from the truck area is great for safety. Not sur if the back seats fold down or not.
Bob

Yes the back seats fold down, so I can have some dry storage for fuel.

The biggest lightbulb moment I had was when I realized I had a terrible cleanout, the 2" port reaches the grate but not below it very well. So having the gasifier behind the car will let me have an easier cleanout.

I’ll probably mount the hopper juice tank on the gasifier platform, it won’t weigh much. But for sanity’s sake I’ll have the filter in the bed portion. Let it catch some cool air.

I have decided to combine the two condensation on the bottom and hayfilter on top. This will save a lot of space and piping. I have found most of my water ends up in my water/tar condensation tank and needs draining of that water more often then the other tank it seems to catch soot and chracoal pieces. I have thought about having it drain into my exhaust pipe where it exits the tail pipe with a pipe around the exhaust pipe. Joni did this on his gasifier builts. His would leak out on low vaccum on the hopper this is why with saw black exhaust moisture dripping from his exhaust pipe when idling I do not think it did when doing down the road. Why because I tried to make the vaccum tube work in the exhaust at higher hopper vaccums and was unable to get it to work. But it worked at idling the juices flowed out. I would just put a valve in to control it when I wanted it to dump out.
Bob

Yes its hard too draw somthing that far down in the trunk area, I think i would drop below the trunk floor pan if posible, as you know, then you still need a lower than the cooling rail codensate tank. and with the hopper and burn tube mounted inside the trunk area, would be less weight out on a reese hitch , that woulld need heavy angle or somthing bolted through trunk, the more weight you add on the reese area. If you can make it work well,thats all that counts.Hard telling whats next with the economy,with all the war fronts poking around. These wood gasifier vehicles could be a nesesity before long, hope not though.

It isn’t in the trunk it’s behind the car, you know those Reese hitch adapters to hook up a trailer to a car, and a platform put into the adapter. It’s a Class 2 hitch so it can handle about a 200lb tongue weight, but it’ll be supported by the bed as an anchor point. I don’t want anything inside the trunk area because the rear seat doesn’t seal and I don’t want any risk of Carbon Monoxide poisoning.

I ordered some more 1.25"x0.12" wall square tube to make the platform. I’m going to drill holes through it and weld angle iron tabs to the gasifier to mount it at the bottom sides of the gasifier. Using the platform I’ll gain a bit over a foot of height for hopper space.

Oh okay you are doing something like Joni did and you will have a auto shaker built in for your gasifier hopper too.
Bob

Somewhat, Joni had his loaded loosely to the Opel so it could jump around.

I have a chain suspended grate so I think the minimal movement will be enough to shake it. Being behind the rear axle will definitely jostle it on these mis-managed roads.

And to believe North Carolina used to be called The Good Roads State.

Thanks for the clearing up of your design ideas,I agree not much too mount a reese hitch too on the little cars, I got a 05 cavaleer, i could charco power, once i am happy with may dakota wood gasifier setup,and i find a sub frame for the cavaleer, the front sub caught too much salt up here in MI. great lake state The motor mount brackets have soft ball size rust holes under the mounts on subframe.

Square tubing is arriving soon. I should go ahead and get the Reece hitch mounted to the car.

I already have two lengths of the same type of tubing, so I could get started on the platform.

HIGH CODY- about this gasifier, is this a new design charco gasifier, or close too the same as the simple fire gasifier, Just curios how many charco units you have designed and tested thus far, Good luck enjoy the metal fab fun, be carfull and keep your safty glasses handy- I had too wash my eyes out a few times on my new dakota build, luckily no sharp splinters hit my eyes.IF and when i get this wood gasifier truck done built and ready for work, I want too build a tested proven charco design gasifier for my old pontiac vibe.

It’s a raw wood gasifier, hearth nozzles and dimensions are based on the Mother Earth News plans but not the way the air is delivered.

Edit: I answered when I just woke up today.

It has a regular Imbert style air jacket but has the MEN style nozzles. Lots of small diameter nozzles. I’m going to add one last hurdle of air preheating and call it done for that side of things. Gonna have a monorator hopper, I might experiment with a Joni style juice ejector using the cars exhaust but I’m not 100% on that idea yet. Apparently MEN also tried that method and used a PCV valve in line, maybe that assisted in draining going down the road? Who knows.

Thanks for Clearing my mind about your new design project, I bought the MEN or mother earth news magizeen that has the wood gas truck featured in it, see what i can find that air nosel design in the book. A small WK type heat exchanger would help heat incomimg air, as well as cool the out going air before it hits the cooling rack. Maybe less cooling rack needed with a god fit size WK heat exchanger. Caint wait too se my crossover TEMPS after my insulated burn tub and big WK heat exchanger.