Yes our distributor in Sweden is going to do just that. They are going adapt there dryer systems to ours and they are planning this as part of the heat source. We will reserve some the other waste heats for CHP use and also to input back into the gasifier processes. This will second gen HQRS on our systems with the secondary reactors.

I don’t think you -need- a tumbler. I bet you can do it passively with about 6" spacing for like 1" pvc with holes in it about 3/4 up and capped on top, you wouldn’t need to tumble. You really just need air circulation and some low grade heat. The problem with chips is they can get packed too tight and there isn’t enough airflow and it will create tunnels. With a tumbler you are stirring them up, the passive way you are just distributing the air. The tumbler will be guaranteed to be more even and faster. but more energy input.

Then you can probably use like a “solar air collector” for low grade heat if you want/need to split the systems apart. IE you want to dry but don’t have an immediate use. it is similar to the solar grain bin driers. You drop the moisture content from 25% down to <18% to prevent molding and starting a fire, then you can finish it off with the tumble drier if you need to.

You -might- be able to do the passive system without a fan if you can get it to draft a bit. It doesn’t take that long to dry out green brush sticks just packed in a 55gal drum in the summer like a day or two, with the lid and a nipple in the hole and a draft aid. It is essentially turns it into a solar dehydrator. I was thinking a couple of 4x8 sheets of foam insulation for panels with plastic over it but Here is a fancy dehydrator:

I filled up a row of firewood in here yesterday. The trees were felled, cut and split yesterday as well. I’m getting readings around 40% with the moisture meter. Today we are partly cloudy and I’m still maintaining moisture on the plastic inside the greenhouse. I want to test the wood every week to see the progress. I would imagine I would need to cut a chunk of a log to get accurate readings? I’m hoping to have decent results in 4-8 weeks. 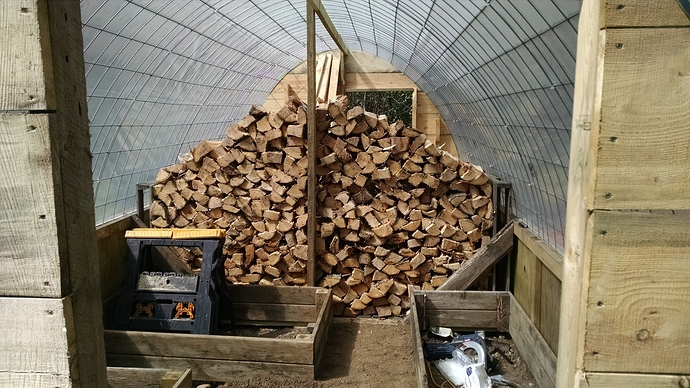 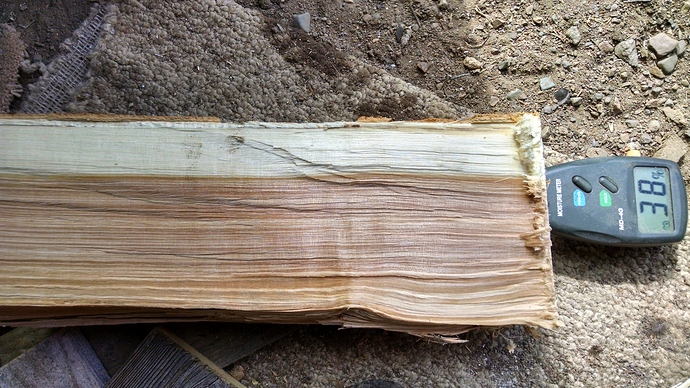 Looks good Bill. I think a big fan would be a great help in times with excess power to remove the water from the structure.

I don’t have a fan. I hope to let this dry passively with the breeze flowing through. Then I was wondering because it’s been cool, 60-70 degrees, if I should leave the doors closed until the moisture builds up?

I would definitely keep the doors open. I think I would leave it outside in the sun for a week or so before putting it in providing not a lot of rain in the forecast. Air circulation is everything for drying wood.

First that is the nicest hoophouse I have seen that turned out really well.

You might want closable louvers at the top to let heat out. It would use convection currents to pull moist air out for the firewood, but you may need then in early spring for plants to keep it cool. We always had to crank open the windows in the greenhouse on warm sunny early spring days. They probably make them, but you could probably use an arduino type of gadget so you can set it and forget it.

I suppose it’s quite possible it gets too warm in there. There last 3 summers, it hasn’t been any warmer than 85F. Last summer I just used it for wood. I put a remote thermometer in it to monitor the temps. I left the doors open and everything was fine. It’ll be primarily for tomatoes and peppers. I may build another one just for my firewood.

It is really about fine tuning temps to avoid heat or cold stress on the plants. I am not saying what you have doesn’t work and you shouldn’t use it. Just mentioning how other systems do it differently.

Is it staying warm enough during the winter for cool season crops?

There is no way the greenhouse will work in the winter. We spend about 60-90 days below 0 degrees F. I have a green house in hopes to start my plants 1 month earlier and have my tomatoes and peppers have enough time to ripen.

There is no way the greenhouse will work in the winter.

Sean, you’d have to appreciate the kind of cold Bill is referring to. Truth is, the heat losses are so great even with double or triple glazing, the light gain isn’t much worth through the darkest 2-3 months. Unless a person has insulating shutters, or other complexities, and artificial light will be needed to produce conditions for growth. Some battles are best avoided.

What Garry said. Also, I was referring to the style I built. We do get some warm weather but it’s not very long and the nights are cool. The greenhouse actually kept my tomato and pepper plants warm enough to ripen in the summer. The plants outside didn’t do so well. Year year our winter went from Oct 27th to the middle of May. Our last frost is after the first week of June. Our first frost is in September. In November this year we already had 6-8 days below 0F. When January rolls around, we have a 2-3 weeks at -20 to -30 F. The trip to the outhouse is enough for me some days.

What Garry said. Also, I was referring to the style I built.

Yeah I thought I was alluding to it would be a lot of work and the effort might not be worth it. Cool season crops like cabbage are typically grown. The geothermal heat keeps it warm enough to not freeze hard and they grow slow with the lack of light.

The style you have is meant for cheaply adding an extra 4-6 weeks in the spring and fall which is about what you are getting.

I know this is sorta getting of topic for woodgas, but since we ARE on the subject of drying things and keeping them warm, here’s a bit of input about using solar energy for such practices in west central Wisconsin. Back in 2014 our electric co-op put in its first solar photovoltaic farm. FWIW, we “bought” 500 watts of the farm and it produces about $7.00 per month to lower our electric bill.
Anyway, Here a graph of the output of the that farm for about the last 4 years. My point is that the “deep” winter months around here don’t produce much sun for drying anything.: