I wonder if you have the ben full yet. Haven’t heard from you in a while. Time for an up date.TomC

I wonder if you have the ben full yet

Hi Tom,
If you are refering to my fire wood prepping, that was all done during Easter weekend - finished same day I posted my clip. If you are refering to chunks, those storages are still full from last year, just waiting to be consumed.
There is always someting, so I haven’t had much time playing lately. Weather has been awful anyway. Still burning loads of wood, just to keep warm. Nothing but rain and snow, even below freezing most of the time. No green buds yet. I’m glad I finished up the wood when I did.
I have one surprice though - I’ll post pics on my gasifier thread, maybe tomorrow.
Have you seen any signs of spring yet, around the lakes?

You know me. I can’t wait to see what you have done. Spring has sprung === sort of. Lot of cloudy cool days with on and off rains. But the grass is green and just about to the point where my wife will start complaining that the oil and filter need changed in HER lawn mower… One thing she asks me to do and I procrastinate. I have been going out to the shop for a couple of hours a day although it is still chilly. Trying to get the truck ready for Argos. Haven’t started chunking up wood for the trip=== there just hasn’t been any sun to dry it. Don’t forget I am always waiting for your next post.TomC

One thing she asks me to do and I procrastinate.

Funny, we use the same word in our language, even though not very commonly used. It’s our youngest doughter’s favorite.
She goes to university of Linköping (300km south of here

third year outof five). She doing good, but she claims beeing good at procrastinating when it comes to homework.
She study biological chemistry. I’ve tried to steer her into fuels, which were one of her options.( I was hoping for her to specialice in gengas

) but as I understand she takes after her mother and she chose meds.

Me, I’m sitting here lika a veggie after doing 10 hour night shifts all weekend only keyboard jabbering (as SteveU might call it). Time to hit the sack. No reason to procrastinate.

The snow has been gone for a week and a half here. We get a day or two of 50-60°F weather with sun and then cold and rainy for a few days. If I don’t go out and work in the cold and rain, not much will get done.
I have four piles like this I cut to clear some land. These are ready for chunking. I want to make a corn crib style wood storage first so they dry out. 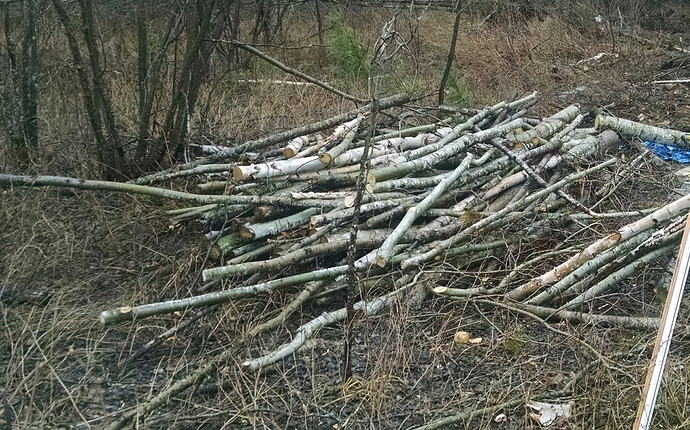 Nice pile, Bill.
Seems like a good week worth of firewood to me. Some pieces look a bit too sturdy for my little chunker. I try to chunk thin and fresh only, to save on the equipment.
I’ve learned that the sooner after felling you cut, split or chunk and let the wood dry, the faster it will dry. After felling a slime starts developing between the fibers in the wood (first stage of decomposition). This slime keeps the moisture in. Good to know but I know it’s easier to talk than walk.
I collect my firewood in the fall and let the pile get buried in the snow in my backyard until spring. As long as the wood is frozen the process stalls. First nice day of spring I start cutting and splitting. It’s just more convinient than harvesting in two feet of snow or hurry up in the wet mud between snow and sap.

Hey! I did hear my name mentioned.
You are OK J.O. because as you say you do use wood-for-power nearly daily. Heating.
Yes. I’m still almost daily wood using still. Less. Only 20-30 pounds a day now.
Had three 150 year record setting days warm not needing a wood fire this month.
Now back to cool-cold raining and mountains Big-hydro power making snows.
No personal hydro power possibilities here. Actually “illegal” to impound the water anymore.

My trees grow Free. Storing solar even in the winter here. We’ve only had maybe 8 PV solar days since the end of last October.
Some of my longest shift days working was 1991-1998 in a silicon wafer making Fab-plant. Communications and memory chips. Our rejects, breaks and scrap went to the PV makers.
12 hours base shifts that too often went to 15 hours with driven reporting, and overlap follow-up shift coverage splitting.
Ha! Make you old before your time.
A bit of not-work daily real person to person jabbering is the only way to stay sane.
Fishing cuts too deep into needed sleeping.
Real-person jabbering beats drinking, or drugging, or online gambling/gaming.

My “fancy” bucket guard is no good.

JO,
I just noticed from watching the videos again that your “Fancy Bucket” guard was serving the purpose of knocking the cut chunks off the blades so they did not make a second trip around and jam the mechanism!

Mike,
I’ve made a few small improvments since that video was made. One is an angel iron that knock any stuck chunk off the blades. The bucket is still there though, but only to keep the chunks from flying everywhere. I usually place the chunker on the trailer - the chunks end up where they are supposed to be for drying without shoveling or bucket emptying.
Right now I’m changing the chain drive from bicycle- to mc. At least 10 times sturdier, maybe 100

Went DOW errands this morning to collect stuff for my rebak chain drive conversion. I had to visit three different shops but in the end it payed off. Got a box full of used gears and chains. The rebak now has a motorbike chain drive and I no longer have to worry it’ll brake 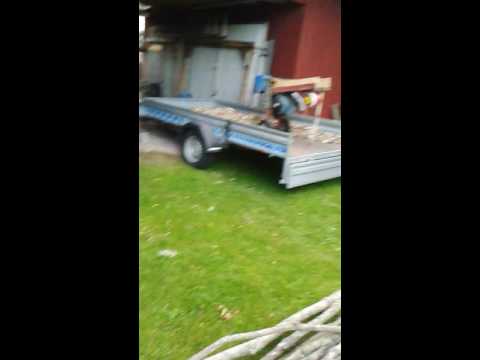 Looks and sounds great! You can fill that trailer quickly!

Good for you!!! Always getting R done. You said you used a “motor bike” chain. In the states that would mean a Moped I hope you meant what we would call a motor cycle— something like a Wisconsin built Harley-- Hud, Hud hud!! I think those chains take a lot of shock in a chunkier that they aren’t subjected to in regular roundy, round situation. In the mean time, you certainly have the perfect size wood for chunking. I am so envious. TomC

We do have quite a lot of Harleys here, but I don’t know where these chains came from. Most important to me - they were free, and a lot sturdier than the bicycle chains I used until now.
About the wood: It’s just a bi-product of firewood making, which you don’t get when heating with propane

Hi Jo
What diameter are the gears of your rebak?

Hi Thierry,
They are 120 mm, if I remember correctly,

There is such a satisfying feeling to watch that chunker run. Good work!

Hello JO,
If you find a few minutes could you offer a drawing that shows the blades attachment to the rotor and how the blades on the 2 (I think) rotors meet to do the cut. I’m tired of using my radial arm saw. Thanks.
Pepe

Hello Pepe,
There are many informative clips on youtube if you search for “rebak” or “stepkovac”. I linked one below. It seems these machines are used a lot in Russia and eastern Europe.
Most rebaks have machined rotors. I made mine the farmers way out of square tubing. This way you get four cuts per rev and shorter chunks with the same gear dia.
I made a drawing of how my blades are bolted to the tube. I can take some closeup pics when I get home if you like. 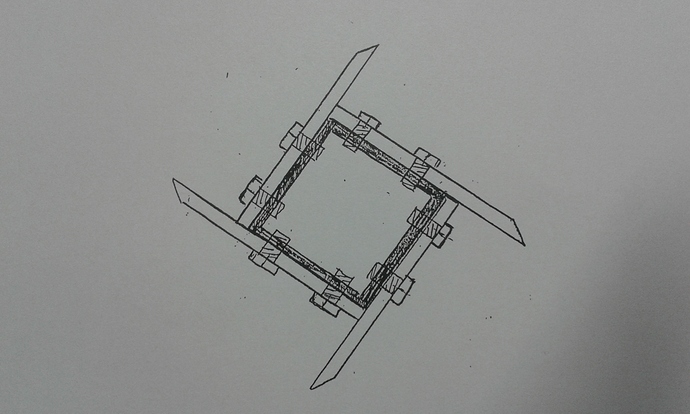 JO; Not that I’am going to build one but I am curious. Did you have to chuck the square tube with the blades attached and grind the blades so that they were all equal distant from the center and would not hit the second set of blades and were close enough to almost touch. ( Pretty long question but that is me) TomC

No, I made slots in the blades to make them individually adjustable. 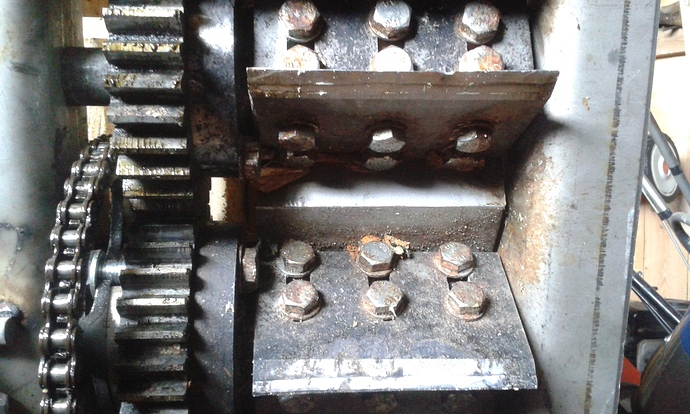