This will be a big game changer if the tesla valve will work for this type of application on the air intake for single and double cyclinder engines.
Bob

So it did finally complete printing and as soon as it completed I ran out to the shop to test it.

I didnt really notice any difference at all at first. I had two different length tube adapters and it really didnt show any difference other than it stabilized the lobing. As this generator is set up for wood gas and the stock air filter is removed and they all lobe once you remove the air cleaner.

The longer hose seems to amplify the pulsing effect and the first test were simply attaching the valve to the end of the hose just feeling for any difference with the palm of my hand. Then I tried attaching the shorter hose to the intake end of the valve. Thats when I noticed a difference I could actually feel with my hand. I tried with the valve in-between the two sections of hose then without. There is significant difference in this configuration.

I think I can improve this, the ramps leading into the biasing chambers I dont think are cutting into the back air steam far enough. I think I need to expand the area prior to where these cut into stream and it will work better. May need to double the amount of biasing chambers as well, I figured two would not be enough. This was just a test to see if it would make a difference. So I will redesign this here soon and print again.

Ok redesigned a single chamber dual plane version this time to save on printing time. Just looking to see a change before printing multiple chambers. I can always stack these single units too. As you can see I expanded the front area and increased the volume of the chambers larger than the pass thru opening. Im no expert on these valve just using common sense is all. Im learning in order this vavle to work it needs presure differential from side to the other. Adding backing presure to the intake side helps the back flow to redirect into the biasing chambers allowing it to work. 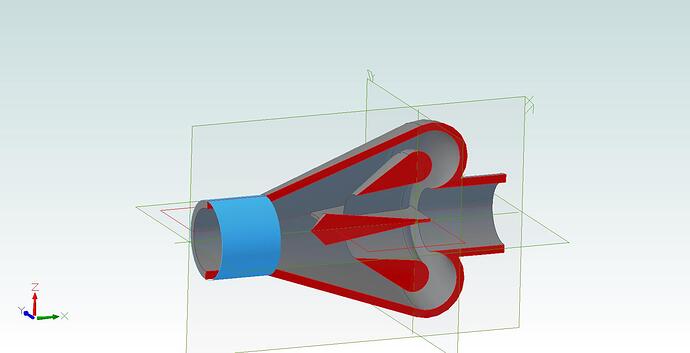 I stopped the print I didnt like the narrowing in the chamber. Here is the revised version. 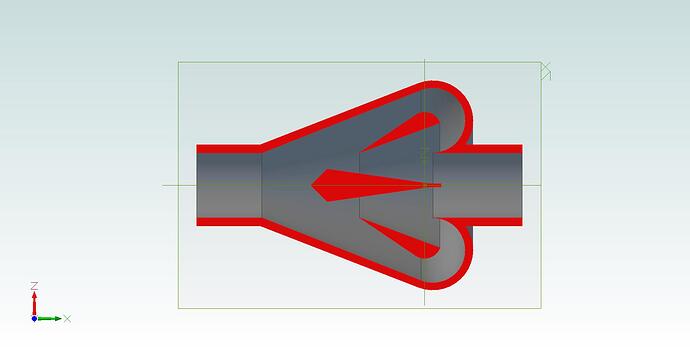 Ok well my conclusion is; It dont work!! lol. Someone had mentioned a reed valve and at first my thinking was, where am I going to get a reed valve? But then I started thinking about the gas mask we had in the service. Basically a very simple design using a flat plane diaphragm. I could pretty easily print this and even print the NPT threads to adapt to our mixer valve. So that will be the next design, but that will have to come later as I need to get focused on the VersiFire system for now.

At best the longer air tube is balancing the pressure pulse on the fuel gas side.so that fuel doesn’t leak out.

Long tubes create gas with more momentum. When the intake valve slams shut the pressure will surge. The longer the tube, the higher the surge (to a point).

A few thoughts to consider, or criticize as appropriate

On the average, the flow is from gasifier to mixer, air intake to mixer, and mixer to carb or intake. If the main problem is loss of fuel gas out the intake, the source of the problem is the momentum of the fuel gas as Anthony points out. Fuel gas keeps flowing when the intake valve closes, and heads out the air intake. If the air intake has a long enough tube on it, the excess fuel gas won’t escape, and will be sucked back in with the next intake stroke. Steve’s motorcycle air cleaner might be just right.

The problem might be made worse by a reflected pressure wave (pulse) from the closing intake valve. The pulse would be “positive,” or higher than the normal pressure at the valve. This might help push more fuel gas out of the mixer air intake. If the air flow into the intake valve slows as the piston reaches bottom dead center, then this is probably not an issue. If the valve closes fast, when air’s still flowing, it may be an issue.

Both the fuel gas momentum “pulse” and the intake pulse could be reduced with a device that allows steady airflow, but limits pulsing. There’s probably one on your engine already, but mufflers are usually on the exhaust, not the intake. If you want to know how big it should be, I would say, just big enough.

Which is to say, I don’t know.

A while back l rambled abput this pulsating on my BCS mower and how l think we can take advantige of it.

The gases from the sistem have a lot of inertia. So when the intake stroke ends, the gases slam in the carb and form a pressure wawe that has to go somewhere. Usualy thugh air supply. But if we put a expansion vessel on the woodgas side with a ruber membrane on top, the inertia wuld fill that vessel with the extra pressure. And the big advantige: when the next intake stroke begins, there is alredy some gas stored in the expansion vessel redy. Wich means the engine doesent need to overcome the inertia of a still standing gas in the sistem, more power… will be testing this when this white crap we had falling from the sky lately melts…

Yes exactly my thoughts. It would be like have an expansion chamber on a two stroke but on the intake side and it will act sort of like a super charger.

So this expansion chamber would be between the mixer and the engine. Would that also require some sort of check valve after the mixer?

Best if its as close to the engine as posible to utilise the “supercharging” effect of the inertia of the sistem.