So how will you fire up the trucks? No live demos?

Not unless we pull them outside. Now I have to come up with something to protect the floor from my oil leaks

This is the last email from Alex Weaver!Hello Gentlemen,

Just wanted to give you an update and ask you a question about the Fair coming up next weekend.

First of all, I wanted to let you all know that we have the car show inside a building at the Fair. This building will be locked at night and there will be security monitoring the facility during the closed hours.

My question to all of you is will you need to enter/leave at any point or are you comfortable leaving your woodgas vehicles at the Expocentre overnight?

Good luck to you guys going to the event.

Sure wish I could go.

Loading up hope to be on the road in a hour 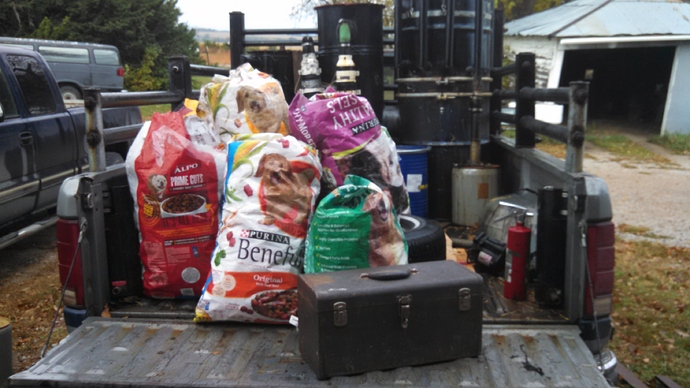 Stopped by the Expo Center and got checked in. Alec was very helpful. He also introduced me to the electric vehicle guy and while talking to him he told me to be prepared for all the questions coming. A wsy cool electric truck was there
Sooo when y’all talk to the big guy tonight ask him to look in on us tomorrow
Thanks

Well I have to send my apologies, I won’t be able to make it Tom!

It was day plus365 after Stem Cell Transplant Thursday so I had to get all my shots that we all get when we are kids all over again, DPT, Polio, Prevnar, Influenza and the list goes on! All the shots I got when I was a kid got wiped out with Chemo!! I knew it was coming but didn’t know it would be this hard on me! I’m hurtin for certain! Sorry Tom, was lookin forward to meeting you! Herb H

Herb
Never looked you in the eye or shook your hand but you do the important stuff first I understand. Heal well my friend

Bone tried tonight. The only time words weren’t coming out of my mouth was when I was shoving food in it. Finally got to meet Doug and Raymond R who came up with the SD80 saw dust gasifier. Lots of interest handed out 30-40 fliers. But most amazing only got asked the steam question 3 times. Try and take time tomorrow for a few pics. Bed time

Thanks for checking in Tom, sounds like there’s lots of people and lots of interest! Do you have time to see what else is there? Did you end up inside?
I have lots of questions! Herb H

Thanks for representing the woodgas community . We are proud of you . Please say hi to Doug and Raymond for me …

Not yet daylight here but about to fire up for the day .

Well Mr Wayne now I know how you feel after Argos
Didn’t get around to look at much did take time to set in on Doug’s presentation Sat. Sun after I got the truck in the building and parked I quickly walked away from it so I could check out some booths but most were unmanned didn’t learn much. When I got back to the truck was pounced on by other exhibitors wanting to know about it.

Met a couple from new Hampshire who had just received their book really enjoyed them.
A young lady who works for Oklahoma Dept of environmental quality who wants me to bring the truck to the route 66 car show volunteered Gray for the job

Can’t seem to upload pixs
Anyways lots of interest from all ages Some seemed ready to go home and start their builds.
Hopefully educated a bunch more destroyed some misconceptions and let them know there is something other than big oil

" When I got back to the truck was pounced on by other exhibitors wanting to know about it."

When they ask you to explain how this thing runs, you could just say " It runs real good "

Chris and Jennifer from New Hampshire here. It was really great to talk with you and to see a finished, successful build first hand. Thank you very much for taking the time to do the show. It was too bad the others couldn’t join you because I don’t think I ever went by the area when you didn’t have at least 1-2 people waiting to talk. There was a lot of interest.

It was not us that just received our book. My premium membership expired just about 1 year ago, so it has been a while since I received my book.

I have not started my build yet, but it will happen when time allows. I have scrounged most of the parts and I have a couple options regarding the donor vehicle. Looking forward to starting the cutting and welding but while still working full time there always seems to be higher priority projects around the homestead.

As I mentioned, if you (or anyone on the forum) can put me in touch with others in the New England (Northern New Hampshire) area that are seriously working on or have finished a build I would appreciate it. I don’t find time to monitor the forum regularly so I will leave an email contact here and take my chances on not getting too much spam. chris f shepard at gmail (no spaces)

Note for Wayne or Chris…
You should have overnighted Tom a couple cases of books. He would have sold them easily. He did a great job representing the community and he certainly increased interest (and probably some future participation) by bringing his vehicle.

As I mentioned, if you (or anyone on the forum) can put me in touch with others in the New England (Northern New Hampshire) area that are seriously working on or have finished a build I would appreciate it.

You should have overnighted Tom a couple cases of books.

Good idea! I’ll just leave this standing offer, anyone who wants some books to sell, let me know, we can work out a commission…

Thanks Chris for the kind words. Talking to you and Jennifer was like talking to old friends. That happens a lot with this group though