Short video of a hopper bridge on the way home last night, interestingly if I refuel with half a hopper full in about a mile and a half I will get a hopper thump like clock work every time. I would assume this is due to the much larger hopper being able to ingest a lot more oxygen while refueling. The Toyota does not care when it gets refueled it has never thumped while driving once. Puffer lid does its job nicely and last night I saw the fireball puff out in the mirror since it was dark out. Boy oh boy did the guy that was tailgating me back off in a hurry!

Interesting, I have been draining all the consates when I get home each night and tonight I get to do my first tar dump. Right about 900 miles on wood so far. I was never forced to do a tar dump before in the toyota? Big hopper less tar consumed in the fire?? 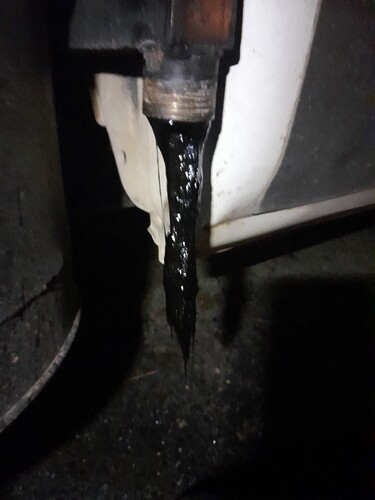 Yuck. I don’t think I fully comprehended what you guys were talking about with tar. That would definitely screw up a valve train.

What was the ambiant temp when you were dumping? Is your tank close enough to hopper to warm up stored tar enough to drain? The picture makes it look like it didnt drain very well or at least not very fast. Wish that was a video of tar draining.
How long did it take to train… sorry for all questions. Just wondering how tar will drain in my temps up here. Im close to starting the construction of my hopper condensate tank and am wondering if i should form tank to wrap tight to hopper (sort if a half moon shape on one side) or if i need to omit heat shielding in hopper in that area to alow more heat to transfer to tar tank.

Thoughts? How are peoples tar tanks draining were it gets extremely cold… Marcus said he made 900 miles before dumping with this gassifier, how long can you go with toyota? Ive read before but dont recal how often @Wayne said he goes between dumps…i.e.how many miles?

I get a lot less tar than I once did because I am using hard wood fuel now.

Each trip to Argos is about 1500 miles and I don’t dump on the trip. A little more often around here but never a lot.

Keep in mind you can use your reverse blower on a warm gasifier and force the hot air down through your tar tank.

Edit .
Just to be clear . I drain the water off often ( control from the cab.) but let the tar stay until convenient to dump

Thoughts? How are peoples tar tanks draining were it gets extremely cold

I bring the tank indoors over night to drain tar. The bottom layer of tar accumulates slowly and only a couple drainings every winter are needed. Depends of course on wood type, the size of the tank and your driving habits.
It still doesn’t hurt having the tank mounted close to the gasifier. That way the water can be drained at every shutdown when still liquid.

What was the ambiant temp when you were dumping

About 28°f when I drained last night

It is warm to the touch, I have not put the temp gun to it yet but radiant heat from the bottom barrel and the condesate itself was enough to keep the tar movable

didnt drain very well or at least not very fast. Wish that was a video of tar draining.

It moved on its own, this picture was the bottom of the tar plug which has the most solids in it from. The construction faze and is the thickest tar. It moved very slowly on its own and I waited about 5 minutes before I put the map gas torch to the tank and it came rolling out like nothing. I do plan to video it next time I was not prepaired to do it this time. Once that tar is heated it comes running out like water. Once the first plug came out I turned on the reverse blowers and the heat being pushed through had it all emptied about a half a gallon in less then 10 minutes

I have only put down maybe 200 miles in this truck that was above freezing temps. I beleive this bigger hopper does more cooling and thats why I harvested so much tar so quickly on this truck. Couple that with mid 20°f daily 55 mile drives in the dark its got a good opportunity to cool that hopper down fast with wind hitting it

Thanks for all, apreciate the insight.

Met up with a fellow trapper afterwork to sell some beaver carcasses and truck sat at low idle about 500rpm for a solid 30 minutes while we had a good bs session. Temps stabilized at 650 in the crossover, hopper got to 170. Took off no problem like its supposed to. Getting minor better milage now the charbed is settled in just under 10 bags of fuel per day. Insulation is building up in the bottom barrel nicely, if only it had more timing!

Neat story, the guy I met up with I just met last year at the trappers rendezvous and he is heading to Idaho for trapping, and is dropping off the beavers he bought from me with a fellow trapper near elk city. Mentions “ya he built a cabin up there this year so he can trap all winter, he does a lot of damage control with wolves for the local ranchers”

Wait a minute, does you buddy do youtube?
Ya ya he does its lobopredator control I think is what he calls it
Ya I thought so I have been watching him for years, watched his whole cabin build series the other day
Yep thats the guy!

Well cool I met the friend of a big time youtube trapper, sold the carcass’s for more then I can sell the fur for, and hopefully get to see them used to catch a wolf. Pretty neat

Also this guy had seen the toyota last year and thought it was very cool, and he really liked the v10 as well. Even said he would hook me up with his doug fir dunnage from work to keep the trucks fueled!

I swear, trappers and woodgassers are some of the nices folks I have met

Thanks for the report Marcus .

In fifth at 2000rpm I’m right at 65mph. But even with the 9" restriction its runs best temps (sub 1000°f) at 45-50mph. I think that has some to do with running through the gears at a higher rpm between shifts and that brings the temps up faster, where as the automatic is a smooth rpm shift. If I use gasoline to get up to speed I can switch to wood and cruise 60mph with reasonable temps in the crossover. But off the line on woodgas by 55mph its getting hot.

Keep in mind this is also in the mornings when people are wanting to boot scoot and boogey to work. 55mph is the speed limit and most people are doing 70mph, I let them pass when I’m cruising but off the line to keep pace its easier to switch to dino juice for a few seconds and switch back when I hit the speed limit. This is so far resulting in about 30 miles to the gallon driving, same mileage my wifes little chevy aveo gets.

The real struggle now is keeping up with the wood pile. Without a very steady supply of wood without nails I am running low on fuel, and spending to much time de-nailing vs chunking. If I hybrid a lot I can make a hopper of wood last all the way to work, at the cost of about 20mpg fuel use.

All that being said that means that each feed bag of wood equates to a 5 dollar bill. Equivalent to cost of a gallon of gasoline right now, but carries the big v10 a lot further, and a lot more smiles per gallon

Dollar for dollar, what a person makes at a decent paying job is always going to be far more by the hour than what he gains from any self-sufficient effort. Garden, wood heating supply, driveonwood supply, If labor became viewed as it’s own reward and was measured in personal satisfaction separated from what it was monetarily worth per hour then maybe some sanity would return to people lives.

Tom,
When you consider that you pay taxes to earn money and pay taxes to buy things and services, I wonder if sometimes you come out ahead doing things yourself. Also, many people get paid a lot more for their time than I have-- and you are paying for peoples insurance and benefits. 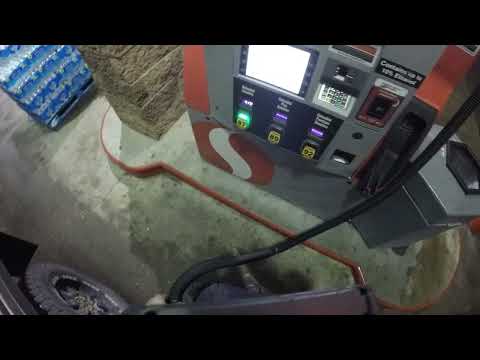 That’s a first for a V-10 Dodge Ram truck in Washington State getting over 36 miles per gallon on gasoline. Lets see if that record keeps improving as you put more woodgas driving miles under your belt.
Chiching $$$$$$$ savings.
Bob

Thats better milage then the wifes little chevy aveo, and I outweigh that car by a solid 4000lbs. Cant complain about that

The real struggle now is keeping up with the wood pile

It’s a bit of a drive, but if you want to chunk in Sandy you are most welcome.

I much appreciate the offer chuck, but I would be out of fuel long before I got to you at the rate this truck burns through it!

Marcus have you tried a duck tape gasket like Wayne uses on the puffer lid? Or tried greasing the gasket to keep it from gluing to the rim?

Grease it every day still sticks. These buckets I used SUCK, I would not recommend them. The lid will bend its so thin when the gasket sticks