Picked up a new hobby, (FEMA Gasifier), and started welding

Now, when I am going to put this together, is there some issues you would like to warn me about? Operational check list? Or to do in right order?

This one I understand, TO not to hook it up to my generator right away, but smoke it out few times.

Look for the High Temp, usually it’s Red in color. Has a temperature threshold of about 600°F

Don’t use it anywhere it could get hotter than that temp, the heat will break it down and you’ll ruin your engine. Jakob North has had that happen to him.

You should definitely get used to welding, or filling your welds with brazing. In other gasifiers there’s many places you can’t get away without welding.

I would say for the FEMA if you’re intent on trying it out, preload the bottom half with charcoal, and above that a 50/50 mix of charcoal and wood. The charcoal will help absorb moisture from the wood.

As far as tar goes, you can’t exactly filter it out, it’s best to condense it out using a cooler.

Ok, is grafit grease any good for anything with this project? Thinking of sealing some threads on those drum bugns.

What about this “syklone” or ash remover, will it work as such? Input is 4-5" inc deeper than the exit pipe at the cylinder, no incoming angles there, just plain pipes openin after 90 degrees bent.

As far as tar goes, you can’t exactly filter it out, it’s best to condense it out using a cooler.

I would add to what Cody has said. If the tar does gets by your Charcoal bed the hot lobe zone in the gasifier and is not converted into good gases, then that tar is going to move through your gasifier system. It will collect with the soot in the walls of tubing and condensation tank and keep moving to the filtering system. Sawdust, woodchips, hay grasses, wool what ever you use. If you do not catch it there and you probably won’t, it will make it way to your engine with the soot. This is why I am never in a hurry to start up my gasifier and just go down the road with out making sure it is up to the proper temperatures in the gasifier.
A small minimum amount of tar and I mean a very small amount of tar can pass through the engine and it will not hopefully not harm the engine by sticking up the valves.
The best way is not to let tar pass the hot lobe zone in the firetube area in the first place. 1000°f to 2000°f hot lobe zone is required for this competition of tar cracking to good gases.
If you DO get tar into you gasifier system a good water clean out of the cooling tubes, condensation tank, filter tank, and piping up to the engine would be the best thing to do.
How can you tell if you have made tar. It is sticky even when mixed with the soot.
Here is one practice I do when I am done running on wood for the day. I switch over to gasoline and run my engine on dino fuel when I am dump my condensation tanks I have 2 of them. Yes, yes I know am not a purist and just only run on wood gas only.
I can if I ever need to, but I do not need to. This is the same with many members the DOW site. Right!
I also change my filter hay more often then most. I open my hayfilter container to check it and dump a few buckets of hot water to flush the hay and wash it. Make sure you open the drain to drains the water coming out of the hay will drain. This will also flush back to my condensation tank so the drain is open there too. If I put enough water on to the hay washing it down 10 gallons should do it of hot water.
These are some the extra steps I take to help keep my gasification system clean of tars and the soot.
Bob 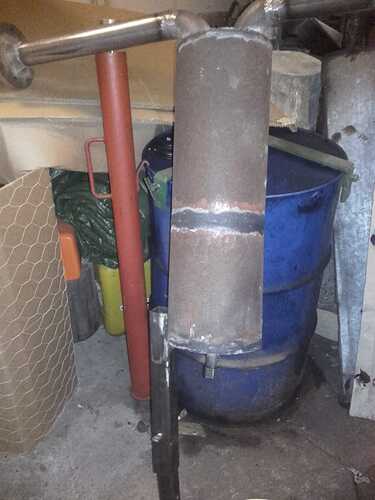 This one has some cool flanges on both sides, intake and outside, just thought it would be easier to fit new one when the time is right. Gas cooling and ash removal “sycklone”.

This will probably behave more like a drop box than a Cyclone. Drop boxes aren’t bad, just a different way to get the heaviest of soot and charcoal pieces out of the gas stream.

A cyclone has gas entering the side, and exiting out the top, or some have been the opposite. 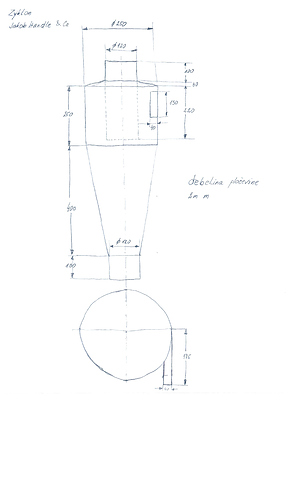 Yes, a drop box, that more likely is the case, there won’t be any gas cyclones cause it only delivers gas and opens up to bigger volume.

Ok, I took the time to assembly everything up and prefixed some air leaks. Tested the airflow and it seems to be going towards fan,

Went also crazy and burned some sticks and coal in it.

What would be the right amount of air to get gasification going?

Totally closed seems to suffocate it, so it seems to be “tight”, I still expect to find plenty of airleaks.

High Marko V welcom to drive on wood, Good luck with the fema gasifier experiment, as you probley heard said, That the fema was a tar maker, I dont know about the fema, never tried building it, though since Wayne Keith Design has been Very Well tried and tested, i went and spent my hard to come by time and money on the book have wood will travel, I also bought the book called -The wood gasifier builders bible. So far all i have built is two -Have wood will travel - wayne Keith gasifiers- on for a 3/4 ton chevy and one for a 6 cyl v6 s10- both worked well as for tar, i never had sticky throtle plated at cool down restart, so tar free, as long the wood that you run through a gasifier should be about 20 % moisture, or good and dry, On the other side of the time and money for welding and materiels, a charco gasifier can be built much easyer and cheaper and much QUIKER, THere were several hundred thousand of them in certain states or places in or around germany, for the reason they had trouble makeing tar from the type of wood that was available.

There is several builders of charco gasifiers here at DOW / drive on wood. Matt Rider is one the other guy is cody that builds charco gasifier units. IF it were me i would change coarse and build a WK GASIFIER- or a charo gasifier, there is no tar too deal with. and they are much easyer too mount in a small car or truck,