the weight the cost the chances for leaks and size will multiply…thermal expansion and reduction will cause leaks…the more intricate the cost goes up…not to be a downer on your idea but there are other ways to add power. I have thought about building an electrolysis tank and pipe in hydrogen and oxygen from splitting water …with an on demand setup…just to boost the btu’s of the gas before the engine. had a setup on a 454 chevy pickup that took up the space of a battery…that would put out about 1-1/2 liters a minute…was trying to boost my gas milage…but I didn’t take into account that the oxygen sensors would read the extra oxygen and add more fuel…so in theory it worked…but in reverse,every time I used it my fuel milage dropped…

I agree that the added complexity outweighs any possible gains in Sam’s idea but I’m not one of the innovators here. I am interested in your electrolysis system Dennis. I have built electrolysis rust removal set ups but have not seen anything that would allow it to be used to amend IC fuel. This science project set up was the only thing I could find. 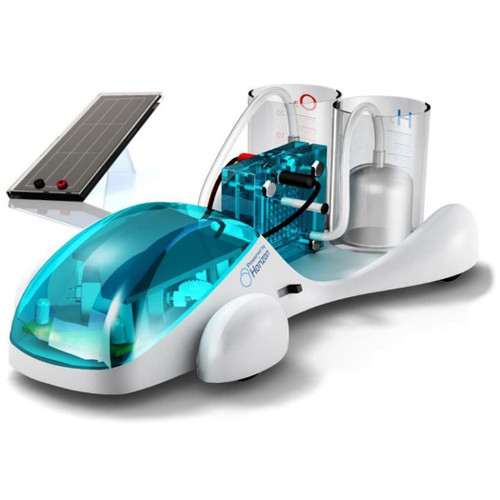 something similar to what I built.

If you add an oxygen concentrator before the intake of the gasifier; it will have way less overhead than HHO electrolysis. The Oxygen concentrator will eliminate the nitrogen or at least reduce it. Atmosphere is 70% nitrogen so eliminating any amount will equal significant gains. Less nitrogen = more H2 and CO in gas composition. You may need to replace this nitrogen as well, high temp steam could be a good replacement and it will convert to H2 and produce CO while reclaiming heat. Less nitrogen = higher energy dense gas. Or you use your AC system to chill the gas, or you could do both. Gas expansion is a big deal. Fill a 2 ltr bottle with wood gas and throw it in your freezer and see what happens. Then imagine that expansion at the volume of a V8 at 1800 rpms.

one could do a simple experiment with a small oxygen bottle and meter just a small amount into the gasifier to eliminate some of the atmosphere. It be very easy to do just be careful.

Getting gas from wood with high energy density is the goal of all of us and I agree with you Matt that oxygen instead of air would help to make better gas. But how to get pure oxygen? This is again a wasteful process and if we ask why to supply oxygen or air to the gasifier at all, the answer is because of maintaining a high temperature in the process, well, if we approach things from the point of view of maintaining this temperature (good insulation, good heat exchange, dry wood) , an equally strong gas is produced with a minimum content of nitrogen and other inert gases, and this is my way.

It would be easy enough to feed oxygen out of a bottle or run the gas through a chiller to try and experiment but the problem is that as backyard builders, our results are going to be qualitative. Doing any quantitative analysis requires expensive equipment and a level of expertise in using it. The breakdowns in the DOW book are a baseline but I doubt anyone is going to be able to sit and record incremental additions of various processes and amendments, as interesting as that would be and actual changes could only be measured with a dynamometer.

Thats why I dont bother with any attempt to get add more power to the engine. Little truck / big engine swapped = big power and woodgas burn outs!!

Yup that’s right big stock engine at least 50% bigger then you need for the vehicle and towing. Then add the wood gasifier to it. If my 2003 Dodge Ram 1/2 ton ever needs a new engine I will find a larger OBD 1 Dodge engine and put in the truck. I will not rebuild the 4.7 L engine, it’s not worth it.
Bob