Trawling Youtube and found this (Spanish?) video of a small block Fiat pickup running on charcoal gas. Not great quality and you have to really watch hard for the various components, but…

…thought it would be a bit of inspiration to the Brits on the site, as we have nothing but small engine vehicles to pick from on autotrader! 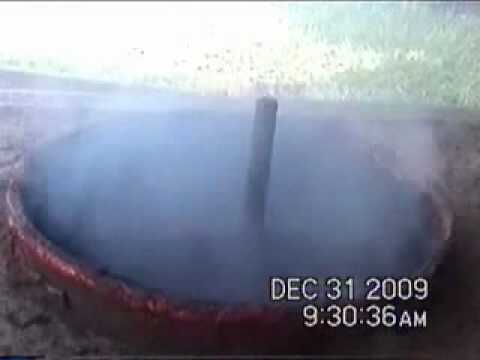 In theory, this is what the gasser is mounted in. Who needs a Dodge?! If I read it right, the guy was getting 10km per 1kg of charcoal (6.2 miles per 2.2 pounds of charcoal) Looks like a repurposed antique not a new build; that cast iron hatch with the screw on seal looks ww2 era. This is more the size I want to convert. Around here most of the roads are dangerous above 80 k anyways. Wish we could get our hands on something that size; closest I can find would be a 2.2 ranger in the late 80’s early 90’s… Great link, thanks, David Baillie

I really like the WK gasser, but it is sized and designed for large chunk wood and big beastie 4x4 pickups. I feel a small, simple and lightweight charcoal gasser is what I should be looking for. Especially that the sort of pickups that the American crew convert will cost a bomb to tax/insure/mot, if you can find one in Blighty. They’re mainly ran by the footballer wannabe crowd to enhance ‘manhood’. However, small block hatchbacks with engines similar to this little Fiat are ten a penny. Drag a little trailer mounted setup and your in for the win. As long as it can haul at 50mph your plain sailing, mainly due to the towing speed limit being 50mph.

Funny, what Wayne Keith considers an every day work horse is what is considered as a status symbol on British soil. A bloke in my home town has a Ram V10, and my god when he drives it he’s an absolute tool. He must be sporting a “trial size”! I’d love to see Wayne take it for a days work and put a lick of dirt and dents on it. He he…