We had very nice weather this weekend, especially for us Northern guys and gals, not too hot and not too cold. We owe a super great big THANKS to Mike Reynolds who stepped up and did the background organizing and made sure everything ran smoothly from startup to cleanup. Thanks Mike.
Also a big thanks to all the ladies who kept us very well fed!!
Here are some pics. 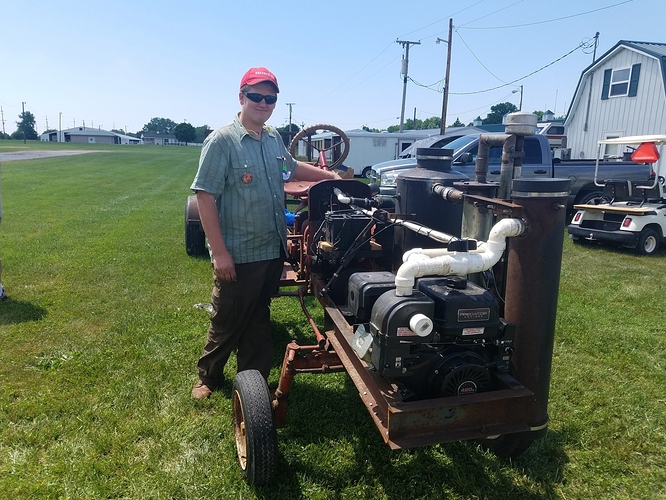 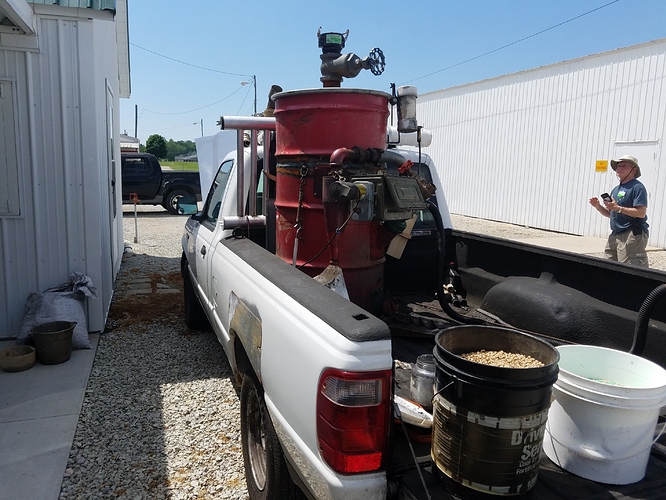 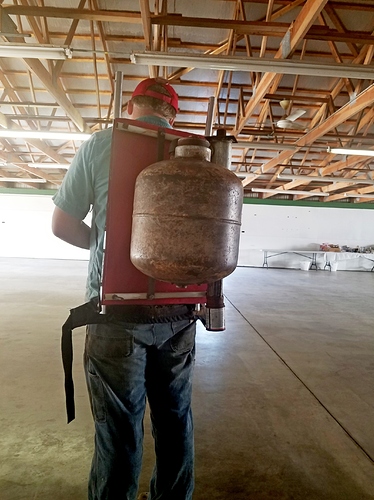 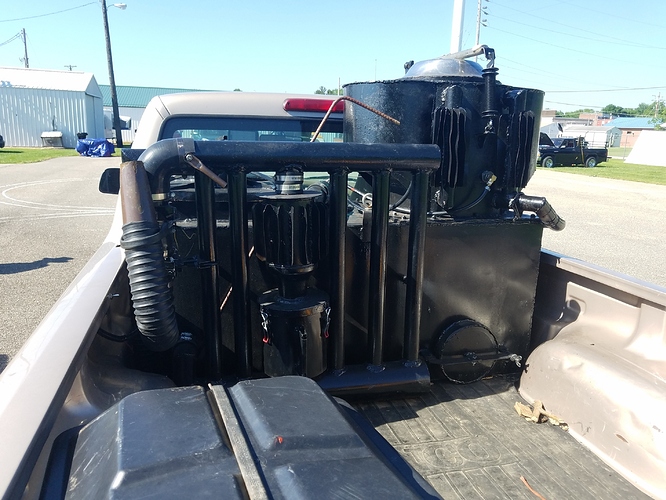 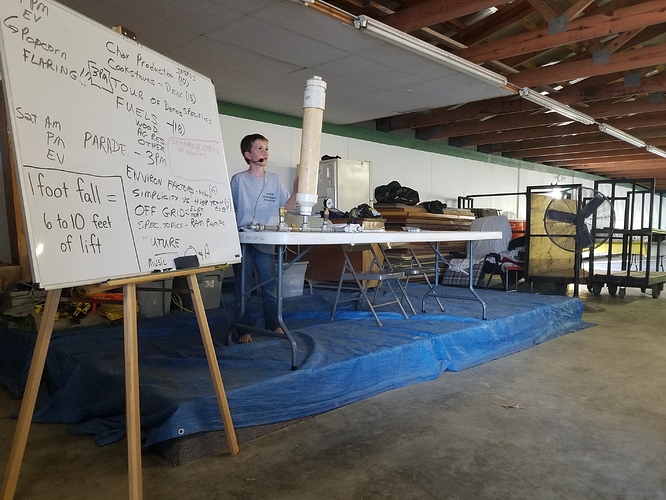 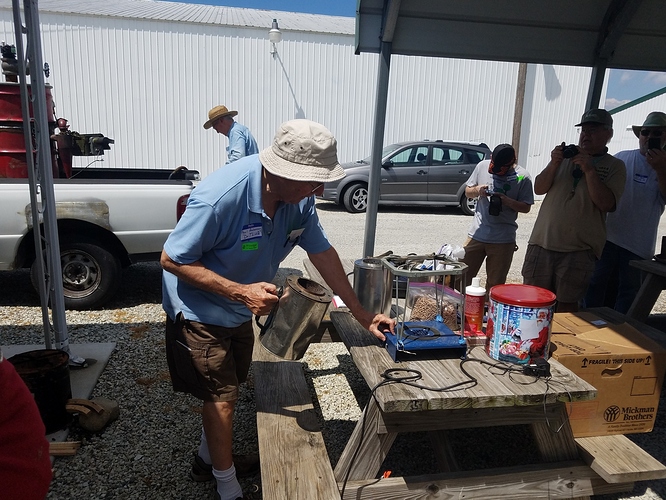 Back home in almost heaven, had a great time, thanks for the great show!

Made it back home, we had a really nice wood gas meeting, enjoyed the wood gas famley,and drive on wood folks. thanks too all who helped make it happen, hope we have another meeting next year.I plan too have a wood gas truck ready too bring next year.It was good too have the banjo and gitar/ violin. Folks playing the old time country music after a pleasant weekend.Thanks too those folks too.

Thanks to all the people @ the 2018 Argos edition for the warm welcome…
When asked if i liked it to be there my reply was:
“i feel as a weed addict (pothead) in the middle of a cannabis field”
i couldn’t have been more happy
Meeting all this lemon chewing people, what could you wish more ?

The morning after Brian’s first flare, he was building his gasifier on site, he found his well deserved lemons under his pillow… ( Lemon fairy ?? ) His flair was huge, so where the lemons to soot the pain of his big grin.

uploaded some clips from Chris live…

Proudly taking home a copy of Wayne’s book, eager to start building one… 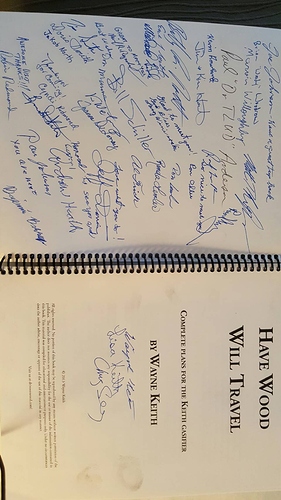 Here’s a start of the group photo album. You should be able to add your own photos, please do. 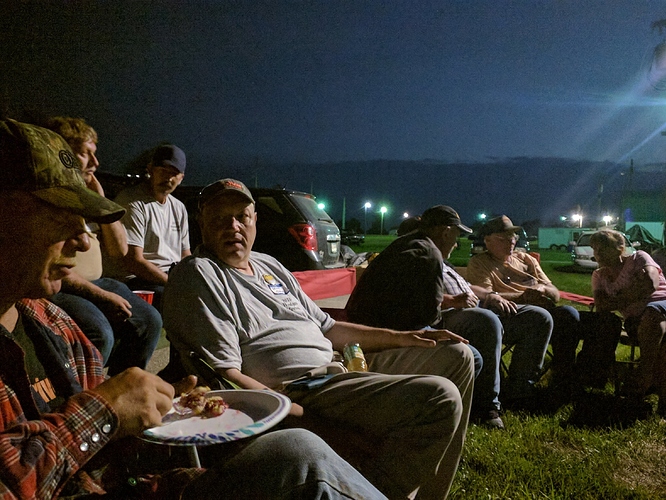 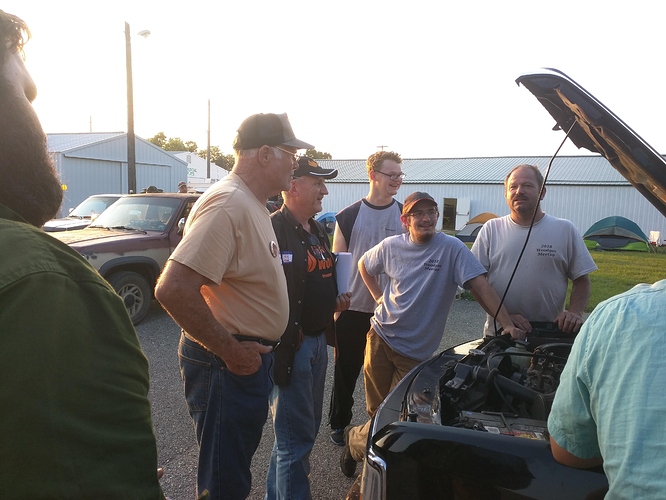 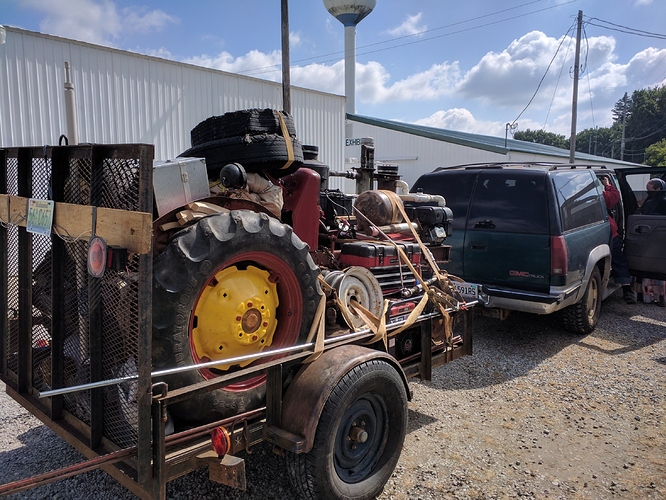 The pizza bus pretty much stole the show when it showed up. It’s not a wood powered vehicle, but it has an on-board wood fired pizza oven! We have to get this guy to make us lunch next year. Plus his slogan is great… 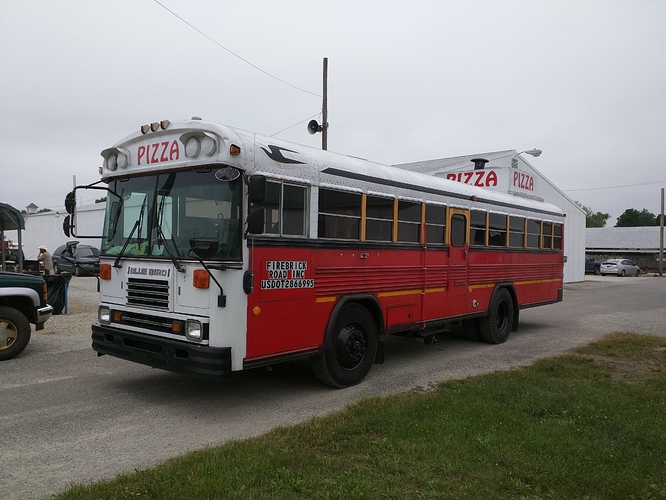 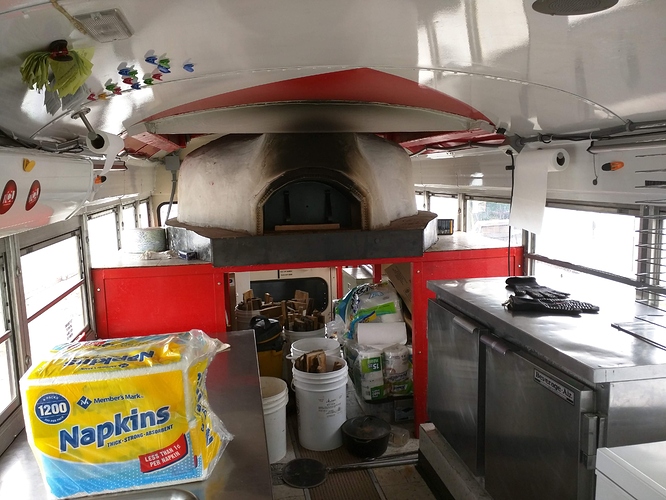 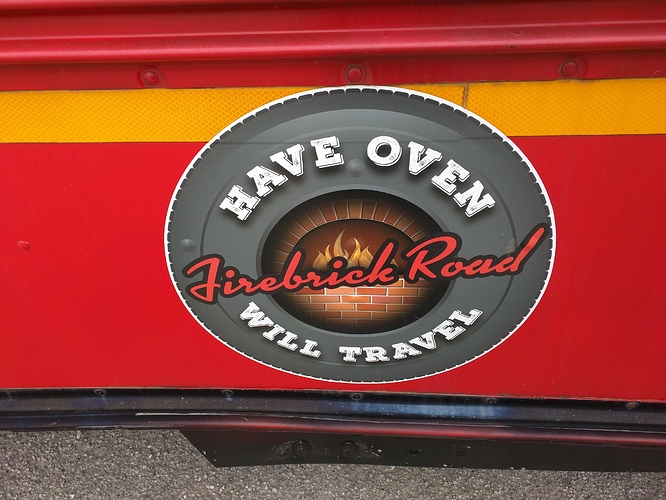 I want to make a special thank you to Ron and Ronda Lemler. They have put their hearts and souls into this event for the last seven years. Ron supplied us with literal tons of kiln dried hardwood chunks, perfect for every variety of gasifier. Ronda took charge of the food, working with the fairgrounds, and keeping the books down to the penny.

Most of you know there was a massive fire that took down the Lemlers’ pallet mill a couple years ago. Ron didn’t give up, he prayed about it and decided to rebuild at a smaller scale that he and Ronda can manage easily. He’s continued to bring wood, but his old supply is nearly gone. We need to come up with an alternative supply, or just have everyone bring extra to share.

Ron’s iconic woodgas truck has been in and out of the shop for the last couple of years. The oil pump screen got clogged with gasket material, and the entire engine needed a rebuild. He’s currently trying to get the bugs worked out of the woodgas supercharger. It didn’t make the show this year, but the hard working tractor was there, and Ron put in several hours of work moving wood around and giving hayrides.

Thank you Ron and Ronda, your years of work on this event have paid off in spades. We’re all very blessed (and a bit spoiled) by your efforts. 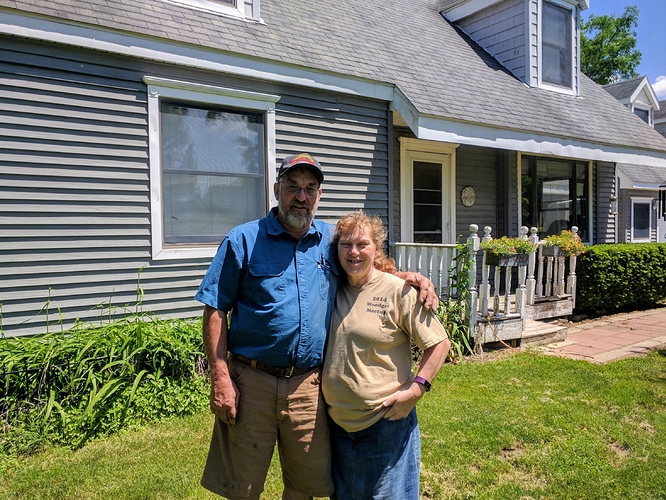 That book will be a collectors item with all those signatures. Looks like you had a blast. Wish I could have made it but farming and peojects here make it hard for me to get away.

Chris if the pizza bus stays for the entire show next year he might leave driving on wood. It could be the payment for his services…

Rather than spending hours editing, I am uploading (to the Google Album) every picture / video taken by me. I haven’t even looked at them all yet!

Actually, I think I clogged up the works. Stay tuned…

I don’t know if this is the proper thread for these videos ? This is short videos of the trip to and from Argos .

Caught Mike working! ( Or looking for a snack) 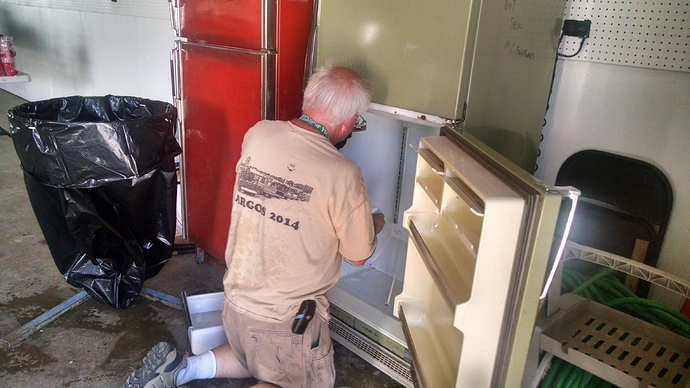 Probably checking out his new wood storage bin to determine how long it will run a gasifer. Letting the frig run out of beer could be dangerous in a room full of DOW people.

Actually, the atmosphere was intoxicating… no alcohol required! 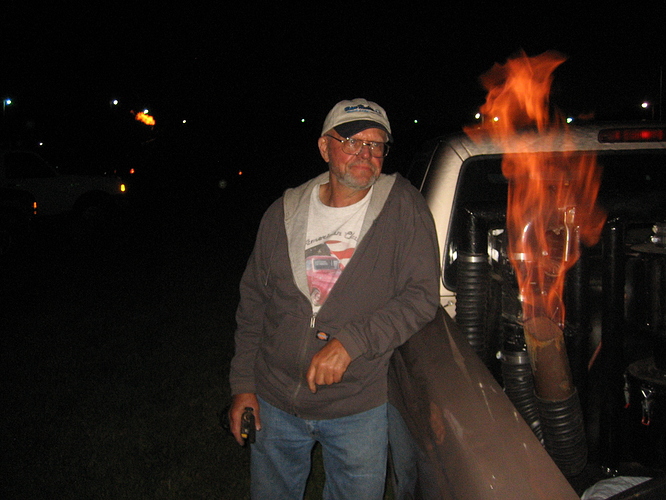 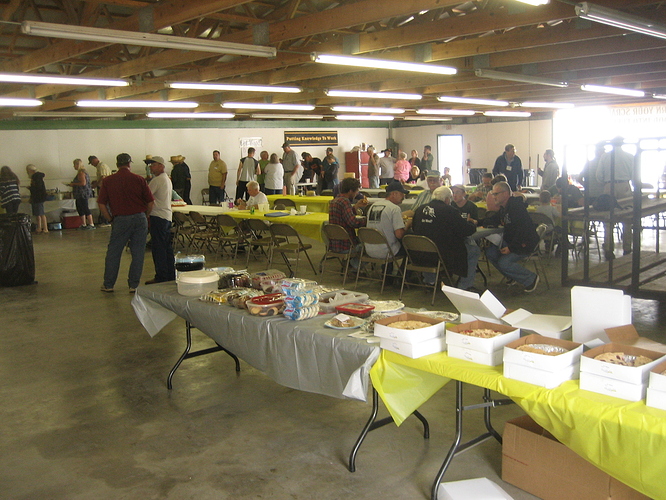 The flare looks a lot better than I do!

Thanks for the nice vidio’s driveing on wood. Now i know i am a petro bum,driveing down too argos on gasoline.Hopefully next year my wood truck will be operable on the brake light wireing and fuel pump buissy finishing up job started on, last minut snags.

I was wanting to show hot fill ups without a lot of smoke along the trip . No one took much notice of me while filling .

Good afternoon Wayne i seen no smoke hardly but a little tini be the one time, i got some practicing too go too get that good at loading trinkets,or i mean it could be monkys if no smoke seen.