Anyone run a 4-wheeler/ATV on wood gas? A lot of my neighbors have them, and starting to think it might be worth trying. Not sure in terms of HP or what they have, I think most around here are 250 cc.

What size of system would we be looking at?

There was a fellow on youtube who had one. I’ll have to see if I can find it again. 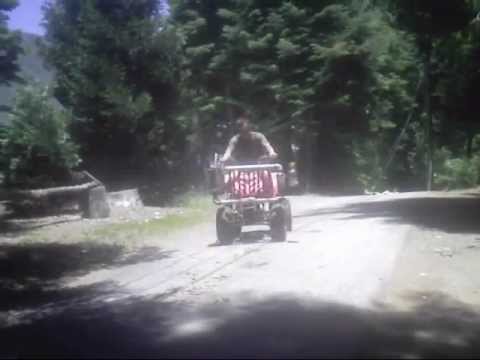 That is a great project for your Victoria. I run up to 8hp on my little 4" pellet burning Isabella. Victoria goes up to 15hp.

The problem I found is that chips don’t feed very well in anything smaller than a 6" hearth. There is too much wall friction and the nozzle rings get too small because of the replaceable nozzle tips.

I’ll need to do some research and see how many HP these ATVs are around here. At the very least, we could test it on one. I think I saw online that the 250cc are usually 15-25 HP. So, Maybe a bit much for the victoria, but I could do a slightly bigger one, like an 8" or so for a bigger engine.

You should have seen Frau Victoria blow holes in the grate when running a 1600cc VW engine pushing 5.5kW on pellets. No tar, though! : )

Funny enough I just started working on one. Charcoal for me of course. At this stage I’ve run it off the tractor’s unit and have started mocking it up. I’m using a 10 gallon hot water heater tank as the unit. Lots of pipe fittings already welded on. The rest I have on hand… Interesting, that’s well within the limits, then. Now I need to find one around here and test it out!

Funny enough I just started working on one. Charcoal for me of course.
At this stage I’ve run it off the tractor’s unit and have started
mocking it up. I’m using a 10 gallon hot water heater tank as the unit.
Lots of pipe fittings already welded on. The rest I have on hand…

Charcoal seems like the easy way to get it going, but I have a new Victoria coming soon, so I want to test that, of course. Also, there’s something awesome about going with wood vs charcoal, a lot less pre-processing. Any idea how much HP your Kawasaki has?

Is that a 2 stroke? Sounds about right if it is. There are twice as many power strokes in a given time period over a 4 stroke.

Abe, I’ve had this discussion several times. If you have use of the waste heat then charcoal for small mobile applications will win hands down. Total weight, turn down ratio, startup; You trade total power of the wood for just bomb proof flexibility. I would love to try one of Stephen’s beauties to challenge my assumptions maybe someday…
No idea of HP its a 360cc though
David Baillie

If you have use of the waste heat then charcoal for small mobile applications will win hands down.

That’s the problem I’m running into at the moment, I don’t have a lot of uses for the bulk heat that comes off the charcoal pit/barrel. It’s had to match it up to anything beyond heating a big space or some water, and in my climate, we don’t need anything hotter!

I think both have their place. And if you could work out a good charcoal process that can effectively use that heat, then you have a good system, for sure. The added infrastructure of making charcoal scares newbies, I think, just because it’s even more we have to put together, but you save on the filtering and cooling.

I’ve got one of Stephen’s beauties headed my way, so I’m super excited about getting to test it out in a lot of applications. An ATV would be really awesome to run with a Victoria, if for nothing else to say that I did!