A Dualfuel running on charcoal

This was how the first winter at the new bush camp went. I had no money at all. I cut all the firewood that winter with about a gallon of gasoline. I needed the gasoline to start the producer. The wind was so horrible, I never could light paper or birch bark and get the producer going. I even tried bringing coals from the wood stove. That idea was a fail because I had no lighting port, and my tuyeres were too small. Still, in spite of everything, all the poverty, and duct tape, the setup worked really really well. The colder and nastier it got, the better the engine ran.
That was then, this is now. 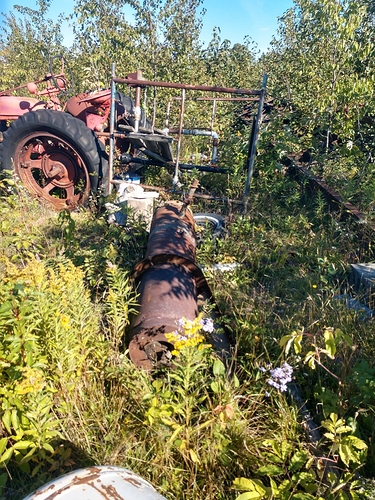 We have been cutting all our wood with solar panels and electric chainsaws.
Now I want to get back in the game. I like the Gary Gilmore/Kalle high Performance charcoal producer. I think it will be small enough to fit on a Farmall H.
This time I am starting from the ground up tho… 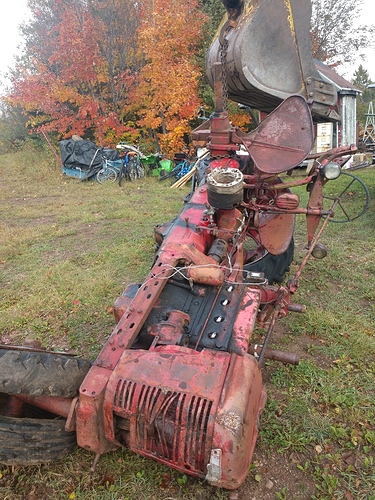 Welcome back to woodgas!!! Holly cow you have a lot of good crap around there. How much of that old junk H are you going to use?? TomC

Hi Tom,
This H has a good mid section. Also it has a hydraulic pump. 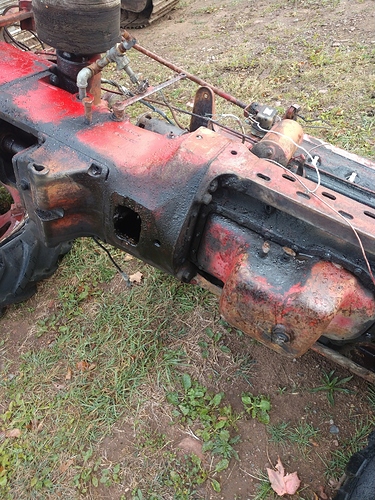 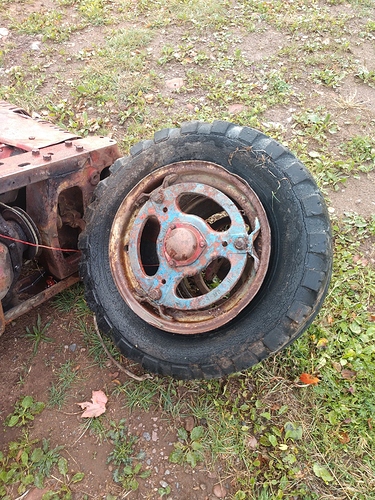 I had a fire in my shop that gutted it. I lost everything, including 2 H’s and a Lincoln 150 Weldnpower. TomC

Hey BruceP.
Let me site help you out here a bit.
Go to the upper tool bar to the stacked paper looking tool and open up categories.
29 long topics under Charcoal Gasification.
GaryG’s, are now much simpler Simple-Fires.
After hundreds of trial trys the most used air nozzle is called a “flute” type by it’s original user. KrisijanL.
Think a short section of pipe with inline holes in it. Those little plastic kids flutes.
At least 4-5 other really actives Charcoal-tiers doing, proving daily use good works there.
Not a charcoal maker, (still a wood-head) user I do not want to name, names and leave anyone out.
You are an inveterate reader. You’ll figure out who know their stuff versus the wild swingers.

Tom,
I am horrified. I am truly sorry. For some reason, I thought your fire had just caused minor smoke damage.
What do you want to do about it? I can get parts for you.
I just received new pressure gauges for our fire extinguishers. I have been thinking of our vulnerabity to fire.
Steve, thank you for the tip. I will investigate.
Also, I have to agree with you after 10 years operating a Honda eu3000i, it’s the go-to generator for off-grid. As much as one can ever be truly off-grid, buying liquid electricity. The Honda always has been the reliable one. The only exception is the times we run it out of gas. Then it plugs that lil filter going into the carb.

Hi, wow. Sorry Tom to hear of your fire. My main 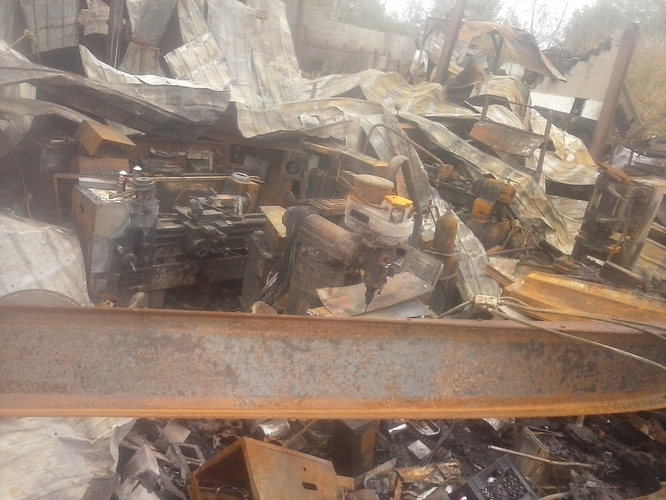 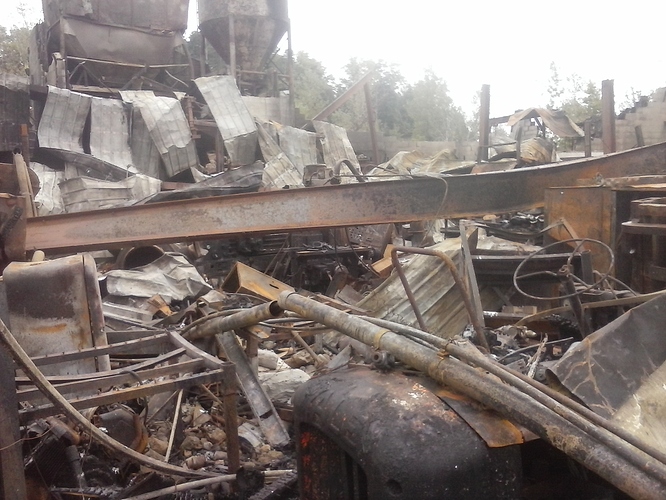 Mine burned four and a half years ago. Looked a lot like that. I just dug a big hole and buried most of it. Figured it would be interesting to future archeologists. 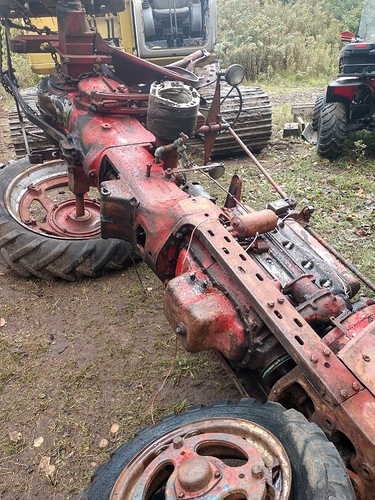 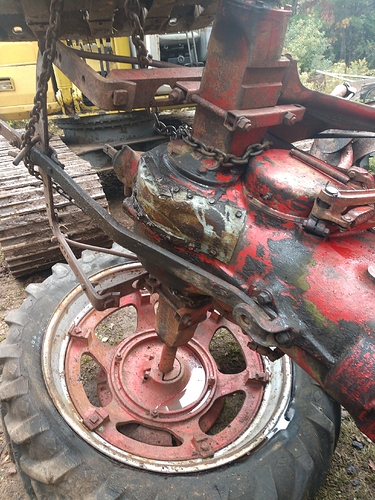 I had a nut come off in my Case differential and went under the bull gear. It cracked that big casting. I tried everything to weld it or braze it. Finally talked to a mechanic at Case, he said that happens alot. As long as it’s just an oil leak, clean it good and put auto bondo over it. Did you say you are going to rebuild that engine. TomC

Tom,
I am rebuilding one engine to start. There are several that need it, but there is a tractor that I want to build. I want it to run on local homemade fuel. I want it to be mobile, like able to haul logs out of the bush. I also want a roof over it like a Rumely, and I want it able to power things like air compressors, or hydraulics.
I have enough stuff to make this happen.
Have you found an alternate space to work? I can’t believe you are really going to camp out on the couch.
I am thinking of hanging the producer on the carb side of the tractor. I realized that the carb should be replaced with a simple governor controlled butterfly valve. All the business that needs maintenance, is on the spark plugs side.

I also have the space where the gas tank used to be. This iteration, I am concerned about real estate. I want the pulley drive, and PTO available. I also don’t want the pathway to get into the seat to be blocked.
So, I am thinking, producer on the carb side, cooling along the bottom frame rails, then up to the filter saddled over the steering shaft, then out to the mixer valve, and down into the oil bath, then over to the intake.
Guess I better round up some pipes and other parts. I think I still have a producer that would work, just needs a mount.

Hi Bruce,
On the farm where I worked an M differential case cracked because a hub bearing went out and dragged one of the balls under the bull. We found two halves of a 1/2 inch ball bearing that had been sheared in half. The crack was about 8 inches long.
The farmer had a really good welder fix it. He drilled a 1/4 inch hole at each end of the crack so that it wouldn’t grow when he put heat on it. Then he used an angle grinder to make a groove right on top of the crack, about 1/8 inch deep. Next he heated the casting right around the crack to boil all the oil out of it. He then used hi-nickle rod to make the weld. Last he ground the area smooth, sprayed it with wd-40, wiped it off with solvent, and sprinkled chalk dust on it. He said if there had been any cracks or pin holes in his weld he would have been able to see them because the wd-40 would seep back out into the chalk.
The tractor held up for the remainder of my time there. I still think he did a really good job.
Rindert

Sharing pictures of our burned out shops!! 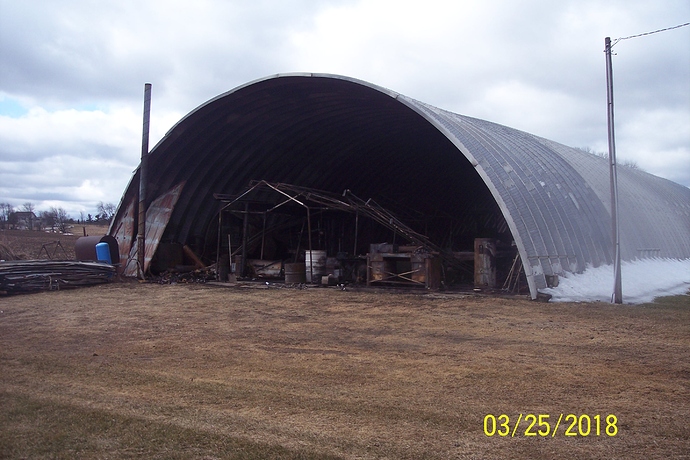 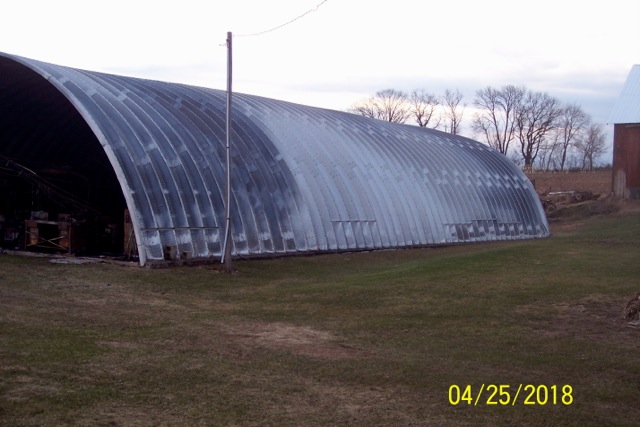 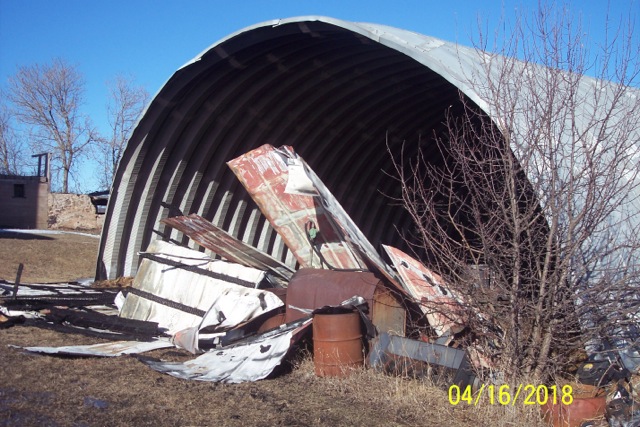 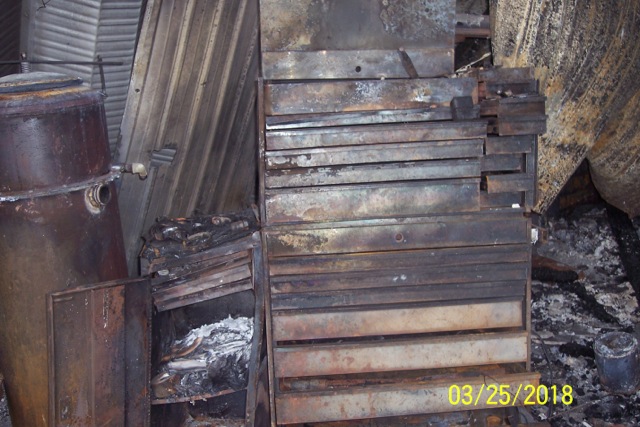 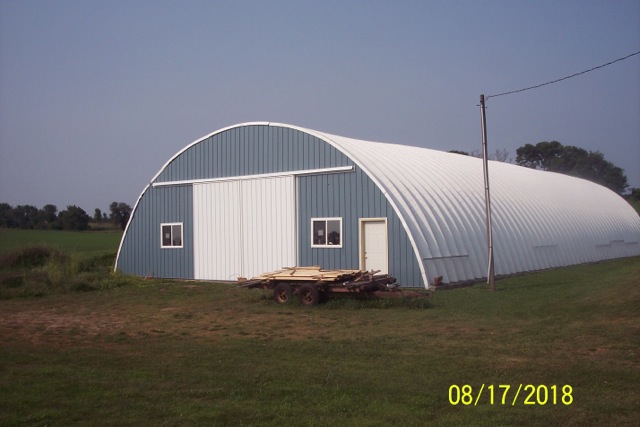 The first couple show how my Quonset building held up to a very hot fire. The one of the tool box was one of my big losses— about $8,000 worth of Snap-on hand tools. The last picture is what it looks like after a couple of retired carpenters that were having trouble making it on Social Security worked it over. TomC 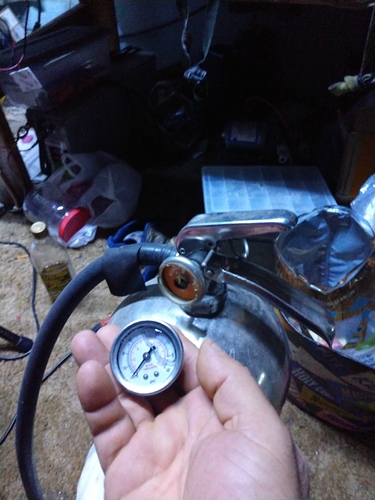 Wow, if I still had such a workshop. 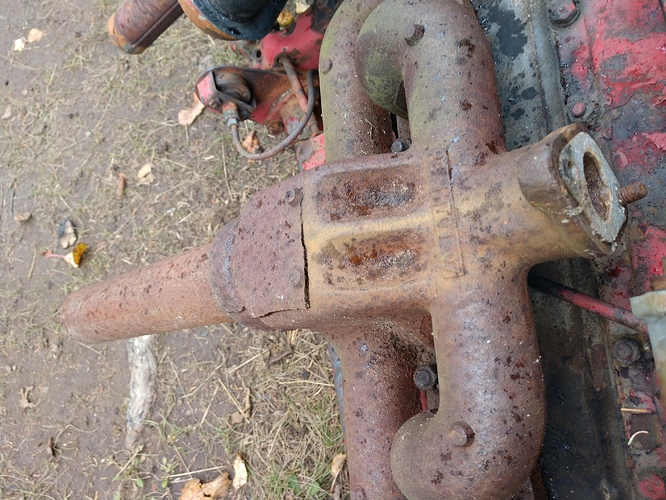 I wonder if that method with the WD-40 and talc(?) would work for welding this manifold?

It will work. But the important thing will be to drill holes at each end of the crack so it doesn’t grow. Use welding rod that is designed for cast iron. Do not try to join cast iron to steel. The expansion rate for steel is different than for cast iron and they will tear away from each other.
Rindert

Sickening. Sorry that you went through that.
I’m on my 2nd 95 cu/yd container for scrap steel from mine. There will be at least two more. I bought an old Drott 40 feller-buncher(short boom excavator) and fitted it with a thumb to pick stuff up and pack it down into the container. I used a burned forklift as a hammer to pack the metal down on the first load.
I’ve been constantly reminded of just how much I lost as I short through the debris and find things I forgot about. One thing I am thankful for that might help someone else. A gent named Nik Kalaj called me a few days after the fire. He owned a company who worked with businesses who had major fires to recover as much as they could from insurance. I was not insured as my insurance company decided to double the amount of insurance they said I had to have. I simply could not afford it. Nik offered one tidbit as he called it. By law 10% of someone’s homes personal property coverage extends anywhere in the world for non-business items. I could claim non business items on my home owner’s personal property!
When I called him, my insurance agent first tried to claim I was not covered - Nick warned me that they might try to say thay so I was ready to refute his statement. The company made me find proof of actual value for everything I could claim. It ended up being around 1/25th of the total loss.

Been there. Reciepts, even if you have them from 10 years ago will have usually faded to be unreadable and after you have lost everything you spent a lifetime accumulating it would be very hard to sit down and try and figure all it out. Sounds like you are still trying to sort some stuff out. I did for about a day and then dug a big hole and buried it. It’s been 4 and a half year since I burned mine. I’m still in mourning.