Here is a fellow I’ve been following on youtube I think you all will enjoy. He can make just about anything from junk he has around and minimal hand tools.
a couple examples:

be sure to check out some of his others as well.

The greatest gift is sharing of ideas.

This is a good simple pump but I am not sure how much lift you can get from it.

If you have the time and patients you can make a much improved pump by using a large stainless nipple and leather pump cup in place of the wood only piston he used.

You know those rubber balls you get from vending machines for kids?
A couple of those can make some good check valves.

In the USA you have those Pensilvania Dutch.
Up in Canada we have a few groups of people called Menonites and Hutterites.
All three groups follow similar cultural rules about rejecting technology, communal living, and the local fabrication and repair of all things…

They make stuff that works for their lifestyle and if you want to learn to about simple living and simple machines they are the folks to watch…
I also want to share what I think is about the most fascinating pump ever made the Humphrey pump.
On a wood gasser would really appreciate how clever it is…
Here is a very good read on the subject.

Here’s a fellow I would like to meet and discuss pumps, etc. They have a whole series of third world accessible technologies all described in very concise videos. The EMAS pump is a brilliant design capable of either high volume or high pressure, the PVC and glass marble construction promises long life. The detailed demonstrations of welding of PVC and fabrication of custom fittings might be useful to people here.

Their other stuff is pretty cool too, some could be refined, but the general message is for people who have very limited resources.

Improvisation is a science l apprecuate most of all. Those guys are great examples (as are most guys from this site too

As for water pumps, my favorite by far is a hydraulic ram pump.
It operates on a principle of when a stream of water flows trugh a pipe with a certain velicity and inertia is suddenly stoped, pressure spike sends about 10% of water 10x the initial height. Google it its worth it!

I have a small spring that provides about 2 gal/min of water. Water is collected, flows trugh 1/2" plastic pipe about 10m downhill (water head about 1.5m) and then to a ram pump. The pump is just a copper pipe with a check valve, a plunger and a polastic botlle to serve as s expansion container. It pumps water to my garden with a height difference of about 15m from the pump at a rate of about 0.3l/min. It sends water above 30 m but at a much slower rate.
Doesent seem much but keep in mind those pumps run day and night on their own and they can accumulate amazeing volumes over time

EMAS also has a video on building a hydraulic ram pump. I also really like the technology, if it can be done on a particular site it’s worthwhile. A scroll pump is another beautiful and simple solution.

I don’t know if any of you ever had to make a cup for a pump. 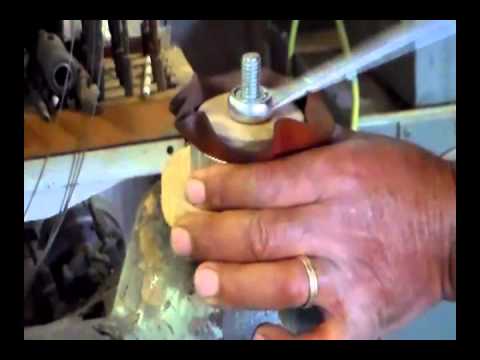 I have and this is very close to what I do with the exception I dip the cup in hot wax before forming to add lubricity,

I really like this thread.
I wish I had space to build a small windmill like that ( for pumping electricity even compressed air… It would not need to do very much except top up these utilities around my home ).

I have a sump pump that is electric…
I dump the water down a sewer and this bothers me because its good water ( used to have a well here and the ground water is both close to surface and good quality ).

If I had a pump like that I might consider pumping it up the hill and storing it for gardening or just outside water use.
But I pump to a sewer and that’s a waste when I consider I use tap water for my lawn in the summer months.

Thanks for sharing this. I will probably be making these this coming summer.

Y’all should read up on the various designs from Feltenberger, Bruce Feltenberger -- Pendulum Pump
David Gengerly has some really cool stuff, http://gingerybooks.com/

I think I must be missing something. That pump doesn’t look much different then spinning up a flywheel to me. The pendulum seems to function in much the same way. Looks to me like they just have a different version of the connecting rod on a wheel hidden in the box but pretty much like the same basic idea of storing energy in a flywheel. If I had to guess I would say at the bottom of the stroke on the handle the pump is not moving water so it is easier to get started.

This guy needs to get on Steve U’s Christmas list. Maybe Steve will give him one of his proven generators

Funny thing, in recent comments he said somebody had offered him a shop full of tools, but he only asked for a couple good files and some other hand tool. I guess he likes the challenge.

ts he said somebody had offered him a shop full of tools, but he only asked for a couple good files and some other hand tool.

Andy, are ya sure he didn’t say fools and not tools ?

Wow! I hope I never have to make one, but it’s nice to know there’s a way to make a wooden chain with just hand tools. Just watching him make dowels through pushing sticks through a steel nut was worth the watch.

I subscribed to his YT channel a while back, well worth it. He is a native New-Zealander, a christian missionary in Columbia. He does puppet shows to entertain children and even adults. Most of his productions are in Spanish to suit the local audience. His style is to make everything he can from scratch, mostly from re-purposing materials found on the street. He is purposely very low-tech by choice. He is an expert in set design, and the “Blender” open-source animation software, along with his low-tech workshop habits. Very interesting guy.
https://www.youtube.com/user/PhilipStephens007

I believe he said once that his sponsors would no longer sponsor him to be there, but they decided to stay and be poor with the people they were serving.