Need a bit of advice, normally I would play around myself but I have a bit of a time crunch. My local town fair is in two days and I was hoping to take a charcoal gasifier to it. Dave Baillie has had his charcoal Ferguson tractor there for two years but it is unavailable this year so I have been plugging away trying to get a basic small charcoal gasifier ready. I flared it tonight and overall it seemed fine but it did backfire out the nozzle about a minute in and kept a flame at the steel flare nozzle after the fan was turned off. I am running unsized, unscreened charcoal which is made from debarked hardwood sawmill chips. My main concern is safety, if that is the worst it will backfire I will just pop a 90 degree elbow on the nozzle stub after I light it. I could possibly spring load my main loading hatch if it is necessary but I am quite strapped for time. Any advice?_

Hi Wyatt ,
I hope I read this correctly and from what I gather you were just flaring the gasifier with a fan sucking through the gasifier and a flare from the blow side , did the blow back from your nozzle happen when you turned the fan off or while the fan was still running ?
If it backfired while the fan was running I would look at a air leak for sure , if on the other hand it blew back after turning the fan off without extinguishing the flare first then I wouldn’t overly worry , just make sure you extinguish the flare first before turning off the fan , as I think its a common event from what I understand .
Dave

Dave I think your advice is spot on, as soon as you said leak I thought there can’t be a leak, the tank is very basic and complete…except for the valve hole that was on the very top, which is now on the very bottom which I was supposed to put a bolt and sealer in before I filled the tank. Ok, that should take care of the fiery burp, how necessary is a spring loaded top? I started to rig it on this one but ran into a snag so opted for bullet proof and easy. Finesse can wait for later.

I agree with Dave. After the fan is turned off there is still a reaction going on that makes some pressure in the system and if there is still a flame at the flare, the gas will slowly burn itself out until the pressure is gone. I have ball valves before my flare fan and on the air intake to the nozzle. I close the flare ball valve before I shut the fan off to keep the flare fire from traveling to the fan and melting the blades. I shut the valve to the nozzle to starve the reaction and keep pressure from building up. One time I forgot to close the valve to the nozzle air and the next morning the gasifier was still warm/hot to the touch!
Put a little pressure on the system and squirt every joint assembly with a soap solution and rub a little silicone over any bubble you see for a quick fix. Backfires usually mean air leaks…

Just plugged the hole that used to hold the air valve for the tank, something I should have done before I filled the tank but no explosion, no foul. Tomorrow I will build the valve system and add either a valve to the nozzle or have a cap to pop on when shutting down. Now if I can just find something to run with it. I was going to run my generator with the poor fuel system but it is making a funny clunking noise when I pull it over.

Hi Wyatt ,
I don’t think its necessary to have a spring loaded top , as it wont do anything anyway as the pressure will almost certainly go out the nozzle anyway , so maybe a bird cage made from fine mesh will help stop any small bits of charcoal flying out .

As for running a engine , is there a chance you could try and size the charcoal a bit first ? once you connect a engine to it you will be surprised at how quickly rat holes will appear in odd sized charcoal and stop the engine in its tracks .

What is a rat hole and why does it stop the engine. I cant use proper punctuation until I figure out how to get my keyboard off french.

Forgot to say that I have a Gilmore style grinder more than half made, hoped to take it to the fair as well but I am running out of time. I might try assembling it at the fair if I can get the teeth welded on to the drum. My idea before I got overly busy was to have my double barrel indirect stove with before and after chips, the Gilmore grinder and the small gasifier to show how simple the whole production can be. The stove is done and tested, the gasifier should be usable for demonstration purposes if I can come up with an easily adaptable engine and if I had an hour the grinder might be in a usable state. Too much to do, too little time.

Rat holes is just the easiest path that the gasses take without fully cooling or converting , if the charcoal is too big then it leaves too large a gap between pieces , it should still make burnable gas for a flare but maybe not to good enough to run engines

Ok I guessed the rat hole based on the name but couldn’t figure out why it would bother the engine.

Hey WyattB . . . it is because going back to the basis of motor fuel gasification . . . .
First you introduced tightly a controlled amount of air through the nozzle(s) to partially oxidize a controlled amount of the charcoal fuel. THIS produces Heat, hot carbon dioxide, and even small amounts of hot water vapor. THESE passed too quickly, directly through a “rathole”, “free” passage will NOT fuel an internal combustion engine.
Now make these slowly flow past hot glowing charcoal surfaces and they are reacted into carbon monoxide, hydrogen2, and even trace amounts of made methane. The “heat” energy is then chemically locked up into these gasses which WILL fuel an IC engine.

Hi Wyatt, Glad to see you making such as diligent effort to show charcoal gasification to the public. The others nailed the issue you are having with the backfire. Basically there is oxygen getting into your gasifier to mix with the chargas and sufficient heat to ignite. The air leak you found, The large chunks of charcoal allowed hot gases to reach that area where the air got in and lit it off. BOOM. One reason you want to have smaller pieces of charcoal. As Steve U notes, the hot gases need to bump into and react with the charcoal which doesn’t happen too well when there are big gaps between the charcoal pieces, ie “rat holes”. You can put a screen over the air inlet or you can mount a mirror at a 45 degree angle and place it near the air inlet,. This will allow people to look down at the mirror that shows the beautiful glow inside the nozzle, (that is if you have a straight nozzle and can see the fire) The other day I took one hour to build an adapter for a new generator. Just unbolt the air filter and weld up a T with valve. Here is a picture,
Gary in PA 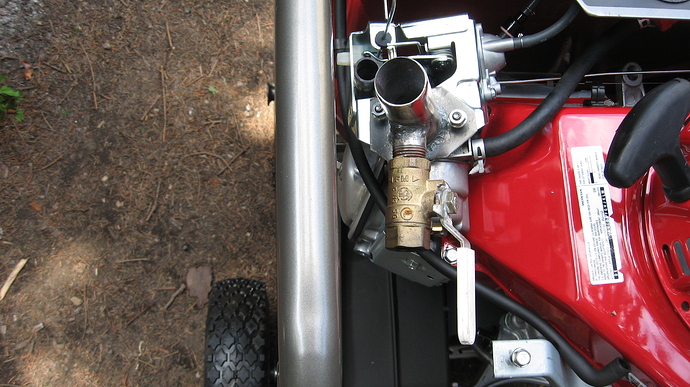 Not enough diligence on my part, I did not participate in the fair this year. Didn’t have sized charcoal an adapted generator or the valving for the air mixture done and couldn’t take the time in the last few days to do what was needed. Still no extra time today and it will be days before I begin to catch up with what should have been done by today. Had some other obligations at the fair so I took the time to walk through, it doesn’t take long, the weather was great and there appeared to be a good turn out. Might try for another fair later in the summer, the biggest one near us is labour day week-end so that should be doable.

I was hoping you would say that.