I would like to show you all a new design w/ great craftsmanship. This video …I’m speechless. VERY NICE DESIGN 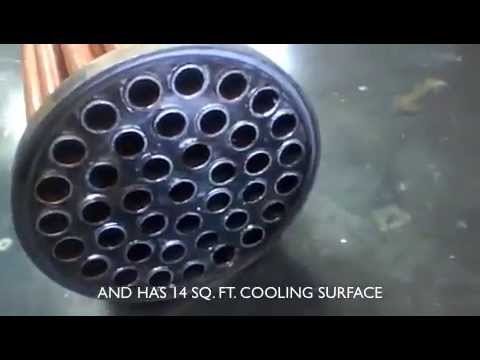 it looks interesting, how do you clean ash out of it? did I miss that? and does it only run on pellets? need to see more before I have an opinion.

The typical pellet stove burns about 1 to 5 #/ hour. I doubt his claims.

Arvid,
I didn’t see a cleanout either. It claims to run for two weeks uninterrupted?? I don’t see how that is possible. I have many questions about this machine but I sure am impressed with the craftsmanship. Looks like a bag of pellets is a cubic ft. or so and I think he said 14 cu ft. hopper?? doesn’t add up to such performance claimed.

well, if it’s 1.5 cubic foot per 40lbs, that would be 374 lbs per hopper. or about 94 Kw… or there abouts using the approximations I build around. I didn’t see a genhead or altenator on that engine… just trying to figure it all out.

I am also interested in these pins (“annular pin grate”)welded in the bottom of the tank…??? If anybody knows (SteveU) fill us in please. Gordon

Hmmm. OK a very fuel specific system alright.
Gordon the “pin” grate is just that - upright metal pins standing up off the floor.
IF . . IF an ash and moisture % spec grade heating wood pellets were used; AND the flow though velocity was always kept up this would ash clear out for removal by the oversize cyclone.
These needs and lack of any upper condnesate fuel chamber removal is why I say a very fuel specific system.
Sigh. If, needs-musts, a fellow substitutes animal bedding pellets without any ash or moisture limiting specs bad hearth slagging occurs. With an command active grate this can be handily dealt with. “Bio-Mass” high silica fuel pellets even worse for mineral heat chunk-slagging ash and moisture’s.
So even if it operates exactly to his claim in my opinion cannot be a broad spread fuel use solution.

Here for power or heat with buy-out costs better using off-road/heating oils versus woodpellets that we see 2x-3x price fluctuate spike every 5 years.
IF a fellow wants to system use lock into pellets then the system must be able to use non-spec pellets to escape dependencies for fuel freedom.

Yes the system workmanship, material choices seem good and reasonable. Note a modular replace out system,
But even clean burning spec pellets . . . no cold system starting up blower??
CHP intended in a cold climate I think the expectation is continuous operations. Kohler rates these engine at ~675 hours life with 50 hour oil changes. I get 3-4X that with synthetic oils changed at oil coloring.
A home heating system here is ~3500 hours a year. I’d rather dink with a blower system and a warming up flare-off then a new engine every heating year.

OK GordonO.
Pin grates shown and described in the Niels Skov and Mark Papworth book “The Pegusas Unit: The Lost Art of Driving Without Gasoline”
Page 103, figure #33 of my 3rd addition copy of this 1974 publication. Two pages there with explanations and figures of different grating types for different ash content fuels of woods, fossil coals and peats.
They also talk of grateless designing - and the cons of this.
S.U.

I have been trying to wrap my mind around how pins would help. I guess having your char fall onto the pins and be ‘suspended’ there they would have more time to convert and eventually turn to ash and be forced out to the oversized cycolone after breaking down.(???) II will look-up the 1974 publication and look at it. I just can’t see not having to cleanout your lower unit eventually. I am getting great conversion with very little left but to seal it up and never have access to it? If it works so good why aren’t people just pitting pins on they’re grates to suspend their char there to breakdown…I may not understand this concept yet. (well I don’t obviously). Thanx for all your research… BTW, My specified fuel is ‘if it’s available to burn…make gas’. NO SOYLENT GREEN!

This is an interesting topic…

id have to see it to believe it.