Anybody into ham radio?

Just recently got my licence, and was curious how many other hams are on here. Somehow it seems like a good fit for woodgassers.

For those who are curious, it’s really simple to get licensed these days - no Morse code needed, just some multiple choice questions. I studied over a weekend and passed the Tech and General exams that Monday.

I got a basic 2 meter setup for about $200. With that I can hit a dozen local repeaters, and talk worldwide via IRLP (internet relay). Eventually I’ll get a long distance HF rig, but those run into money… it’s just a side project for now.

Callsign here is K4DOW. Hope to chat with some of y’all over the airwaves!

I’ve gotten into it a little. Have my tech and general. Haven’t gotten past the $35 baofong yet though. Right now any extra money I have goes into the wood gas Ranger. KD8PQM

I need to look into it Chris, some time ago it was high on my to do list, I just got caught up in too many other things.

Used to be KA0AZA but that’s long gone along with equipment. I had to pass code and theory tests to get my general I think I was driving a 79 ford Fairmont at the time and installed a 2 meter rig in it the next day. Did talk to Brazil on 40 meters once though. Its a lot of fun.
Good for you enjoy it

would love to have more information about it, any good links?

What study materials did you use to prepare for the exam? Post a link to your radio also!

What study materials did you use to prepare for the exam?

I watched this (very long) video:

Dustin, I found this guy’s videos first, which prompted me to look into this whole thing further. Great explanations of basic operations, repeater use, and reasons to get into ham radio. 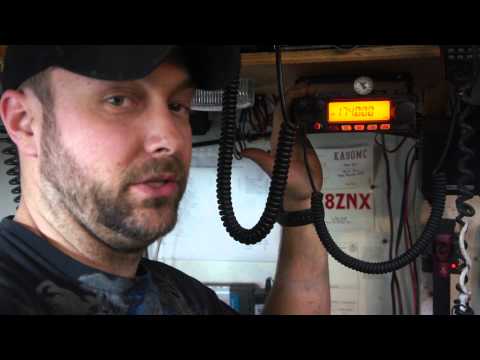 I got the mobile radio he recommended, which works really well; the Yeasu FT-2900R. It pushes out 75 watts on 2 meters (VHF), and listens to all public service / police / fire / ems traffic, as well as weather band. 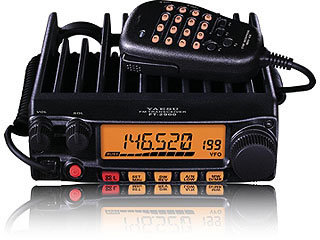 A cheaper option a lot of people like is the Baofeng UV-5R, a handheld that does VHF and UHF. $25 from Amazon: http://www.amazon.com/BaoFeng-UV-5R-Dual-Radio-Black/dp/B007H4VT7A 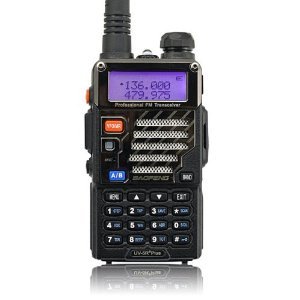 My cousin Don got into the ham radio back in the early 60s and he is still with it. I think I showed you where he was raised while we were out feeding cattle . .

Hello Chris, WX5D here. I got my first ticket in 1961 or 1962 when I was in the USCG (under the Treasury Dept.) on an Ocean going Tugboat WATA202. The tug had one radio operator and he needed a backup, so he taught me Morse Code. USCGC Comanche (ATA-202, WATA-202, WMEC-202). I then worked my way through all the classes of Amateur Radio Licenses, and eventually got WX5D. My son also got an extra class license, and my wife and daughter got Technician class tickets, after mastering the 5 WPM code. I have worked all bands, from 160 meters through VHF FM. Almost all my HF activities have been with morse code. At one time, we had radios installed in three vehicles, plus the base station with antennae perched on towers, some of which are still standing. Martin P. and his brother recently got licenses and are experimenting with hf NVIS propagation. When not building on his charcoal gasifiers, he is building antennas and portable ground mounts.
Ray Menke in drought-stricken sub-tropical Texas hearing raindrops falling into buckets for the first time since last May.

I am a little interested, and would like to get back to learning morse. I am/was using this guys morse code course http://www.pdarrl.org/K6RAU/ His lessons are composed of twelve audio files that I downloaded, so its easy on our limited internet. This way a guy learns by hearing the code, and not by just seeing it.

Anyway, those were my thoughts when I researched it. I am glad that Chris asked, I have wondered how many of the people here are into Ham as well.

Hi Chris,
I have been working on my Technician and General together, for about 2 months.

Don’t forget Mike L, he’s been into it for years and he likes to talk!!!

I have a license, N9VWW. I haven’t used it much, still current, though. No working equipment at this time, lots in the junk pile!
Mike Reynolds

Hi Chris, I´ve been a radio ham sense the 6O´s my call signs in Venezuela is YV4ANR, but currently only on 2 mts. I always keep my CB radio still and began when I was 12 (I´m 67 now

) I have to renew my license.

BTW @Chris, I assume that a guy needs an antenna in addition to your Yeasu FT-2900R radio? If so, what kind of antenna are you using?

I watched the video “getting started in ham radio” that you put on here, and liked the idea of having access to all those public service channels (fire, EMS, ect.) (and the privilege of listening to it while going down the road. …sometimes a guy can never find a decent am/fm station, and that feature would be an interesting diversion… ) All in all, it didn’t sound like a very bad way to go…

If you are counting, I am KI4KDB, NCS399 and until this September I was NNN0ATT.
The KI4KDB is my Ham license, NCS399 is my National Communications System license and the NNN0ATT was my Navy Marine Corps MARS license… The government disbanded the Navy Marine Corps this past September and disbanded the National Communications System in 2012. We still use the NCS call through another part of the Government.
The KI4KDB is set up with a Micom-3 HF radio with a LDG 200 Tuner. This radio is used for voice.
The NCS399 is using a Kenwood TS480, LDG 200 Tuner, an SCS P4 Dragon. This radio is scanning 24/7 and is set up for digital transmitting
The NNN0ATT radio is a Harris RF3200 and since the government shut the Navy Marine Corp MARS down, this radio is now a spare…
Thanks
Pat

a guy needs an antenna in addition to your Yeasu FT-2900R radio?

I’m using a mag-mount 5/8 wave 2 meter vertical antenna from Hustler. This makes it easy to switch from mobile to indoor operation. And yes going mobile it’s way more interesting to talk on the radio than just listen…

I finally got an HF rig, a Kenwood 820s “hybrid”. Solid state receiver with tube final stage transmitter. Have been listening with a random wire antenna hung in a tree until I can get a real dipole built. 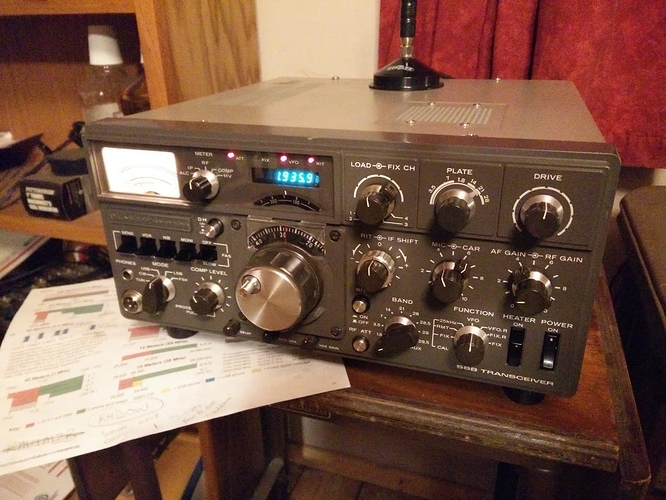 You can see the mag mount stuck on the Kenwood… its there for the Yaesu 2 meter, not for HF.