I was wondering if someone could help me
I have a large stationary gasifier it make good gas that burns out of the breather pipe
I want to run a genset with this
The genset has a 4.3 chev engine that was set up and does run with propane
and now I have 2 carburators on it one on top of the other
the top one runs propane though it and the bottom one it set for natural gas
when I have the biogas go through it and I try to switch from propane to biogas the engine quits
can anyone help me with this project?

Hi Arne
Some photos of your setup will help.
How are you mixing in the air ?
Can you close off the propane slowly as you close the air to get the right air wood gas mix?

You should be able to run the engine very lean on propane, it does not sound good but it should run.
Then introduce the wood gas and wean off the propane but adjust the air as you go!

A video of my stup is on you tube type in tilliehenry and go to the video
as far as mixing the air I thought that the natural gas carb would mix the air correctly maybe not ?
yes I can close off the propane slowly and maybe I need to setup an air mix
thanks
Arne

Just so you know… It would appear there also is a chic with the Youtube name “Tillie Henry” who posts hundreds of videos of herself talking her makeup, her latest hairstyle, clothing crap, or some pop singer. I assumed the one with a still of what looked like a gasifier and only 1 video posted was yours but I had to do some scrolling to find it.

Is it just me or is flaring woodgas in a mostly enclosed area a bad idea? I know it doesn’t take much CO to start making a lot of health problems (somewhere around 1% will make it so blood won’t absorb oxygen, if I remember correctly). Even with a garage door open, it would still hold in a lot of that CO if, say the flare got snuffed out by something.

Nice setup ya got there, did you build it?
The Flare looks good to me.
Looks like ya have the right idea… The Natural Gas Carb won’t have the same air fuel ratio, Some video/stills of the carb and plumbing would very helpful.
Without seeing it, my first impression is that putting an air valve before the carb… might get ya running.
Is the Gasifier working in suction or pressure?

To get the video
Search You-Tube tilliehenry woodgas or 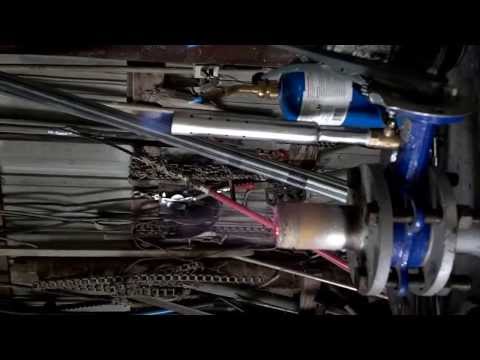 Arne, looks like you really close to getting it running
TerryL

Hey everyone,
Arne, not sure but when I experience the problem your describing it is that I don’t have the air ratio to fuel right or my gas even though it will flare still isn’t quite there to run the motor.
How to say the next thing nice so no one thinks I am chewing butt. However I was hoping by starting a blog about my truck and wood chunker/chipper that it would be a source for me to record my info and get advice from others. Could we try to keep it on that topic…please.
No offence Arne, want to help you if I can.
David S

Moved to it’s own thread. Carry on… Howdy Arne,
That’s one pic, do you have something that shows how you have the Woodgas hooked up?
TerryL

Hi Arne
If you search youtube for " wood gas powered sawmill" you will find my videos and you can see my carb system and air mixing valve. You will need a air fuel ratio of 1:1 depending on the vacuume that your gasifier creates.
Thanks
Patrick

My gas is between 6 -20 in of H2O vacuum . The gas is drawn by the engine not pumped in. If pumped in you will kill the motor , running to rich. Or you will have to pump air in to the motor as well. Be carefully with positive pressure systems, big bangs can happen. Also fit a back fire vent to your inlet manifold or you will blow the inlet manifold clean off the block!
Thanks
Patrick