I have now a huge pile of wood chips that I have several plans for.

First and foremost is to figure out how to dry these chips, if anyone has an easy way of doing this, please let me know.

Past that point looking to design a wood gas device for these chips, looking for advice from the pro;s. That’s quite a pile. I’m no pro but I think as long as you have moisture and a pile, you stand a chance of it turning moldy. What comes to mind is a corn dryer. Not that you need to buy a corn dryer, but if you’re going to be using wood chips, you’ll either need space to spread out and keep dry or some way to keep air to run through it.

Bill’s right - that stuff will be some rich compost in about a year. Better get it spread out to dry. Looks like some really stringy pieces, those will need to be recut or discarded.

You need to sort them first. This approach has several benefits:

I don’t see much green stuff in that pile. That is good. But, unless you have a lot of time on your hands, I doubt that you will be able to “save” much of that pile for wood gasification.

Do you have a goal for the size of chips that you want to save? I am going to take a guess that you are new to this. If I am wrong, sorry for wasting your time, but it is very hard, in my experience, to get long stringy chips to feed without bridging in the reactor. And the small chips clog things up. I shoot for chips that will fall through a 1" X 1" screen, but not through a 1/2" X 1/2" screen. Thicker chips are better. Longer and larger chips are also discarded. I look for chips made from whole trees, not from chipping brush. But that’s just me for my system, which is NOT a WK gasifier.
To get some more of my thoughts on this, go to:
my youtube channel, frenchcreekvalley and look around at the wood chip videos.

Having said all that, I have found that roadside wood chip piles that are less than about 8 to 12 inches thick don’t mold significantly up here in west central Wisconsin for at least a year or two.
Whole tree chip piles are even more mold resistant.

It may be that these wood chips are not a good option at present and will sort out the best wood chips for drying. I may make a roller cage to get the larger chips, and to get the best out of what is there before it molds.

That being said. LOOOK at this video I found ->

After looking at this I thought MAN you could take the standard Keiths design, fill the gap inside the gasifier with wood chips ( where the fins are welded on ) and make charcoal out of wood chips. The charcoal then could be fed into the gasifier.

The principle in this video of taking out the insulation of the standard rocket stove and replacing it with wood chips, then creating holds for that gas to feed back to the rocket fire seems like pure genius to me.

It would take a slight modification, but being able to dry wet wood chips with the standard gasifier filled with dry wood and using the heat of the gasifier to make poor wood into charcoal sure sounds like a winner to me.

Thanks Pete for that info, will check out your channel!

Pete I love this video, lots of good information here.

I found this on ebay, you STOLE that for only a couple hundred dollars invested

I have been eyeing a sorter for worms for my worm bins, I may have a duel purpose for this after seeing your video.

Do any of you recommend a certain chipper for making chips? I see some mention a Chunker?

Some chippers will make decent chips for woodgas. I’m not familiar with all the models, but they’re out there. The feedstock is also important, sawmill waste will make much nicer chips than roadside trimmings.

Chunks will work better than chips in most gasifier designs, so we have built chunker machines to make them. Basically you take limbs or boards and lop off the end with a spiral cutter. This produces egg size to fist size pieces.

As a rule it’s easier to divert the feedstock before it’s chipped and make chunks instead, than to try and deal with the stringy chips, trash, and dirt that these guys produce.

Honestly with a pile like that I’d be spreading it for garden mulch, and not trying to burn it in a gasifier. “Free” wood like this can cost you more in time and effort than just making the right fuel in the first place.

Howdy Mart,
If you have an unlimited supply of that stuff…
You might use one of these 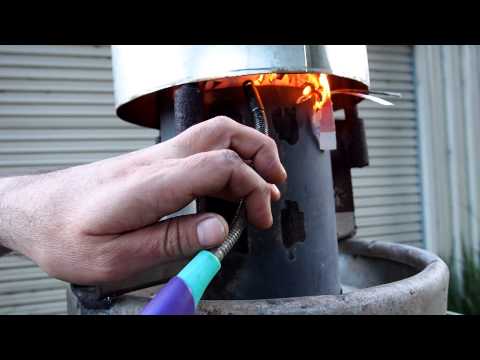 to make heat and use the suitable char in a Charcoal Gasifier to run a small engine and call the rest BioChar.

If ya don’t have a whole bunch of this available… Call it Mulch.
TerryL

Clearly, the WK design desires chunks. But if you are going to use chips:
What chipper?:
The bigger the better. Personally I like chips from a disc chipper of at least 8" log size. And, as the chippers get bigger, that chips do seem to get thicker. The best chips I ever got came from a chipper that could handle trees easily 12" in diameter and it had about a 400 HP engine driving it. And, as Chris said, a lot depends on the feedstock. I think Greg Manning told me once that he would never chip anything smaller than 1" diameter. This idea eliminates a lot of the little twigs that are hard to sort out and the really fine small chips that you don’t want anyway.

Good video Terry. Sure hard to watch all that energy go to waste

I’m not sure where I got the link… Might have been Marvin?
If heat used for space heating or some other process. Would be OK for me…
Are ya ready for -35? Won’t be long now

Me, I’m in denial.
TerryL

I could have driven 10 miles on that wasted heat.

Edit: I know, it’s not wasted, you have good charcoal when it’s finished.

I love opensource as that video shows, and I have built a collection of biochar videos -> 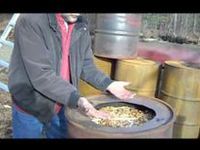 I just got my 9th load yesterday, so yes I have plenty to play with. I am thinking what I should do is char as much as I can with a mixture of dry wood mixed with this wet wood, with a strong air flow. Will do lots of experimenting.

I also plan on doing LOTS of gardening with the mulch. I love wood chips so many options.