A few years ago, I worked with a startup company that went to Finland and bought one of Vesa’s beautiful stainless steel gasifiers. I was told it is identical to the one in his book used to power the Lincoln Mk V with a 400 (see puukaasutinliikenteessa). They removed it from the single axle trailer and mounted on a large flatbed. At one time, they had it connected to a generator but the genset isn’t there anymore. They want to liquidate the equipment- a 30’ gooseneck trailer rated at 30,000# (as I recall) and the gasifier complete with filter and cooler. I’ve asked for pictures and a detailed description of the trailer.

The gasifier has very little time on it. For some reason, one of the other vessels (filter or cooler) had some corrosion issues.

If anyone is interested, let me know. Email: toddt58 (at) gmail.com.

By the way, I work with stainless steel welding and process equipment at work. Vesa’s work was absolutely top notch!

This gasifier, made by Vesa, was imported to the US in 2008. It is located in northeast Louisiana. I hope to get down there soon to take pictures. I don’t have an interest in the unit, just want someone to get it who can appreciate the fine craftsmanship. The company that bought it dissolved and they are liquidating the assets.

Vesa is quite the fabricator and designer. It is a piece of art.

Do they have a price tag on it ?? Thanks, Mike

I asked them what they’d take for it but they didn’t have a dollar amount. I’d say make them an offer. I’ve warned them that the market is pretty small for folks who want a gasifier like this. Very good unit… but how many folks want gasifiers to run a 400 cubic inch Ford? And, with the DOW book, folks can fabricate their own for a relatively small budget. I’ve again asked for photos and details. Will keep you posted.

Thanks Todd, Several of us have been contacted by the History Channel and I have had other contacts as well. I personally could not pretend to build a stainless steel anything. I don’t even like handling the material. They want to “pretend” to have a system built in 2 or 3 days etc etc etc … I personally, if I have the obtainium, can build a gasifier in that time but building a cooler, cyclone, filter, and plumbing it to the engine and mixing valve, etc etc etc puts things a bit further down the line. Vesa has quite openly stated that he does not use his stuff in the winter. It was near zero degrees F here this morning. My truck did not crank on the near new battery for some reason. I coasted down the hill and popped the clutch … Stay warm !!! Mike LaRosa

Ah yes… I was in Wausau, Appleton and Beloit last week. I got out of Wisconsin just in time to beat the real cold. Then again, when I got home folks blamed me for bring frozen temps south with me as we’ve had lows in the 20’s down here in south Arkansas. Mild for y’all but downright cold for us!

My current wish list includes a wire welder and plasma cutter from Eastwood. Someday, my '95 F-150 will run on wood and/or E-100 from cattails in the marsh. For now, I’ll just cruise around in my F-250 diesel running on cooking oil! In the meantime, I’m accumulating some obtanium and studying plans.

Sadly, I know of another gasifier using Vesa’s book as the basis for plans but that project stalled as well. It was designed to be a stationary gasifier, though. It was engineered to power a 100kw generator. That one is stainless steel as well. Sad to see such beautiful equipment gathering dust. It seems that is pretty common when dealing with a project involving investor dollars. That’s why I’ll just quietly do my research as I can afford it.

I get up to WI from time to time (paper mills) and would love to stop by for a visit. If you wish, I can bring you some stainless steel passivating solution, rust remover or “green” degreaser with me for you to play with.

Any more information on this Unit?

Sorry, still waiting on pics and pricing. I haven’t seen this gasifier in almost five years. The project died shortly after that and I don’t know what is left. Sorry I mentioned it now, apparently they aren’t as eager to sell as I thought.

Todd,
Don’t worry. Let us know when you find out something. I am in the market for the trailer as well if it is a deck over type.
David S

Hi Todd (and David), Sorry I missed your last post Todd. I can’t keep up. David and I are about 90 or 100 miles apart. My wife has a brother as well as two sisters that are married to guys in the paper stuff. If you come up this way, please let us know. I think I can handle driving to Beaver Dam for Chinese with the gang. Last time I was there, the gal told me the business had just been sold and it was her last day. I wished her luck as she was moving on. I’d like to see a Vesa thing but he doesn’t drive in the winter so wha’s up with that ??? I don’t either … Mike 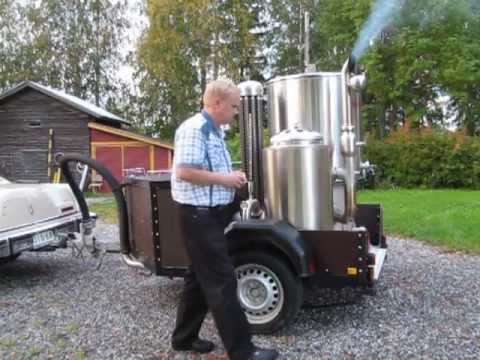 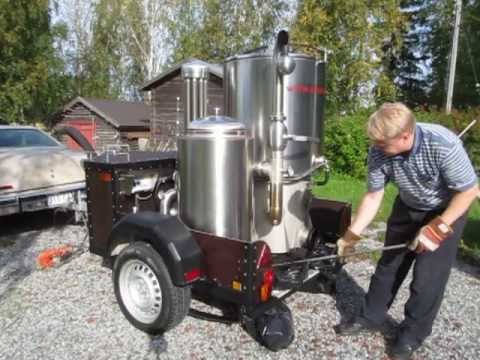 I thought the holes in the trailer platform for plastic bags to be pulled through from the bottom so the cold ashes and char could fall directly into the bags was a neat idea. I’m not sure what is inside the filter that has so many tubes that needed to be blown out with compressed air, but he did get a good amount of ash (every 1000 KM). Says he cleans the char out every 150 Km. Perhaps these links have been posted before, but they were new to me. Ray

Vesa’s fabricating skills are excellent. I work in paper mills throughout North America and am familiar with equipment made in Finland. Vesa’s welds and attention to detail were as good or better than anything I’ve seen anywhere. Thanks for the links. It will be neat to watch them. I was told this is gasifier is identical to his as shown in his book and in the video.

I think the above should have been 1.77 pounds per mile .

The best I have done in the Dakotas is .77 pounds per mile.

I think the car weighs more than the little trucks and the trailer adds some drag. Also he may lose some efficiency by not capturing motor heat.

Thanks Ray and Todd for the videos .

A true master of workmanship and skills .

Yes… I did do that backwards and I see that now. Thanks Wayne!