I’ve been experimenting with adding some LEDs to backlight my vacuum gauges. I think it’s a success! Here’s what I did:

opened up one of my WIKA gauges. Turns out there’s lots of room inside for LEDs.
Added 2 clear LEDs inline with a 400 Ohm resistor. Currently running off of 6v through a wall wart, but the goal is running 12v from the truck. May need a regulator or different resistor.
Lined the inside of the casing with foil tape. This improves the lighting tremendously.
Masked the center of the clear gauge face and spray painted the perimeter black. This to get rid of annoying bright spots from the LEDs. Probably need two coats, I just did one cause I’m impatient.
Bent down the lip of the dial face ever so slightly. This bevel edge makes more light come through to the front.

Here’s the result so far. Quite readable when looking at it directly. Not sure how it will look in a mirror. There’s just not much contrast on that black needle. Good job Chris! The LEDs are great for this type application.

Quick vid showing the gauge test fit in the truck. The camera didn’t do too well in the low light, but here it is anyway. To a human eyeball the gauge seems much better lit. 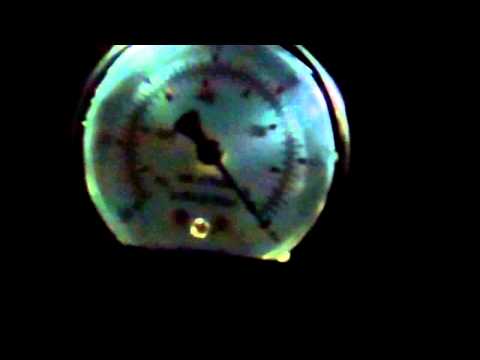 I have been looking for some of the glow in the dark material that the kids use around halloween. I forgot the name of it but you can apply it to a surface and after going from a lighted area to a dark area it will continue to glow for some time.

Each time I pass by some type of hobby or novelty shops that might sell this material it has always been daylight so I never give it a thought. I think I will write me a note on the back of my hand right now.

Very much off topic but years back I had some of the glow in the dark material on the back of my dogs harness . This would allow me to travel pretty fast with no flashlight through the pitch dark following the bloodhound on a fleeing felon situation. No glow could be seen from the front of the hound. Also a lot of practice making no sounds ( stealth ). Lot of the folks that goes over a prison fence didn’t get in there by singing to load in church!

Aaarrrggh! You beat me to it Chris. I felt certain it would work. Here’s the light I was going to try. Sold in strips from China, 12vdc, adhesive backed, and cutable every 2". 3 LED’s and the resistor every 2" with the solder tabs. An 8’ strip makes a great under counter light, fully dimmable with an adjustable “wall wart”. Carl, that’s even better! Please try it. Mine was very hands on (soldering, twisting wires, shrink tubing etc). If you can make the strip work any easier we’ll use that for the standard modification. Actually more LEDs would be nice, and they take hardly any power. Could line the inside of the case with it.

Wayne, likewise I’m curious to see how the glow stuff works out. It will be ideal for the temperature gauges which have no room for LEDs (maybe Carl’s tiny ones).

Also Wayne and Co, you can buy glow in the dark paint at walmart and other places and paint the needle on the gauge ect.

Way to steal my thunder, Henry!! I had ordered a roll to put under my bed rails for the same purpose. Hah. I have one more ace left . . . but you’ll have to wait.

Wayne: I’m not sure the glow-in-the-dark paint trick would work very well. They need LOTS of light input (brighter the better) over a long time period to hold any significant glow. Most are also quite dim after a few minutes so you’d have to turn your interior lights back on to read/charge them anyways. Your night vision would be shot for longer than the charge would last.

Henry: Blue should disrupt one’s natural nightvision, even when dim. Blue light has a higher frequency and so it carries more energy for the same waveform amplitude. Red has a low energy to amplitude ratio so it can be “brighter” but still not damage your nightvision.

Heck, My gauge is way back on the trailer so I just aim a flashlight over my shoulder at it. The trailer does have a battery so I suppose I could just mount and aim the guts of a dead LED flashlight at it with a dropping resistor. It could even run off my freewheeling cooling fan which trickle charges the battery … ML