Its been allmost a month now since l got the new pets. I got BEES and fell in love with them the second l saw the first bee fly out of the hive.
Thod we culd exchange some knowlidge here, since there is so many bee keepers on the site.

So, let me introduce my girls. Those are a voriety called the Krainer grey bee, a indigenous Slovenian bee and the only voriety legaly kept in Slovenia. They have amazing characteristics, look it up if anyone is interasted.
The hive is allso unique 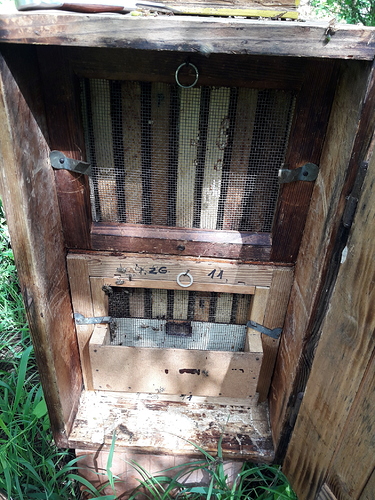 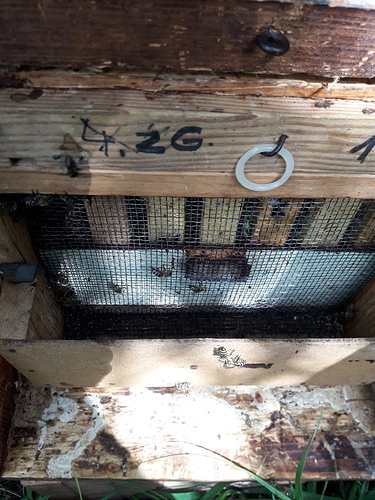 The hives are traditionaly stacked to form one wall of a bee shead, a small house with all the bee equipment. Since the hives have back doors, acess to them is easy and under the roof.
https://www.google.si/search?q=čebelnjak&client=ms-android-samsung&prmd=imvn&source=lnms&tbm=isch&sa=X&ved=0ahUKEwjLrtCC8IvbAhXO_qQKHTFFCU4Q_AUIESgB&biw=360&bih=560
I do however not plan to build a structure like that so the hive will need to be replaced with some other design. Got this old one chdap with the bees. 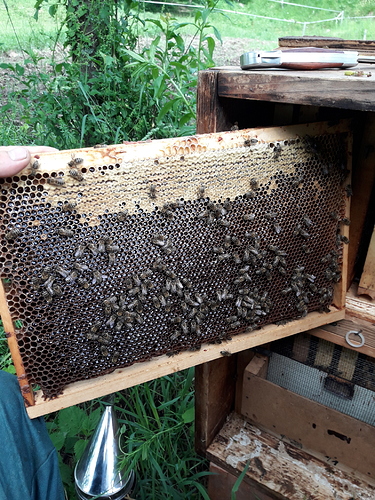 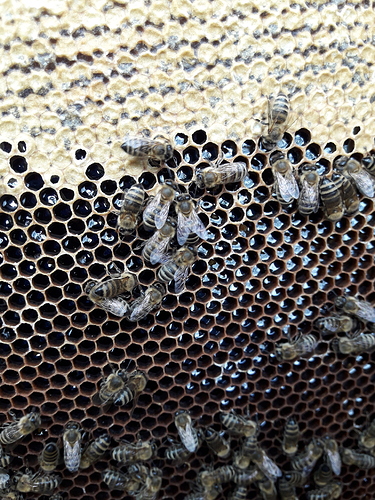 Now l must make it clear honey production is not the primary reason l became a beekeper. Mostly its polination, propolis and above all just the love to the crites. This sayd, l will not be trying to force honey production. I hope to get by with natural ways of beekeeping, so l will only feed them as a last resort. I plan to let them do ther thing on their own and only collect their extra honey. If l get some, great. If not, ok too.

So far so good. I built a polen extractor 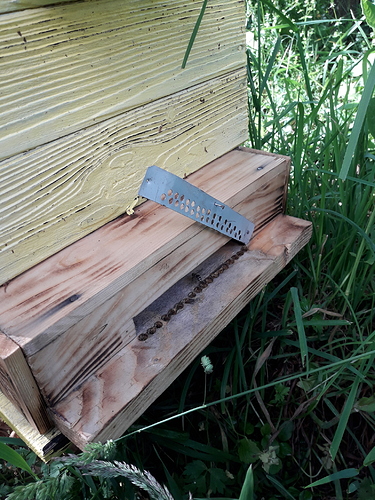 But l decided to not collect any polen for now. Let the bees grow as strong as posible this year, when l am inexperianced and will likely make some mistakes.

Now l allso have a question. The hive is doing great and they are thinkig of swaring. The hive is full of queen cells, one allready has a big larva in so l expect a swarm soon. 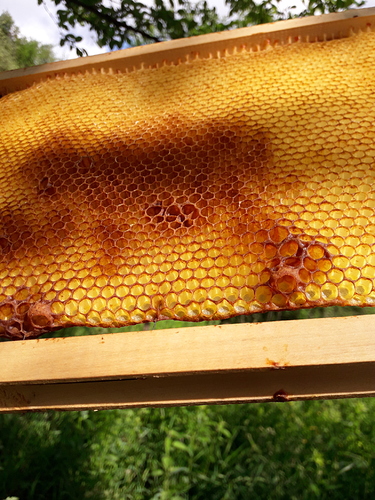 So the question. Let them swarm or divide the hive? Wich do you recomend?

Allso l have a question on queen breeding. Since l only have one hive and the next is at least about 3 miles away, the new queen will most likely be inbreed. Is that a problem?

First, make sure you have a queen in the hive. If there is no queen, the bees will use the queen cell to make a new queen. If the worker bees are not happy with the queen, they will make queen cells and kill the old queen.

If you have a strong queen with lots of brood and eggs then the queen cells may be swarm cells.

If you do not want a second hive, remove the queen cells from the hive and add more frames to give the queen a place to lay eggs and for the workers to store honey.

There definitly is a queen, and a good one. Laying perfect full brood frames, no spoty brood. The hive is rather small and my guess is they are thinking to swarm.

I certainly want a second hive. My end goal is 3 hives, 2 full size and one reserve hive in case any dont make it trugh the winter. But this year l wuld only split them once.

Problem with those hives is althugh wery practical, they are not expandable so now that the hive is geting full, l realy just have 2 options. Divide or take out the honey. I think l will do the first. I did transplant a caped brood frame in the top level and replaced it with a empty frame as the previous owner advised, they hached the top one and built a virgin drone comb from the empty frame. Its now fully filled with caped drone brood. This shuld, as l understand, be cut out for varoa control.

Well make sure you get some honey after all the work your doing you should get a little.
Actually I am not a big honey fan don’t know why just isn’t my favorite thing. But I hear it makes a great alcohol beverage I forget the name. Now that I think about it isn’t that from your neck of the woods?

With the caped drone brood, you have two options.
The first is to open a few cells and look for small dark spots on the drones. They will be easy to see because the drone will be white and the mites will be little dark spots.

If you see the mites (little dark spots) remove the frame and freeze it to kill the drones and mites. If you do not see the dark spots, keep the frame in the hive and let the drones hatch out.

If you are going to make a second hive from a queen cell, you will need the drones to mate with the queen.

Here are some sites you may be interested in; http://www.horizontalhive.com/index.shtml---- http://www.bushfarms.com/beeslazy.htm----- Modified European Long Hive I built my swarm traps as per the horizontal hive site

Haha, our neck of the woods is home to many alcoholic beverages

many contain honey. Not sure wich you are reffering to, but its most likely two of them.one is mead. Wery popular untill about ww2, its made by fermenting a boiled honey solution to produce a low alcohol drink, about 5-10%vol. Not made anywhere nowdays, l never eaven tasted it. I will try to make it thugh.
The second is wery popular still. Honey schnaps. The honey caps are mixed with alpple or pear distilate and filtered (or not). Its a sweet and flavourfull low alcohol spirit (20-35%vol).

Honey is allso a component in Jägermaister, the original authentic one, not the bought crap.

Pat,
I do as you say every week. So far no sign of mites anywhere. I think l will folow your advise and leave the drones alone. Thank you.

Thanks for the links Al!

Edit: the first one doesent open but the second is wery interasting!

Mead is what I was trying to think of. I didn’t realize it is not common any more. I just remember some old timers when I was a kid taking about how good it was.
I really don’t drink but I do like to try some of the odder stuff just to know what it is.

I decided to start building the new hive today since l found a couple of vivable queen cells a week ago. I judged l have about at lest 2 weeks till the first hatches but l was wrong. About midway in the build l heard a strong bzzz round the hive and in a few minutes… 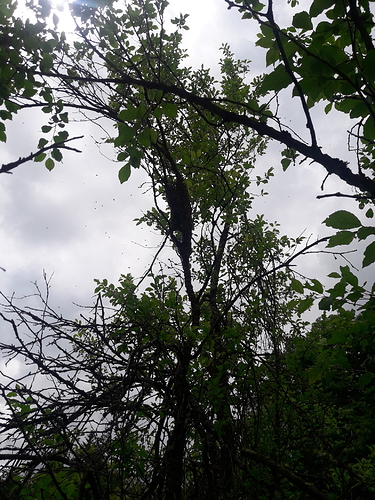 My first swarm! And the devil take me if they culd find a worst place to setle. On top of a young 5" stump dia plumb tree. Catching it was no joke. 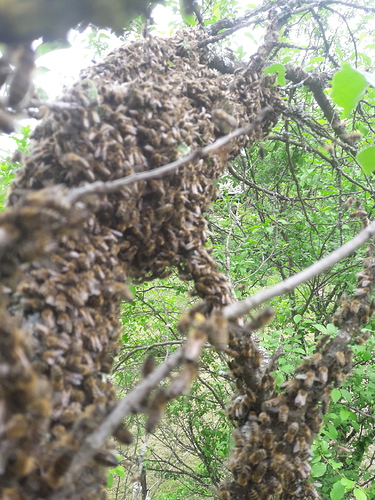 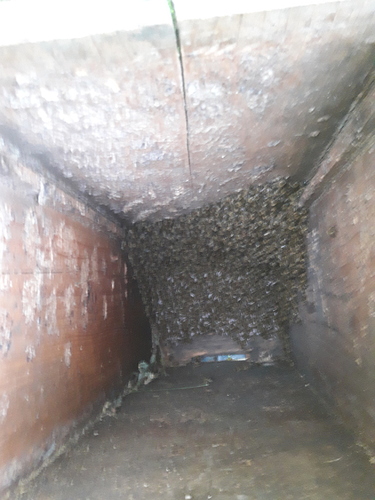 This is the hive l built folowing the inspiration @trikebuilder57 posted in the third link. 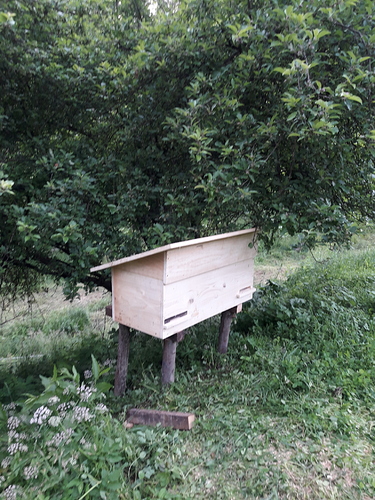 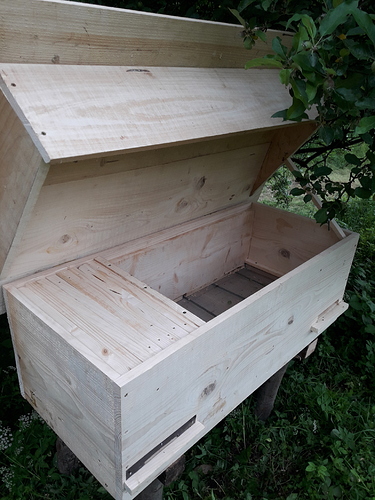 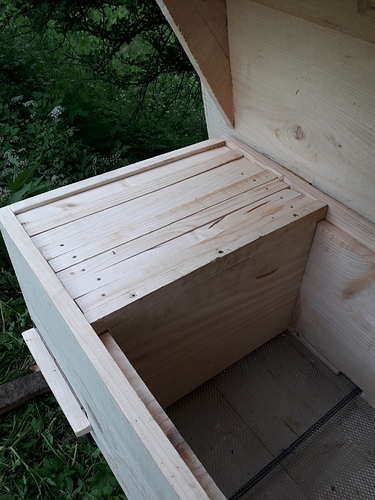 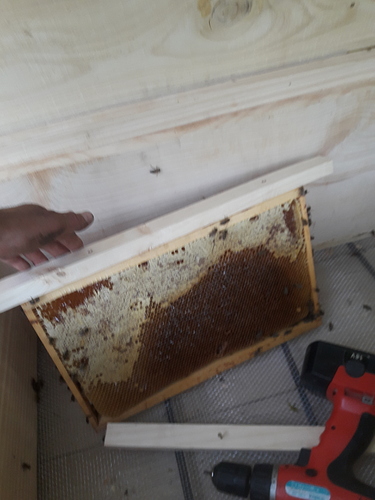 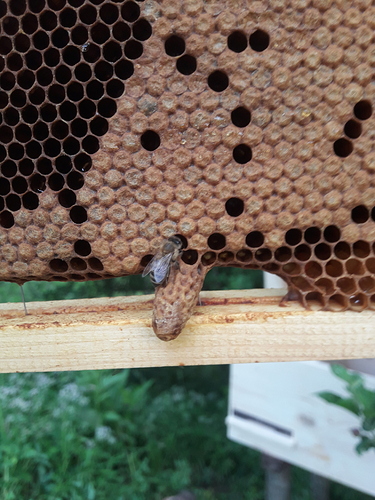 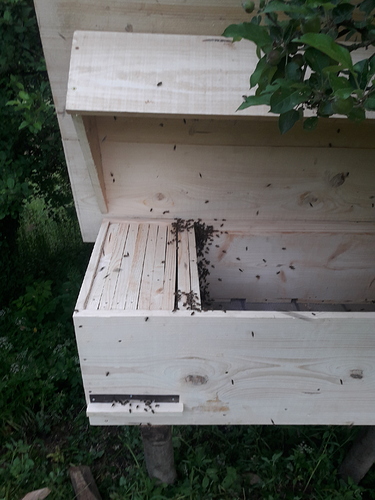 I hope to have done it right. As l type l sit in front of the hive waching the bees signal the companions where the new home is, tired as hell from all the bee fuss but man is bee keeping fun!

Very nice Kristijan.
I’m not lucky enough to have swarms this far north.
I just picked up a nucleus today in hopes of having them thrive through the winter. These are Russian bees that have been raised in Central Minnesota. 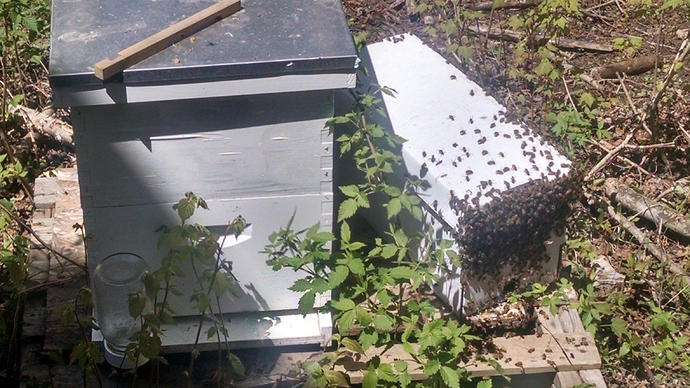 Those Russians are allso darker in colour right?

Got stung at least 20 times climbing on the tree

Thank you. Haha, wuld you belive me if l say the swalnes is barebly noticable. Looks like my body has finaly adapted to the venom.

But l share @SteveUnruh s opinion on alergys and intolerances and how to beet them.

Yes, they seem to be darker than the ones I had last year. 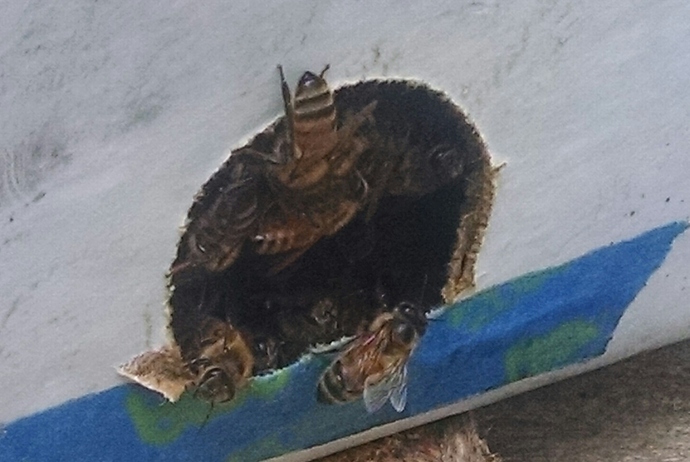 I did my first bigger mistake. I read the queen cells must be cut out of the original hive after swarming so that the hive doesent swarm again and l did this but l found out yesterday that the old queen leaves the hive BEFORE the new hatches! So l ended up with making the old hive queenless. I checked yesterday and luckly there still were eggs at swarming and the bees made them self a couple of emergancy queen cells. Phew. You got to love bees, they fix them selfs the mistakes l mess up.

Meanwhile the new hive is in top shape! The hive is full of eggs and the new comb building progresses good. They started to fill it already with honey. Luckly the swarm hapoend just before lime tree flowered. Its at full bloom now and the two big trees in front of the house sound like a airport 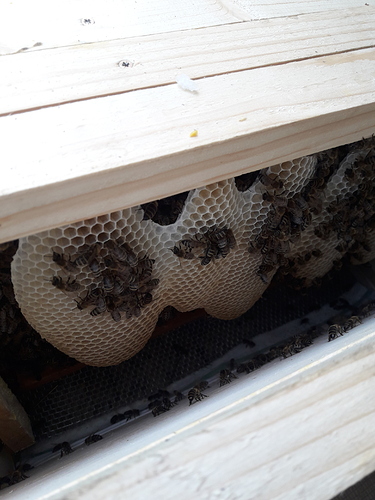 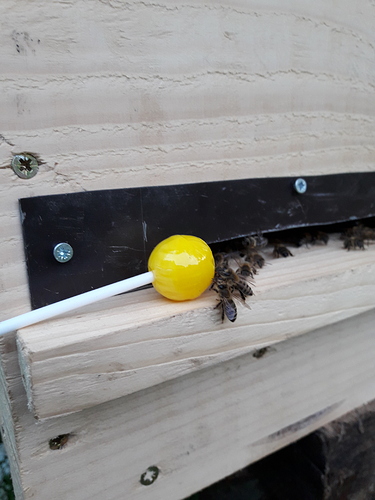 you are entirely justified in taking the time to inculcate these values to your children.

This treatment-free apiary near Bozeman, MT, has Layens hives spread to minimize bee drift for better bee health. “After switching over to Layens hives, I was able to overwinter my bees successfully for the first time in my six years of beekeeping.” – Jeff R., MT. 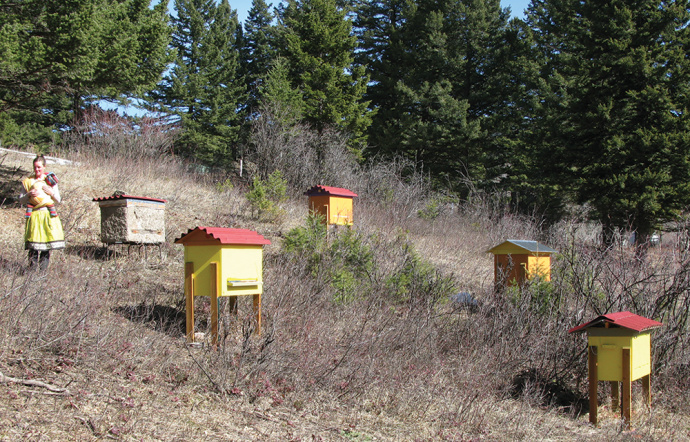 Wow this is the exact same design as mine! I guess my intuition was right when building

we will know for sure next spring.

What is a bee drift?

Kristijan, I don’t know much about bees but here they are, the hives we were talking about.
The electric fences around the hives were added a few years back to protest them from bears. 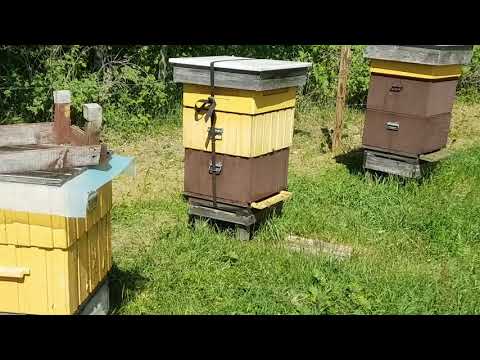