Being smart about things

The 601 trabant.
Proof of concept that you can build something intended to last 35 years.

Now I am frustrated WHY in 2016 can we not improve on the idea of the forever car, but make it clean. 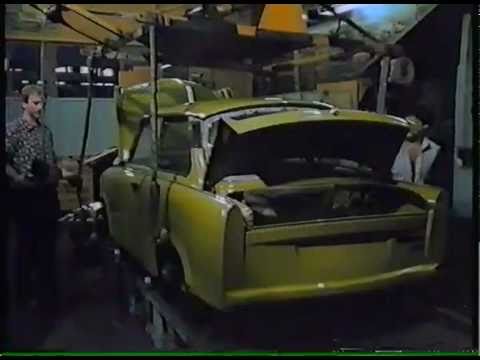 that our society is too rich…

That is certainly one theory, and a popular one, which is often used to explain the “disposable consumerist society.”

The truth of the situation appears to be the emergent reality which results from the complex interplay of multiple factors forming the overall “system” (including the state sponsored education system, money and banking systems, corporatist/regulatory system, etc)/

Appearances can be very deceptive.

For example, is it really true that “our society is too rich?”

I think that depends on what you mean by “our society.” Who are “we?”

The majority of Americans these days have zero or negative net worth. According to a recent survey, most Americans would have difficulty raising $800 cash in an emergency, and have practically no ability to save any money. Are they “too rich?”

This contrasts with the average american in (say) 1907. In those days, most Americans owned their own home, and a good portion of them owned their homes outright. The few who had mortgages typically had them on a 5 year payout, and had at least 40% equity in them. The average American was also able to save 10% or more of their income every month.

In those days, the majority of taxes were raised and spent in local communities (about 4-5% of income), The federal government laid claim to about 2 or 3 percent, and the State governments grabbed another 1-2%. The overall tax burden was less than 10%.

Today, the tax burden at all levels exceeds 50% of GDP. The de jure tax burden exceeds 40% and the stealth taxes of pseudo-money inflation and regulatory monopolization add greatly to this number (although it is difficult to quantify exactly how much).

I could go on.

But it boils down to this.

(1) The guy who has a Model T ford that he owns outright and who has the knowledge, ability, and resources to fix it himself or:

(2) The guy who has a $70,000 Ford pickup dressed up to look like a Tonka truck to live out some juvenile fantasy who owes $65,000 on a 7 year loan and who has to take it to the dealership to have the oil changed?

Nailed it. This is all by design. The ruling class needs to keep the masses under control, and large numbers of people who outright own everything they have are hard to control. The slow move away from actual cash money is just another step in this process.

Well here my take on it anymore.
Becoming the manufacturing goods, and foods making supplier to too much of Europe in WWI then WW2. And WW2 add in refined oil products suppliers DID NOT do us in the US and Canada much stabilization good.
Same thing happen to the Northern manufacturing States in the late 1860’s, 1870’s right after the War Between the States.
Our economies driven up too busy, too change-change, too hot.
Investors, engineers manufacturers did not want the binge parties to be over even after the sudden drying up of Gov’Mint contracts.
So why the drive to over-promoted consumerism; change for the sake of change economics. Have to absorb all of that over productions, growings, makings somehow.
The $'s investors wanted continuing,year after year returns on their investment churning’s.
Engineers wanted to keep their jobs.
Ramped up sales and marketing folks then wanted to keep filling their rice bowls too. They all have kids to cloth, feed, send off to colleges.

There is the option of just keeping the old, existing, still workable.
A 1930’s, 1940’s all metal Kirby vacuum cleaner still works to do the job. Why the almost all plastic “new”, “better” Eureka’s, Sharks, Dyson’s? Buy-in costs on these first two. Newer, sexier, has-to-be-better on the third.

Some products do remain decades usable stable with just minor Tech upgrades.
Light civilian aircraft. My wife’s new production original design KitchenAide stand mixer I forced her to buy two years ago. Our newest Washington State ferry is over 40 years old. WaState ferrys still in use made in the 1950’s.

Automotive, this has been done in the past Mr Wallace. Model T Ford. VW Beetle. Citreon CV2/3 “Duck”. Checker cars. British taxi cabs. Mercedes diesel taxis.
Impossible now to stabilize auto design with the entrenched-in now never stopping Safety and Emissions Standards ed-u-ma-cated, highly-degreed, critters now entrenched in the US, Japan and the EU. So why should they build for decades of use, eh?
These Know-better critters have no stoping points.
Why your lawnmower have no more manual chokes. They consider you too stupid to know to operate them properly. Left on - you pollute!
Why I could not reinstall a 1970’s made heavy plate steel woodstove back into use at a 1996 house remodel. No-o-o-o. Had to pony up over $1,000 (1996) USD for new new WaState/EPA emissions certified model.
Why here in the US we can no longer import and buy really neat new production old style British fuel with ANY combustible oil “Thumper” diesels from India after 2006. Why the even better German/Japanese 1940’s designed simple new production Changfa diesels cannot be brought into the US from China anymore after 2006. Pee-loot-ion they say. Social control says I. These made it possible to go, fuel affordable, Grid-Free.

Just like DavidB., I took out the new bought Plymouth mini van to 19 years. The new bought Ford pickup is 22 years old. The family bought new JD diesel tractor is 36 years old.
That is the way to win at their games.

Yeah. How to do that in salt/rust belt areas?
So maybe the real auto-change Mad should be at the folks forcing salts/corrosives onto all, eh? Bridge-killers, too. See the investor/designer/builder circle-jerking? Then newer sexier bridges needed after the corrosions made failure.
Mirror. Mirror.

Mig welder, bondo, undercoating and implement paint to cover rust seems to be working ok for me to beat the salt. It amazes me how well my jeep performs mechanically. The body is a mess the drive train seems rock solid.

Kyle could not agree more. I like a blog called money mustache guy…
I think I understood car logic from my first Plymouth horizon to my 13 year old liberty… It really is the difference between true freedom and dept slavery…

Hi all, this is how I deal living where salt is used, and lots of moisture. I bought a 1971 Ford f-350 in 1985. I used it as a farm truck for 27 yrs. lots of abuse, but I did reg. maint. on it, and when I changed the oil I would spray it in the doors, hood, inside fenders, and any other places I could. I ran Lucas oil stabilizer in engine, trans, diff., power steer. The truck is still at a friends body still good, I kept engine, and trans for future project. Keep till they die rebuild and run some more. These mortgages that you have to take on new vehicles are ridiculous. Al

Dave it was a fluke I found that old video of car production from the GDR but it proved something I had long heard and suspected.

It was a car designed from the outset to be easy to fix
No garages around back then or warranty you bought it you fix it on the side of the road.

Notice the space frame design with plastic body panels, like a Saturn ( but decades earlier and taken to a much higher body content ).
Those plastic parts are made of fabric scraps that would have been put in landfill here and the chemicals used to make the plastic and the colour were also byproduct from places like the textile industry ( used for dye ).
At the end of its life a Trabi was a disposal problem because plastic body was would never intended to rot or rust or go away in any form.
But we could do one better with modern plastics and fibers that are easily recycled into new products.

Steel is the most recycled material we have perhaps not number one, but considering how much of the stuff we make we sure to manage to recycle it.
But there is a problem with that it very energy intensive to do ( less than liberating the metal from the ore though ).
If we look at the humble trabi it used minimum of this and further if the space frame had of been made of a nickel steel alloy it could have been made corrosion resistant ( but I did not say stainless just add enough to slow rust to a crawl ).
This was never done in the real world but if we built any cars this way we could get year more life from them,
Adding nickel and other alloying agents also can make the steel stronger and them it can be made lighter too!

The engine and the styling are where it falls down.
Dirty 2 stroke and well… ugly…
But that could be fixed with a better engine and since its made of panles you could restyle it more often if you had a sense of taste ( not that grim tasteless front end ).
It only needed 20 hp what kinds of drives could be created to move it along ( small charcoal would be easy, but I am thinking a hybrid free piston engine and electric ).

My VW is rusting away in the drive way, and its clean diesel technology was proven to be a lie.
We can do better.

Found this photo from 1970 its the replacement design for the 601 trabi
Does it look an awful lot like another German car???
The Rabbit introduced two years later…
Amagine a Rabbit built to last. 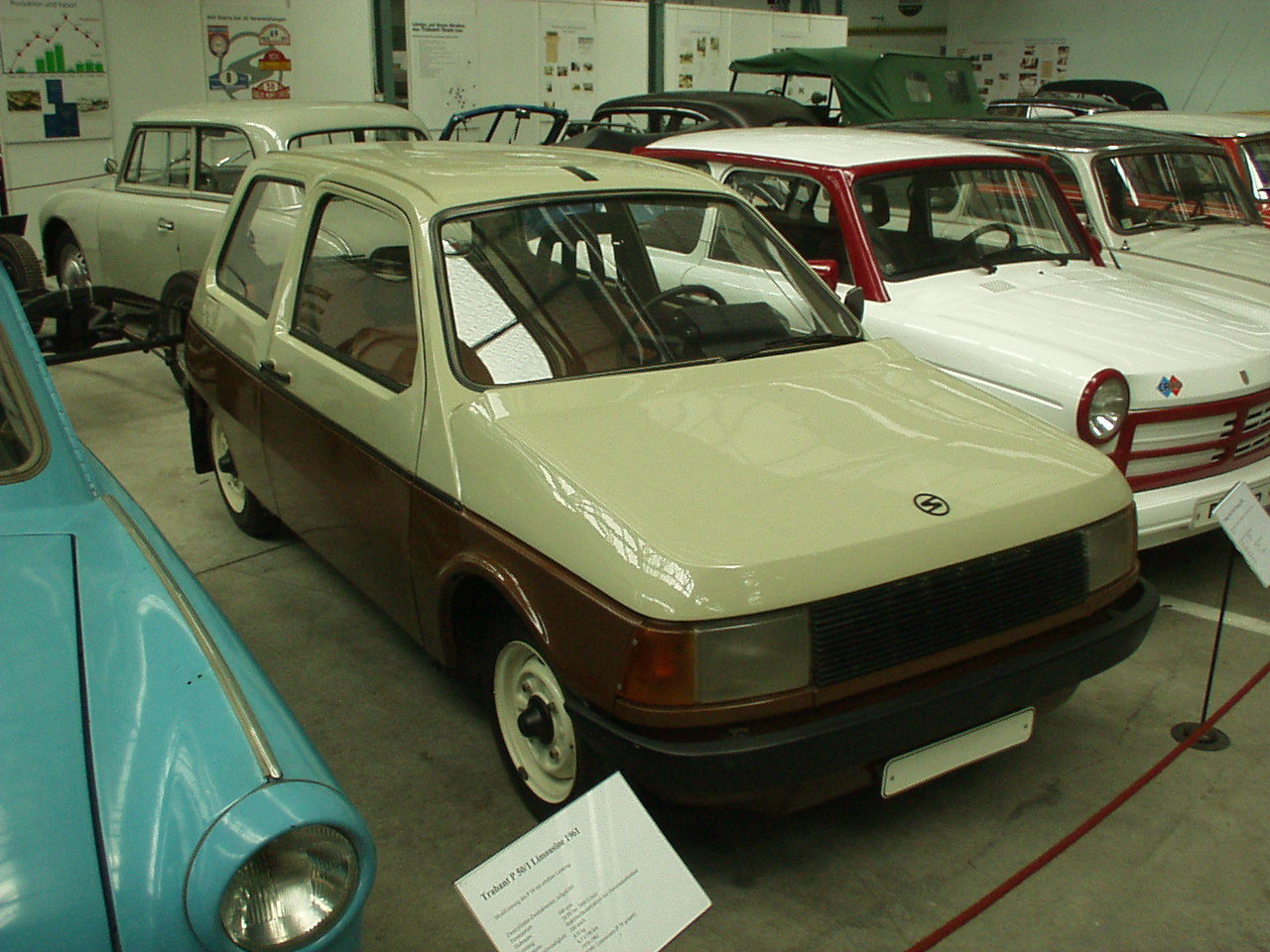