Hi Gang, I have used many types of blowers over the years and have found the “bilge” blower to be probably the most convenient and lowest cost one to use. Only problem is I now have a pile of dead ones. Most of them are Delmar brand. Some of them I sealed all the connections I could get at with RTV and after the last one failed I decided to stop doing this as I only got a few months of starts out of it. The one that went to Argos last year was running fine last week but the trailer is buried in a frozen snow bank. They can handle a pile of soot and of course it may be required to pull one and free it up and hose the bearings down with WD 40 or the such and work by hand… The failures I’m dealing with are electronic. I don’t know if the brushes just corrode off or if the solder connections corrode out … The last one was only on my truck for a few weeks and was even clean when I took it out but is dead as a doornail. Have any of you cracked one apart to see what failed ??? Thanks, Mike LaRosa …

PS, the brand might be DetMar … I need reading glasses now :o) …

I’ve taken only one dead blower apart and the exterior terminals that connects to the brushes were corroded on the interior aspect of the motor. I’ve been searching ebay for a cheap replacement motor that can just be dropped into the old pvc housing/fan. Saves having to purchase an entirely new blower. Cheapest motors I’ve seen are around 4$ with free shipping, better than the $15 for a new blower.
something like this I think would make a good replacement but I have not taken measurements of the old “seahorse” blower yet.

I’m using the same Kirby I started with 4 or 5 years ago. And the same inverter. I love the variations of sucking and blowing you get using bilge blowers. And of course the voltage matches the truck. But the Kirby is really built, and using a few extra valves and and elbows and T’s I can get close to the convenience.

John & Dustin, Kirby motors were designed to run on 120V AC or DC and also have metal housings and are isolated beyond the bearing from the motor so do not pull air into the stream or run woodgas through the sparking brushes. They will run perfect on the “cheap” modified sine wave inverters. They are just tough to find :o) … The boiler draft induction motors that I like to use have a run capacitor and need a pure sine wave inverter. They are expensive. I have used many cheap (free) furnace and hot water heater draft blowers with discarded computer UPS systems on many of my systems. Just dump the dead battery and use heavy wire to direct connect to the battery (with a fusable link of course) … That’s all I had in my 66 chevy or 91 olds …
Dustin, There was no picture of the motor. Could you advise how to dismantle the bilge blower without a saw or a BFH (Big fkn hammer :o) …) ?? Thanks, Mike

Do you have your blower in the gas stream or is it venting ?

Hi Wayne, I am currently using it in the final stream after filtering etc. The first one went several thousand of miles. The second one lasted maybe 100. It was clean when I removed it. The one that is in there now has gone at least 1000 miles and had a few backfires through it. I have a system to prevent them from free-wheeling but they actually don’t so will probably disable that. The first one I had to pull out from time to time and work the fan loose by hand to get it going again and it would be OK for a couple of months. The brushes or connections never went out on that one but the cheap bearings didn’t like soot or woodgas. As soon as we get a thaw, I will pull my trailer out of the frozen bank it is stuck in and play with it. The blower ran fine last week but I need to charge the battery on the trailer that runs both the blower and also the cooler fan. The cooler fan works in reverse like a windmill to top off the charge on the battery when I drive. I remember when your reverse blower went out on the 87 but that saw a pile of tar as well back in the FEMA days. Thank God we all got past that … Mike

with the bilge blowers you should be able to pull off the plastic fan to remove it from the motor. The motor shaft is D shaped and is friction fitted with the plastic fan piece. Makes it easier if the plastic is room temperature to reduce chances of shattering and aids in removal, a little indirect heat from a torch etc also helps, they can be “glued” on there pretty good sometimes. After removal of the plastic fan piece you should be able to locate 2 Philips screws that connect the motor to the PVC outer housing that are only accessible when the fan piece is off. The motor comes right out after those are removed.
The white plastic cover located on the rear of the motor can then be removed and you can then access the armature/shaft/brushes etc.

I tried to rebuild the old motor and was able to get it to work again but It was difficult to solder the brass terminals connecting to the brushes when they were imbedded and held secure in plastic.

Oh, on venting, even if you are just venting for light off, the blowers see the worst quality gas (smoke) and also the first batch of moisture. Might be good to hit the switch from time to time to keep things freed up. I only use one blower so if it quits, I know right away but if you have 3 or 4 in line, I would think it would be tough to tell if all or just a couple are running. I’m trying to think of a cheap way to rig up simple indicators to keep track of what is running or not running under the vehicle without reducing the voltage enough to reduce performance … Just thinking out loud of course. I carry a spare blower and can change it in a few minutes. I think they draw around 6 amps a piece. If they are open circuit they will draw nothing and if they are stuck up will draw too much and maybe fry. This is one for Billy Boes. He has put on the best electrical display I have ever seen (in Kansas). His machine ran perfect. Folks cutting keyways etc etc. That was fun, melting plastic and blowing up halogen bulbs but “we” did pump some stuff back into the grid … Mike

Hi Dustin, The blowers I have are actually 4" but with 3" inlets and outlets so I would have to cut them with a saw to take the blade out as it is bigger than the 3" pipework. I’ll do that for sh_ts and grins tomorrow if the world leaves me alone long enough. I will pry the tabs on the motor and see what killed it … I hope I can just saw straight through without any BS. Thanks for your report and help … Mike

A hack saw and some duct tape will do wonders .

Wayne, Now we are talking the same language. Was 10 below here this morning. Up to 2 above right now … I have a big hole in the thumb of my right mitten. I’m duct taping it now :o) Mike

Dustin & Wayne, I hack sawed the fan end off and pulled the fan. Found the 2 screws and removed the motor. There is a bunch of crap shaking around in the motor. I had to hack saw through the crimps as I couldn’t pry them. Both brush holders were in pieces. There was a little soot on the armature. Not salvagable. Lousy metal. Easy to bend with bare fingers. Regards, Mike

I realize that these units are inexpensive, and people like them, but is there another blower option that might work better for the long haul?
Brit

There’s a $20 bucket mounted shop vac at Lowes, that might be a good alternative. Means using an inverter though.

Hi Brit,
Welcome to the site. I’ve been using this small vac (120 VAC, 7 amps) from Lowe’s ($20 something) for about 6 or 7 hours so I can’t attest to its long time value. So far, so good for my purposes. I like that the incoming air is filtered before it enters the rotor area or motor cooling. I am impressed with the filter, so far. I may remove the rotor assembly and make my own housing to run it on a 12 volt motor at some point. Someone on the site mentioned that Ben from VGW may have tried this. Check the vac out in action here: 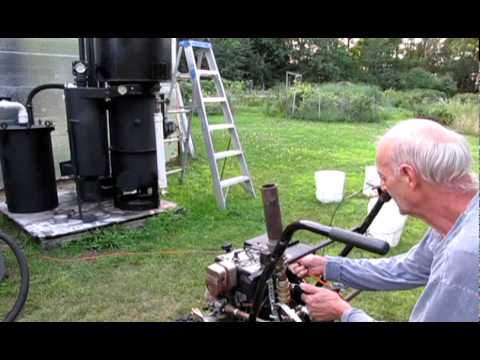 There are a pile of blowers you can get for “free” … It all depends on how you plan to use them … The bilge blower has been one of the easiest things to use but lacking actual bearings and also not designed for the process I have to wonder about them as I have a pile of dead ones … I’m glad I don’t own a boat and expect them to remove explosive gasses from my bilge … I have used blowers from furnaces and water heaters for years. As long as they don’t have a run capacitor they will “probably” run on a modified sine wave inverter or a discarded computer UPS system … I used to modify the blower and add a leather washer / seal in them so the woodgas would just stay in the blower. You will have to study what you get from obtainium land … I’ve been disapointed with bilge blowers but most of the other guys have been happy so far … Lately I start with a 12V Chinese boiler blower that Jim Mason sent me … It got slightly damage playing flareoff in Argos a couple of years ago … It has a plastic impeller in it and I had an airleak so had fire going by it … I usually don’t play the flareoff game but old friends demanded … Good luck, Mike L

BTW, there are some leaf blowers that kick ars for starting … I forget a more recent model with the metal impeller … The impeller was magnesium and I remember shredding mag tires and making flares out of them so be careful …

I used a power vent from one of the water heaters I cut off for a few hours when I first flared my unit. I only ran it a few hours and have nothing to compare it too but they are the closest to being designed for this as anything as far as I can tell. Seemed to work well, but as with the vacuums will require an inverter. But hey who don’t want an inverter in there truck anyway.