Saw this at Lowes today: 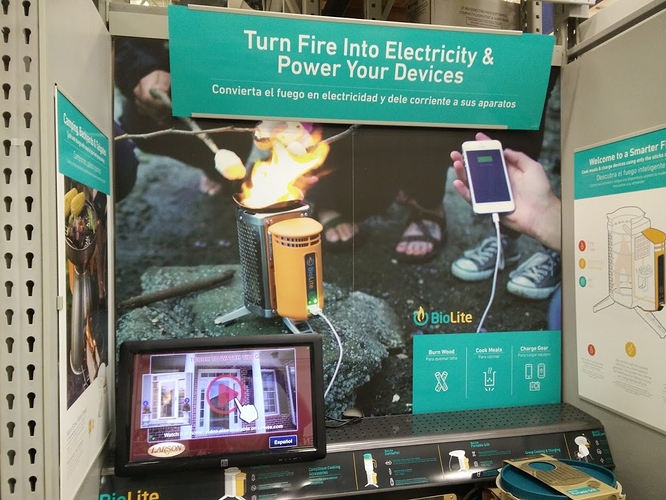 I guess wood power is going mainstream… sorta. Too bad you can only get a few watts to power a smartphone…

A friend of mine has one and loves it. I don’t bring up cost or efficiency I have finally figured out people don’t appreciate that…

I owned one of those for a while. It would be perfect for a motorcycle camping trip because of the small size and the ability to charge phones and tablets. For home use, it is too small and doesn’t hold enough fuel to do any serious cooking, AND worst of all, it doesn’t produce any char. It has an internal battery that gets charged up and runs the blower. When the light turns green, you can plug in something to charge. When you are done cooking, you can pick it up and dump out any coals or ashes, and the blower will continue to run to cool things down. I sold mine on eBay because I have lots of chopped fuel available (meaning I don’t buy pellets) and a dozen other stoves with much more fire power, and each time I use them I make a little more high grade charcoal.

A friend of mine that has the BioLite says it really needs to be kept fired really hot to stay in charging mode. I built my own that I call the BioHeavy that can boil water pretty furiously and stays in charging mode a bit better:

This wood-burning, electricity generating wood cookstove is inspired by the BioLite.  But it isn't lite or light.  So I call it the BioHeavy.  It utilizes three thermoelectric generator modules, two of them borrowed from this project....

Hey Dan good project.
I once was going to TEG bank the back side of my woodstove and use my adjacent wall roof runoff 40F downspout flow to give a better deltaT.
That was back in ~2007. I chicken out on the $$$$$ to makeup a 2.5 kW output on the TEG’s. Wanted to let others put a decade or so on those then just released TEG’s to verify durability and manufacturers/brands shake out. After two years the wife’s plug-in vehicle travel cooler/warmer died.
Keep it up man. And report the, yeah, and nays.
Regards
Steve Unruh