As many of you know I have been rallying for the stepkovac wood processor vs chunkers. I was very impressed with their speed and ease of use.

After much looking I was able to locate a few vendors who sell the units (identical to the one Chris linked in Jim’s thread a short while ago). I was however shocked and appalled at the price they were asking ($6K+) so I decided to build my own. As fate would have it life has intervened, and I no longer have the time to complete it so I have decided to post my research in the hopes that one of our members might run with it and produce a DIY design.

My original research is available via Google docs at the following link;

Stepkovac Urban SM70 / Welmac sa 0Branch Loggers The branch logger&nbsp;is configured with a device that allows for tsingle or double bagging. For easy handling the branch loggeçççççr is equipped with a handle on the çorker(s) and the flat bottom...

The first half of the document contains all of the helpful and relevant info I could find on their design, and the latter half are my thoughts on the construction of one. I hope this will help someone to come up with a working design that we can all benefit from.

Thanks Henry. I have a couple of dozen you tubes of this design. Your description of the blade clearance refreshes that a chain and sprocket drive with tensioner just won’t cut it to keep the blades non interfering. This will be my project after the current WK chunker is done (after the truck) because I can.
I won’t tell coworkers or family about it as I learned that progress questions get to be old hat. Best to pretend that you just watch TV after work and then you’re normal.

The blades will remain non-interfering due to the spacing of the axles in which they are mounted. They need to be fixed shafts with bearing mounts. The design should be such that there is a minimum of 3 mm clearance between the tips of the blades. Shims are then used to maintain blade spacing after repeated sharpenings.

Most of them I have seen (including the Stepkovac branded units) use a drive belt (with a tensioner) to drive a gearbox, which is typically attached to a 3rd spur gear that drives the spur gears on the blade axles. This ensures that slipping will occur on the low torque side of the gearbox.

I think the biggest obstacle is working out the exact dimensions of the knife/axle/gearbox assembly and getting it into .dxf files. That would allow anyone to build one by having the steel work done by almost any job-shop anywhere. The plates, bearings, spur gears and gearbox are the big ticket items.
I think everyone here is more than capable of coupling it to a drive system of their choice (pto, gas engine, electric motor, etc) and constructing a feed chute that works for them (I would prefer a horizontal feed personally).

I did find a company that sells just this piece, It’s $1985.97 (converted from Euro to Dollars) + taxes and import fees, which makes it impractical for just about everyone here;

Ideally, I would like to see a pre-fab parts kit with the components to assemble this for a couple hundred dollars. I think that would make it practical for most of the members here. There is no reason it should cost more than this, it could easily be manufactured for under $100, so a $200-300 price tag should make it more than profitable while keeping it affordable. You are probably going to spend about that to build any of the rear axles or bailer based chunkers currently being discussed on the site anyway.

If a gearbox were included, the price would necessarily increase. I have found suitable gearboxes for a couple hundred bucks on eBay (16:1-ish ratio) but again our members can utilize whatever they have access to for driving, the unit. For most of us I think the base cutting system (as shown in the above link) would be sufficient to build upon.

Thanks for the interest!

Hello friends; It is about 0 F today for a high and a wind chill of -40 F so I am in the house trying to entertain myself. Seeing this thread, I was sure I had seen a drawing for the Stepkovac chunker. So I started hunting through my computer until I found something. ( I am not computer smart, so it was a long process) After I found something that I had down loaded, I took that information and went to Google. Low and behold one of the sites it directed me to was DOW. What a surprise, hidden in the FILES are the drawings for this WOODCHIPPER. Take a look in the Files under WOODCHIPPER. It was posted so long ago I had forgotten about it.TomC

I’m looking, and I don’t even find a ‘FILES’ section.

Brian, it is under FORUMS. I can’t download any pdf’s from it though.

I think it’s a server error, not a file mislocation.

Hey friends; Don is correct. It is a PDF file. Does anyone know how I can convert it to something DOW will accept? It would not let me post it.TomC

It just cost me $30 for this program so I hope you are able to see the files now.TomC Great pics!
Thanks for posting!
TerryL

Those drawings worked for me. Now it’s time to triple save it.

I could mount it on a trailer, run it off a P.T.O. on my truck, and use it as a chipper instead of what I have right now (nothing). I could process motor fuel sized branches first, and then put a tarp down, and process the junk, and then haul the junk to the dump, and load the fuel into a storage bin.

Thanks Marvin. I had seen this but couldn’t find it. It looks like a much simpler design to build.TomC

As for simple to build I like the single shaft ones. My guess is they take a little more power to run from having to slide the wood across the bottom. Not sure how they compare to the double shaft ones. 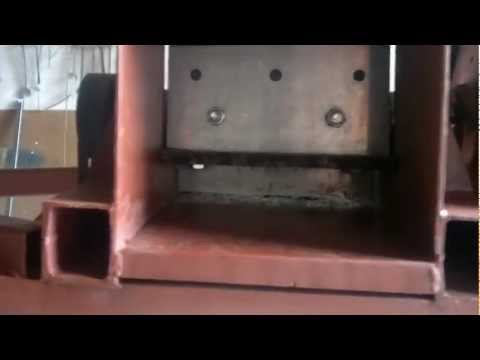 Marvin, did you just let the cat out of the bag about all that steel you got this week?

No Sir. To many projects ahead of this idea.

Marvin you said " I guess is they take a little more power to run from having to slide the wood across the bottom." That made me wonder if a ball bearing roller under the knives would help that?

I like that idea. I have not seen plans for one like this but I think it would be easy to make the bottom adjustable for blade wear.

Your trying to get me side tracked.

Well Marvin, the loader is now mounted on the tractor…