To keep my fans informed…
Two Charcoal gasifiers, build for export to Nigeria So…just wondering here…once they fill that big boy up with charcoal…whats the rest of africa going to use to cook with?..going to be alot of cold chow judging by the size of that

nice work…whats it being used to run?

Hey Koen, I burned the shoelaces off my shoes while welding and cutting. It makes me nervous to see you doing that in flip flops,

They want to run a 2.0 Liter engine running on it, not sure yet what for, but the rep he also wanted something to show. farmerstyle like ;-)… so i did build them a bigger version…

It also runs great on anthracite, even more cheaper then charcoal…

Don, it all depends where you aim with your torch… i am quite fast now with flip flops when a hot drop falls on my foot. i had a few times drops and glowing parts in my working shoes… no way you have time to rescue your skin with shoes…

Thanks for the post and the pictures . Looking good!

My daily driver is a 8,000 pound 8L vehicle so I have to grin just a little when you call the 2L big engines

Hi Koen
This large gasifier he will also be used with the small coal (1 / 16-1 / 2)?
The cyclone appears in iron, it is because the gas will come out too hot?
Thierry.

Thierry, no , the cyclone is from blue pvc 4"

Koen.
Do you want to control the reactor temperature with CO2 and steam?
A tank coal this height (+/- 1.6 meter) produces a significant pressure loss.
Can we know distance between the gas manifold and air l`injecteur in the reactor?

Hi Thierry,
This big unit go’s to Nigeria
I can control, but this unit is not equipped with the Co2 and steam
The actual distance between the nozzle tip and outlet manifold is 100 cm

Decided to do some testing with the big one…
Big smile on my face…
Video and pictures, unmodified diesel engine 2,5 liters 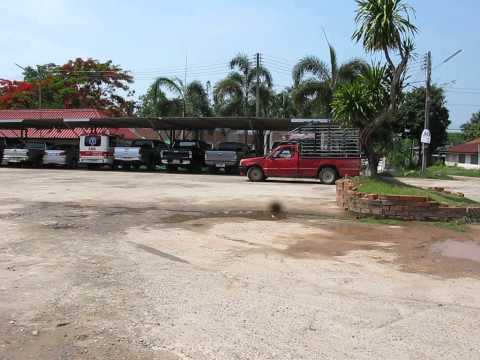 OMG Now that is impressive. Do you have the diesel pump set on idle to ignite the CO gas?. Why do you have the small gasifier sitting in the back? Just hauling it someplace? I am impresses. TomC

Hi Koen
The gas supply pipe going to the motor seems small section?
Yet the engine does not seem limited.
The gas must be very rich?

Hi Tom, Thierry,
Yes, bringing the 2 sets to my village from my workshop…
The engine diesel pump is choked down but adjustable, timing unchanged ( noticeable)
The gasifier is “nozzled” with a 3/4"
Rpm engine kept low for not stretching my luck…
Pipe forwards is 30mm ND so just within limits for the show…

Don’t have to deal with engine computers when converting a diesel. Well, the newest diesels have computers so it would depend.

Aliens in Thailand under investigation… Hi Koen
The compression of the diesel engine of your truck is how much?
I read that you should not exceed 17/1 compression with the gas that wood!
Thierry

That is why i tend to use Turbo engines, without the Turbo, they start with lowest CR

Your can hear the sound of this Pickup that it was on the “edge” but still ok.
The block had nearly a million Km on it, but still alive, i didn’t bother the compression testing, i just lowered the injection level and played a little with the timing untill the “knock” was acceptable… i still think the compression was low anyway…

Koen
do you want to trigger the ignition of wood gas by injecting Ethanol?
I do not understand how this is possible!
Maybe you want to feed on the Etanol, your engine? If needed?
And remplasser injectors by candles
Thierry
Faux ?

Correct Thierry, replacing the diesel injectors by spark plugs.
Another injector system for ethanol fuel or gasoline for additional boost if needed.
Maybe experimenting for startup on propane/CNG and then switch to woodgas when gasifier is good to run…
Have just finnished experimenting with cng injection system on dual fuel diesel engine.
Project from Oil company… It works as a charm, but expensive computing for now.

Very impressive Koen.
You grow so fast that I think you are at least 12 to work!
Looking for another motor to replace the original one of your truck?
Why not increase the compression of a petrol engine?
This is not simple?