Can Wood gas in run in propane cylinders

I see guys filling up propane. First how long does the gas last in the bottles. I want to know if I fill up a truck propane system with the wood gas,will it run the truck and how well,and does the wood gas store in them long?

Wood Gas is not stored in pressure tanks, it is being made continuously in the gasifier system under a vacuum. If you stop making it you would run out in seconds may be a minute in a gasifier.
No one should ever store wood gas in propane bottles. It is just to dangerous because it is always in a gas state after making it. You can not turn it into liquid like you can do with propane and store the liquid in a propane tank.
Bob

Thank you for your concerns on the safety. Seems some folks are doing it out though some how though.

Is there anyone who is here and fills them with the air pumps. Guys are filling the small green and 20lb tanks and say they run their propane appliances and small propane engines with the wood gas. I’m wondering how long it stays in the bottle or must be used right away and if they have tried it on a truck set up?

The only way it could be put into a tank is if you had zero oxygen inside it.

I think one person on YouTube had tried to use a 100lb tank and they managed to get down their driveway before it ran out of woodgas. You don’t get a lot even if you had a safe way of putting it into the tank. It doesn’t compress and liquiefy like propane and LPG does.

I use propane tanks to build the gasifier itself. After I’ve taken the valve off and filled it with water to remove any leftover propane fumes.

The only safe method to store woodgas is in a Gasometer. Even then you don’t get a whole lot.

Really the best way to store your fuel is in the wood form. Once you build a gasifier and learn that units ins and outs you can have it running in no time.

Wood gases are mixed to air at a 1 to 1 ratio for combustion in the cylinders. So take a tank of compress air and use it to run your engine on gasoline. You will be out of air in seconds on high RPMs. maybe a minute or two on idle. This is unless you use a really big tank the size of car. This would be a safe way to do it. It takes a lot of air to run IC engine.
Also wood gas burn rate is slower and you lose about 25 to 30 % horsepower vs. Propane or gasoline.
Now I have seen in old World War 2 pictures of wood gas stored in big gas bags on top of cars and buses. No thank you. I do not want to go up in flames over my head. But they did it back then. These days you would go to jail in any country if you tried that one. Lol.
Bob

Never pressurize this gas above 10 psi it will blow up from Hydrogen imperilment. You can not store this gas under high presure. This is a Warning!! It will kill you!!

This is why they used gasometers when this gas ran the world. Just make it on demand for a vehicle its far easier. The energy you use to pressurize this gas you would be off using it to power the vehicle in the first place.

These guys have warned of the dangers Samuel so you are aware, but there are quite a few videos on the subject on you-tube under wood gas storage. 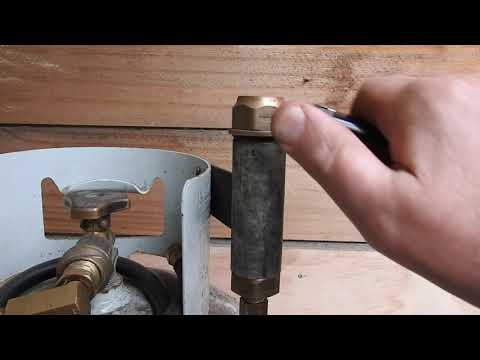 Yes Bob; That bag on the roof would be about as dangerous as having a 30 gal. container under your car, with 20 gal. of gasoline. TomC

Look fellows just approach this from an energy-stored standpoint.
Samual you mentioned 20 pound propane tanks. Someone else said 100 pound propane tanks.
That is ~20 pounds and ~100 pounds of been dense cross-chain-linked-locked LIQUIDFIED hydrogen and carbons fuel molecules.
Take those same thin walled canisters and stuff them full of simple hydrogen, and a simple carbons-oxygen molecules, only wanting to be in a gaseous state.
Even risk dangerously pressurizing these thin walled canisters to 135 PSI. This the common shop/home compressor set points.

How much will the canisters increase in weight then woodgas fuel pressure filled?
Less than 1/2 pound.
You ain’t driving far on that. As Matt said not worth the energy expended to do the compressing.
Steve Unruh

I chat with that guy a lot on YouTube on his channel and on mine. Really nice guy

And this makes the rounds again…LOL.

I see guys filling up propane. First how long…

Woodgas or syngas is a low energy density fuel, and doesn’t compress to liquid untill you get it to something like 3000 psi. Not exactly sure about that number, but I’m sure it is very high.
People in industry have been working on converting syngas to liquid for a long time. Search: gas to liquid, will give you lots of scientific papers. Here are two systems that seem to be working.
Rindert

CPC is also in the process of developing a modular gas-to-liquid Fischer Tropsch product called the LiquiMax®. The LiquiMax® will enable producer gas or flare gas to be converted into liquid product such as wax, diesel or jet fuel.

DME (dimethyl ether) is a powerful, enabling molecule that can range from being ultra-low carbon to carbon-negative. It can significantly reduce the carbon footprint of the transportation sector and beyond 1) as an energy-dense, cost-effective means to move renewable hydrogen, 2) as a blending agent for propane, and 3) as a diesel replacement.

Woodgas contains hydrogen and carbon monoxide along with other gasses. Hydrogen is a very small molecule and thus able to leak through prosity in storage vessels, welds and hoses where other gasses would not. Hydrogen and carbon monoxide do not have an odor to them so it is possible to have dangerous leaks that would not be readily apparent. They are low energy fuels. The cost for compression vs energy return is poor.
The mixture range that hydrogen will burn is wide. A compressor is capable of compressing the gas to auto-ignition point. It would be easy to have an air leak - or low fuel event in the gasifier that would lead to introduction of air (oxygen) in the woodgas. This gas mixture could detonate from compression in the compressor. This would lead to the entire contents of the storage vessel igniting with resulting explosion.
Gasifiers are built with safety valves, blast panels and other methods of safely venting the fairly common spontaneous ignition events in the gasifiers. Safely venting these events results in what is often jokingly called a sneeze. Because the explosion was safely vented - it is joked about because we can giggle about it. An explosion without a safety vent would not be a laughable matter. They are so common that I’ve heard one at nearly every one of our woodgas events at Argos.
A compressed volume of gas would likely contain so much ignitable gas as to lead to a deadly explosion should it ignite…
A decade or so ago a friend of mine was experimenting with making woodgas using wood pellets. I think the gasifier was made using an old 20lb propane cylinder. The gasifier was not connected to an engine. He was just flaring the gas right at the gasifier. He was feeding air to the process using an aircompressor. The gasifier exploded. It launched itself skyward. As he said - it took a while to come down - long enough to wonder where to run. It landed on his shop roof where the damage to the roof steel is still visible today. He posted a photo of the gasifier lying on the roof on the old Yahoo group. He still talks of how lucky they were that no one got hurt.

No Ron no!
Please research the autoignition temperature of both H2 and CO2. Why do you think diesels running Woodgas need a pilot fuel to ignite the mixture? You absolutely will NOT reach the autoignition temperature of either gas with an air compressor. Even a scuba compressor won’t do it because of the interstage cooling.
As far as the flamability limits…the rich end for both is 74% gas 26% air. Any richer and you don’t burn. Just think for a moment about what you are saying. Do you think you would actually be still making gas if you had a hole on the suction piping between the producer and compressor that allowed %26 air in? You said it, it’s a low energy density gas…to make a dangerous explosion, you will need a lot of gas/air mixture. What compressor are you suggesting will supply enough mixture to be dangerous?
Ok Sports fans, I cannot stand to leave false information standing around as fact just because people want to tell scary stories.
Ron, and woodgassers, the reason you don’t want to compress wood gas is because, as you point out Ron, it is too expensive. It takes too much energy to compress enough of it to be useful, unless…you use wood gas energy to compress the woodgas. If you use the same wood gas to run a spark ignition engine to power the compressor, you will never leave the flamability limits. As long as the engine runs, the gas has no air or excess CO2.
Anyhow, I realize this is a sacred cow but the reason you would even consider compressing Woodgas would be if you had no batteries to start your fans. I first used compressed gas to start engines which started producers. Then I found a simple chimney in the hopper lid would start the producer. Combine this with a hand crank on the tractor, and I was good with out a battery.
Now I have Li-ion.
Still, I may have circle back because there is a lot of extra solar power to compress gas with.

Hi Bruce, I surely welcome your thoughts and opinions. What I was thinking was the possibility of tar building up in a compressor - reducing interior volume/increasing compression and sticking valves to the point of possible ignition of components in the tar and gas. Woodgas is able to ignite from compression. I had thought it was around 17:1. I did a quick search and came up with just such a statement from Chris S. Wood gasifier octain - #5 by kmrland Other sources also list that the octane of woodgas is about 104 octane. When I first heard this back a decade ago I thought of the 68 Corvette I have buried in the barn. It’s 327 350hp motor needed gasoline with over 100 octane to keep from knocking.
I would think that someone with a compressor connected to directly draw gas from a gasifier would not have a means of knowing that the mixure was leaned from a low fuel or clogged feed.
The explosion that I mentioned happening that launched a gasifier happened to Wayne Baker. I can send you his contact info off list should you like to talk to him.
Your thoughts?