Just wanted too know if that grounded temp probe conversion held up on full isolation ok,as it would save on temp probe priceing,at least on the grate probes,Thanks for the fix idea.

Hi Kevin, I’m not sure modification you mean, but yes if you isolate the 12vdc power, the display will work with grounded TC’s. That being said, I would still shy away from them for the sake of simplicity.

Please elucidate. I’m thinking grounded means the tc grounds itself through the shell, where the ungrounded has it’s own separate ground wire. Is this right or have I got it backwards.

OK carl i will try too stay away from buying the grounded probes and only buy the ungrounded probes, nice vidio explaining the temp probes,Thanks.

Andy, I am thinking like you that if the screw-in part of the grounded TC or shell as you say is grounded to the gasifier which is then fastened to the truck frame which is negative ground. Then on the digital TC meter there are 4 connections, + and - 12 volt power and + and - TC wires. The - TC wire is then not isolated from the - 12 volt power to the meter causing it not to work. Maybe Carl can straighten us out if this is not correct.

I eliminated any ground problem by buying a very small 12 volt battery and mounted it under the seat. Don’t figure it will need a recharge very oftenTomC

Ok, so the one unit I have so far has two wires coming from the probe. I guess that is an ungrounded one then? Dumb luck is what I call that.

Try putting a continuity meter between the - and the sheath. It could still be grounded at the probe?

Try carls you tube vidio, type in carl zinn and look at the tc read out vidio or the thermocoupler 101 vidio for more info.that explains it also.

Here you go Andy, All our standard use TC’s only have 2 wires and the grounded designation means the TC is connected to the case. They will not work with the cheap digital readouts because they power off of the 12 truck power that has negative connected to the chassie. 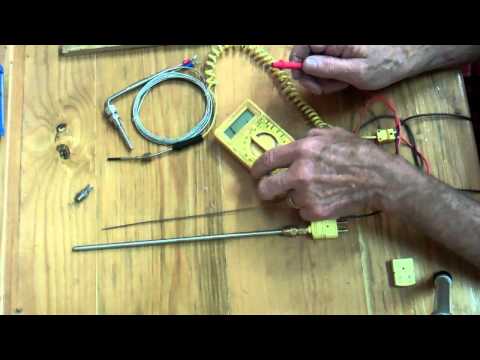 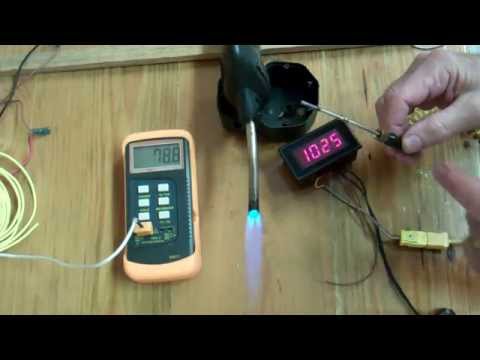 Thank you Carl. very thorough explanation. Happily the one I have is indeed ungrounded.

Just one question remains unanswered. What are the temp ranges of the other types of tc’s? I ask because some gauges I found don’t say what type, but can see the temp range of the face. Mostly like used or old stock items where the seller doesn’t know anything about them.
like these for example. http://www.ebay.com/itm/Vintage-R-602-ISSPRO-USA-Pyrometer-Gauge-pair-/151655321104?hash=item234f5c8e10&vxp=mtr

Not sure about those gauges Andrew. Unless I am wrong, pyrometers and thermocouples are two different animals. I don’t know what kind of probes that pyrometers use.

Hi Andy; those are typically used on diesel engines to monitor exhaust temp… I am pretty sure they use a type K ungrounded T/C

Just remember, these temps must be down graded for poor/cheap construction.

Just an update, I got 2 readouts (i’m only using 2) to run on 1 12v transformer with a splice/split with butt connectors.