I was curious if instead of a drip system to feed water into the charcoal unit one could use a bubbler? I know bubblers have been talked about before in terms of oil bath filtration and that they simply add too much drag to the system, however if you’ve ever made a mock up bubbler full of water and tried sucking through it there is basically no resistance or so it seems. I’m curious if this system would work at all. It’s entirely possible it may add some water but not enough for what we are looking for. Just a thought that crossed my mind and I was wondering if anybody here has possibly tried it and could share their results. I’ll post a picture below which is not mine but perfectly describes what I mean. Ignore the air intake adjustment in the photo, as I said this is not my picture I just found it online. Now for the interesting part. Compare the space taken up by equal amounts of steam and liquid water. Steam occupies 1600 times the space that the same amount liquid water occupies.
So dripping in liquid water is a fantastic deal compared to humid air. We need a lot of oxygen from the air to make the heat to crack water (whether in steam or liquid form. By not displacing the oxygen in the air with water vapor, we can get more heat. More heat means more water can be cracked, and more H2 and CO are made, and the peak internal temp is lowered.

Okay makes sense. So what about in an area like mine where we see 30% at best, would a bubbler then be beneficial? Then after the bubbler install one could work on a drip system as well? I’ve read a lot about people having trouble with there drip systems where they will set it up perfect but they check it part way through a run to find the drips have slowed or increased unwantedly. A bubbler may be an easy way to achieve 100% humidity and then you theoretically wouldn’t need to drip as much water afterwards, after all a bubbler is just a jar or container with two pipes.

The other thing with the bubbler is maybe it would act similar to a water injection system where it cools in the incoming air allowing it to take up less space and therefore more oxygen concentration entering the gasifier?

Sorry for all the replies, but I was also thinking that vaporizing the water before it enters the gasifier may allowed for it to be easier cracked, due to the small and consistent size of the droplets, vs the possibility of larger than wanted droplets entering the gasifier and cooling spots at times and therefore not allowing them to crack?

I feel like a water drip is the most simple way to run the system. Only other way that could work mechanically would be to make a carburetor for the water to make the droplets smaller. The output gas isn’t really hot enough to boil water, I can touch the flex pipe that runs to my filter on my truck’s updraft charcoal unit.
The other advantage of drip is if you have a flute nozzle the excess water will just run out the side and not overcool the reaction.

Hey Cody, I’ve head the carburetor idea brought up before, my only concern with the carburetor is that eventually the water may seize up the needles and components. The reason I was thinking a bubbler is because it’s simple and actually after watching project farm on YouTube testing out a vapor bubbler vs a conventional carburetor he found no difference in fuel economy. Leading me to believe that it must draw in the same amount of fuel (in this case water) as a conventional carb would? I do realize the one downside to a bubbler is the lack of ability to meter or adjust the amount of water going in, which will definitely make a difference depending what kind of humidity levels people have where they live. 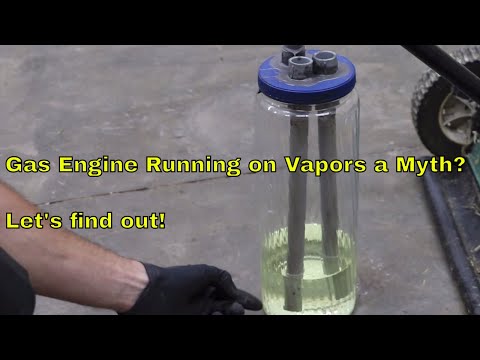 Cody, sorry I just realized a big mistake with the photo I posted that I found. The photo says “intake to engine” but in this scenario it should say “intake to gasifier”, I should’ve looked closer before posting the photo sorry. Aaah, those words scream “lm from the south”

True. But what happens if you have freezing temps for 6months?

Kristijan that’s true where I come from as well! I feel a water system is useful to me in the spring to early fall and then I would have to suffer without it for 6-8 months unfortunately

I guess I would go EGR then if it was that cold.

Or use up some of my old antifreeze taken from changing out coolant.

Also Justin you would have to make your own carburetor instead of using a pre made one. A venturi pickup jet in the reservoir, your tank would have to be wide and short. That’s how I have thought of it at least.

Problem with the EGR is power. Injecting in plain air or air and exhaust will preety much give you the same power. Injecting water in will increase the power up to about 50%. Thats a huge thing to concider

As far as practical application, I believe Matt has it figured out. Just review his threads.

Justin , water does indeed seize up the float valve as the pin is steel in most cases and also the pins that hold the butterfly flaps also seize up if left without movement for any length of time .
If its a problem you could always use a thinned down mix of old motor oil and maybe some Kerosene or diesel and jet the carb down a little , failing that water drips into nozzle pipe flashes into instant steam always worked well for me .
Dave