Has anyone ever thod of adding charcoal to concreete? My thinking iy this. Charcoal is a great heat insulator. Culd one mix charcoal with cement sand fine gravel (just to “glue” the bits together) and pour over a concrete slab for heat and baybee even moisture insulation? Its obviously not gonna have great strengh but l wonder how wuld this perform otherwise…

My late uncle always said any organic material in cement would eventually decompose and leave voids as the cement is porous. Thus weakening it. I think if I wanted to go that direction I would consider cob made from clay instead. Or the aircreate I think @taitgarry00
Has some experience with that product.
I have always wondered how well the walls made with salvaged glass bottles in cement work. The process is cutting two identical bottles and placing then together to form a cylinder sealed at both ends than stacking those as a wall with cement or cob to hold them in place. The theory is that each bottle gives you an air space that is insulation. I always guessed they didn’t work that well but the idea of useful things built from waste seemed interesting to me.

I think for an air space to be insulative, it must be sealed, and it must be small enough that ther can be no convective circulation. For example the less than 1/2" space in a double pane window.
I’m not sure what they add to concrete to make it air entrained, seems I’ve heard it makes small gas bubbles to accomplish it. If the charcoal bits wete very small, and the eventually decayed away, you might end up with the same thing.
Now I’m into guessing territiory, but wouldn’t the cement slurry absorb into the porous charcoal and negate any insulative properties?

Might work down south but up here in Michigan I am afraid the charcoal would absorb water and then freeze the concrete to pieces.

Air entraining admix works great in concrete, it reduces the amount of water needed to make the concrete workable. It requires a drum mixer, and a longer agitation than normal to build up the microscopic air bubbles. You can tell when it makes the foam, the mix will suddenly loosen up. The last product I have used is from BASF, roughly a tablespoon per batch, I like the results. Less water equals stronger concrete.

I mention that as background to partly address the reference to freezing damage. Here the problematic material for freeze popping is oil shale, it is found in gravel from glacial action, and has to be washed out at gravel plants.

I don’t think that charcoal is technically an organic product any more, it’s just pure star material. It will never degrade, except on the surface it will wear out. It might act like shale by serving as a pocket for the absorption of water. The other concern I have is how soft it is. I think it would tend to get ground down in the mixing process unless added as late as possible.

Sounds like some experimenting or internet research is needed.

I believe @jo_olsson had mentioned that in his part of Sweden a layer of charcoal was traditionally used as insulation below floor slabs.

I have looked into aircrete, looks like a fantastic product. Impact resistant, fireproof, high insulation value, densities can be low enough to float on water. Not really available in north America. Very popular in Europe though, apparently half of new house construction in Germany uses it. I think aircrete has pretty good freeze protection/ prevention of crack propagation due to the micro bubbles. Perhaps if charcoal was ground fine enough it would have similar properties?

I have also read of charcoal being used in clay plaster for interior walls, the claim is it has better insulation properties, moisture management and maintains better indoor air quality. Could be.

What Garry sayd on charcoal degrading. There has been charcoal enrichened soil found with charcoal over 5000 yo. I dubt concrete lasts that long.

I can personaly confirm this. On occasions l dug out peaces of charcoal out of the ground that l know must be at least 100yo because the ground wasnt disturbed for generations.

There is only one microorganism capable of breaking down charcoal as l remember but if it doesent degrade fast in the soil l dubt it will in concrete.

Water freezeing and structural stability. My thinking is to use this as a insulation between the slab and actual floor.
The initial concrete mixing water shuld evaporate out leaveing the char mostly dry inside. Or shuld l say equalibrium dry, say 20% moisture.

This is what we usualy build with nowdays here, its what Garry describes. Its some great stuff to work with l can tell you that…

I recommend everyone should make a little bit of aircrete in the kitchen just for a test. You can use a wire wisk to make foam for the test. If you are going to make a lot of aircrete, like for a patio or something, then make a foam machine. https://www.youtube.com/watch?v=aSLJCPR1Prw
Rindert 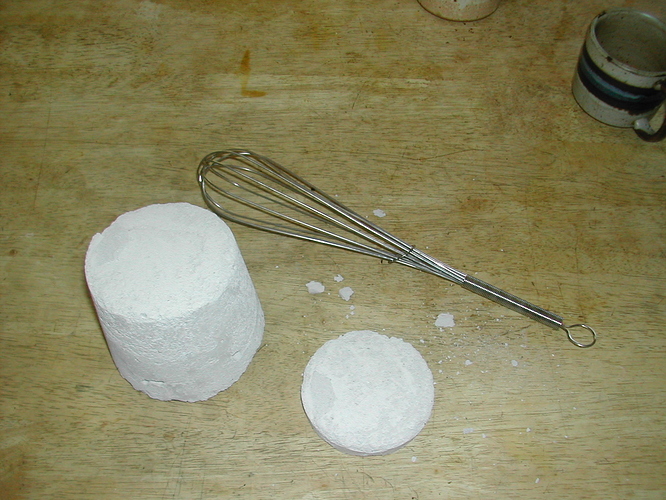 What are you using for the foaming agent?

I hear that even Dawn soap doesn’t really maintain the foam for a proper aircrete. The proper foaming agents can be ordered from Europe, but I suspect for a pretty penny. I suspect the foam marking agent for crop spraying might be up to the job…

I think aircrete would be the ultimate material for insulation for a slab on grade construction. Pour in place over poly, then a minimum slab on top.

And for skirting insulation also, just lay it in a trench around the building footprint.

I used Dawn soap the first time. And then I used Suave shampoo. The shampoo made foam a little faster, but they both worked.
Rindert

We have done the bottle thing. It works for light but I can’t see any help with insulation.

like others have said, charcoal isn’t organic any more, at least for practical distinction. It does not rot, or otherwise get consumed by microorganisms.

Why use cement in the mix at all K. Why not just apply a layer of char between the two layers of flooring. Maybe the cement will help to stick it all together nd make it less messy. 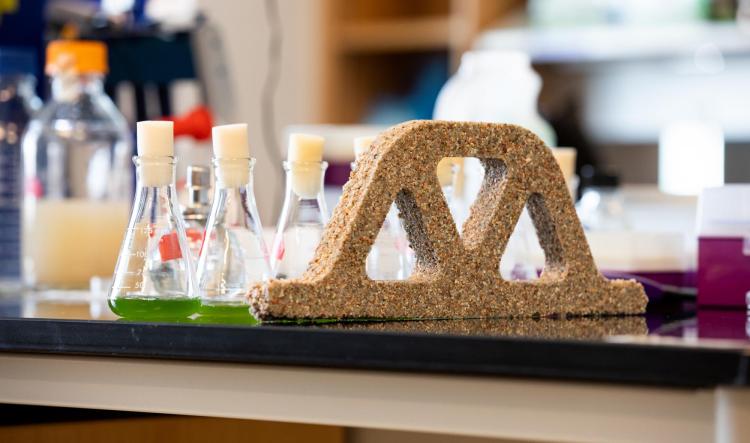 Buildings that can heal their own cracks, absorb toxins from the air or even glow on command? They may not be so far off, a new study suggests.

hi garry said the aircrete chemicals could be got in europe. we have and make aircrete in canada as well any comurical concrete maker has it they add a powder and mix it in the amount they add controls the amount of air in it. but the aircrete is not for insulation it doiesnt seem to matter how much you put in. here in ontario i worked for beamish construction we use to sell a fair amount of it. for garage floors i dont know why ? 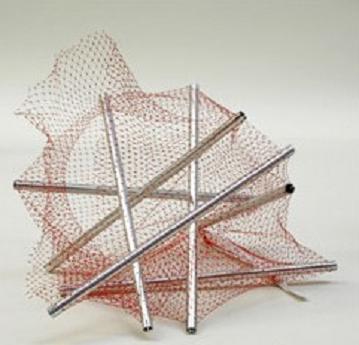 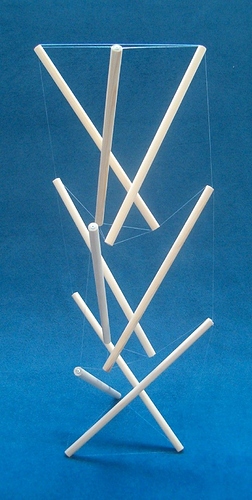 question what is a structure ?

this is what google says:
Structure definition . Within the context of the built environment , the term ’ structure ’ refers to anything that is constructed or built from different interrelated parts with a fixed location on the ground

iI dont know what it is but it looks like abstract art or somthing. I couldnt see somthing built using that. But i am old fashion i guess.

As i have a lot of boiler ashes and char, i just mixed with ciment and some lime into a test brick.
Has to be charcoal concrete, yes,…

Purpose and effect: cooling by evaporation
Goal: industrial cooling of process water for one
And making bricks for a sun facing wall at the other…
as the blocks retain water and evaporate slowly, they are amazingly cool to the touch… about 10ºC cooler then the room temp.
next testing: on the wishlist… ( building a test rig ) 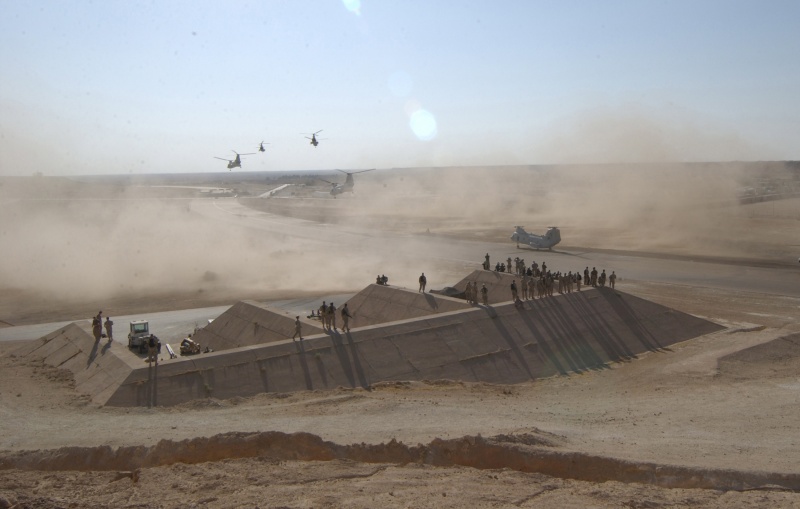 Iran launched the ballistic missile attacks in retaliation for the U.S. killing of Iranian Maj. Gen. Qasem Soleimani in a drone strike in Baghdad. Eleven missiles hit al-Asad air base west of Baghdad, leaving wreckage and deep craters at a facility where more than 1,000 U.S. service members were based along with Iraqi forces. Another missile landed outside the northern city of Irbil but resulted in less damage.

At least one of the missiles at al-Asad struck just yards from a bunker with a service member in it, Maj. Gen. Alex Grynkewich, a senior U.S. commander for the U.S. mission in Iraq and Syria, said Wednesday.

On Jan. 13, U.S. military officials told reporters visiting al-Asad that “dozens” of service members were suffering from concussion-like symptoms. But updates have been vague, with officials declining to answer questions until Friday about whether anyone needed to return to the United States for additional treatment or if anyone had returned to duty.