I whipped up a variation of Gary Gilmore’s keystone stop e here for boiling sap with the waist heat from making charcoal. Maybe someday I’ll wrap a copper coil round stove pipe for a gravity feed preheated. 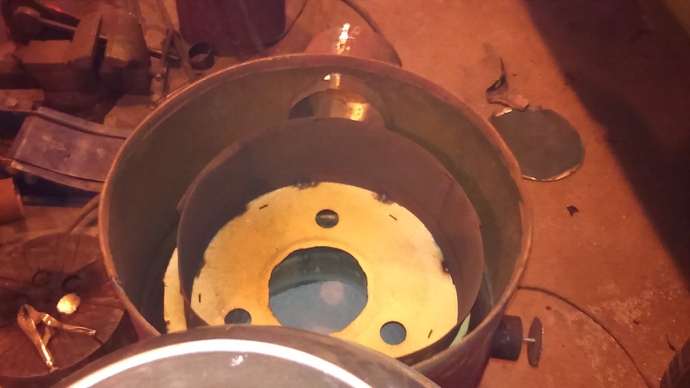 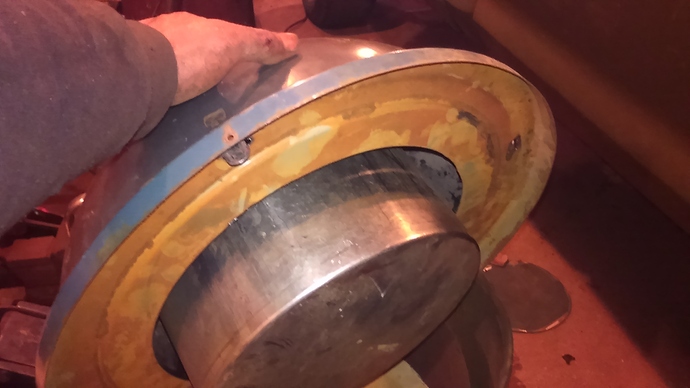 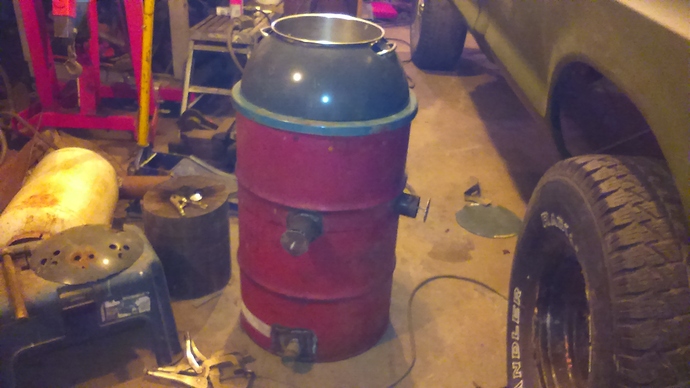 Well I fired this up today to see what it would do. I ran two buckets of wood with very different results.
The first was a bucket was chunks I made from patties last summer, sun dried and stored in an old camper since then. It lit fast and had the water boiling in about 20 minutes from a touch of the match to some birch paper. The wood was reduced to nice char in about an hour and fifteen minutes and boiled off about a gallon and a half of water from fresh out of the well.
The second was from firewood that was split last fall and stored under a tarp on pallets. I split it fine today, most pieces were broken down to about one inch or smaller by about eight inches long to make processing the charcoal easier since I have yet to build a grinder. this was stacked tightly on end in two layers and lit with birch paper as the first was. It took two tries to get it burning and combustion was slow, very slow. It got the water back to boiling quickly but never achived a good hot clean burn with the roar of the first. Although there was much more wood packed in this bucket and the water was already at boiling it was reduced much less and took over twice as long. I may have left it go a little longer than I should have, went in for dinner . I just went out to dump it and at this time I an guessing I yielded les from more wood.
In conclusion I think this will work well but the wood must be very dry. I won’t be able to burn tomorrow but next time I will fill the bucket as I did the second time but will use wood from the shed that has been under cover for over a year. Wood under a tarp does not dry!! the water condenses on the tarp and then drips back on the wood to do it again. I have pulled the tarp back several times over the winter when the weather was dry to help it dry but it just didn’t have the time it needed. This wood was all cut well over a year ago but the pile was just to big and could not breath. It sat in a pile about fifty foot in diameter and up to ten foot or higher in the center. Too much rain and snow and no air. Some of the birch in it was already getting a little punky. None of it was used for making charcoal, but I have been trying to use it up first for shop heating. You want heat you need dry wood.

Interesting topic Jim. I gather that this is a TLUD system? What more have you learned from experimenting?

I was making quite a bit of charcoal last winter with a TLUD, generally performance, yield and quality of charcoal were quite good. The system I was using called for much smaller (shorter) chunks than you describe, that may make a difference. Also, I can confirm TLUD’s are not happy with higher moisture fuel.

Yes Gary this is a TLUD stove. Search up Gary Gilmore’s Keystone stove. That is what this basically is with a modified top. The smaller wood gasifier sized chunks worked better than the thinly split longer strips due to better air flow. The drier the better. Like any charcoal making method I have tried very labor intensive if you want to use the heat. I like playing with the charcoal gasifire’s but I have not found a way to produce the charcoal without wasting the heat that I am willing to put the work in to make any real quantities yet. Keeping it dry in storage is another issue.Lots of work for a little fun.

Keeping it dry in storage is another issue.

Jim LaPlant,
After you screen, sort, and grind the charcoal that comes out of the TLUD, put it in some 55 gallon drums with the locking lids. On those days when the humidity is low, open a barrel and check the bottom of the lid for moisture. If the lid is dry, no problem. If you see condensation on the bottom of the lid, then leave the barrel open during the dry spell, then lock it up again. Eventually, there will be no condensation on the bottom of the lid when you check it. Think of cloud formation. Air containing moisture is lighter than dry air, so it rises. I recently opened a bunch of my 55 gallon drums to check them, and they were all dry.

Hi Jim, good to hear that shorter wood performed better. From my experience, wood sized for gasifier use runs right in a TLUD, probably all the way down to coarse wood chips, smaller ones will run on pellets. So the same setup as for gasifier wood minimizes labour. I agree with Ray, air tight containment is key. I lucked onto using a large air tight flour tin to douse the glowing char, once it’s cool it’s 100% dry at that stage, then putting it in a sealed barrel as Ray describes will keep it that way.

I have never had enough on hand to fill a barrel nor a barrel. Just this fall I did finial come across some open top barrels. A 300 mile ride and I got six, all that fits in a Dakota. I should experiment with some vessels in the woodstove again. They work well but life expectancy is short. I was only using coffee cans and stove pipe though. Maybe I’ll roll up some 14 gauge and give it a try.

It can be amazing how charcoal adds up if firing a TLUD regularly. A coffee can would be pretty fragile, a piece of stove pipe with cap ends will last much longer and hold more.

I used the coffee cans for the end caps. Yes it can add up but labor intensive no matter how it is done. If you know a way it is not I want to know. Ijust bought a commercial wood chipper. I think mixing chips with some gasifire chunks may save some wood processing time but there is still the charcoal processing. I guess it too may be reduced.

Sorry for misreading the mention of stove pipe. 2 pcs of stove pipe could be joined together on the locking edges to increase the volume and size of material charcoaled. A TLUD can be different sizes, up to barrel size, but I like systems where the heat is put to good use, not likely in bulk outdoor systems. I like the wood stove idea, as during the heating season quite a lot of material could be processed.

Hey guys, Now that it is cold outside, my charcoal making has moved indoors. Here are a few pictures of the Keystone stove Jim mentions. It is nice to utilize the heat from the wood and get charcoal too. The fuel canisters are 5 gallon buckets with air slots in the bottom. They are filled with chunks or foot long pieces of wood stacked on end. Either way works. When the yellow flames no longer appear, the stove top is opened, a lid placed on the five gallon bucket and the fuel canister is removed and placed on the floor to cool off. Meanwhile another fuel canister is loaded and ready to burn. The burn time is about an hour and a half, 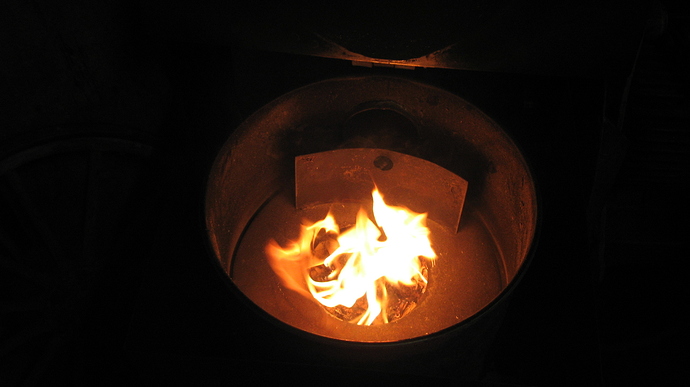 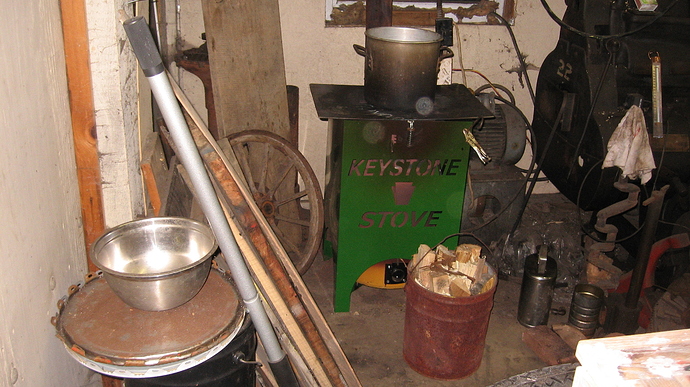 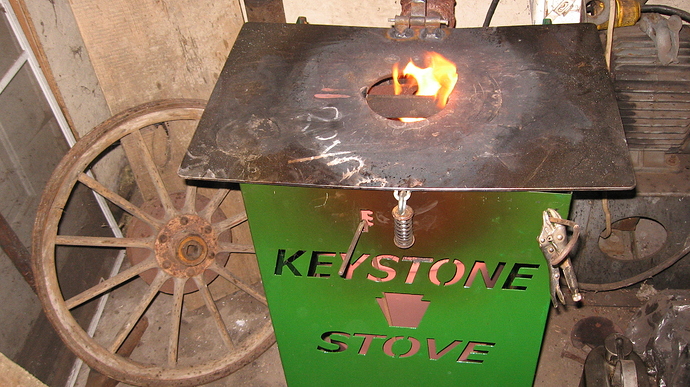 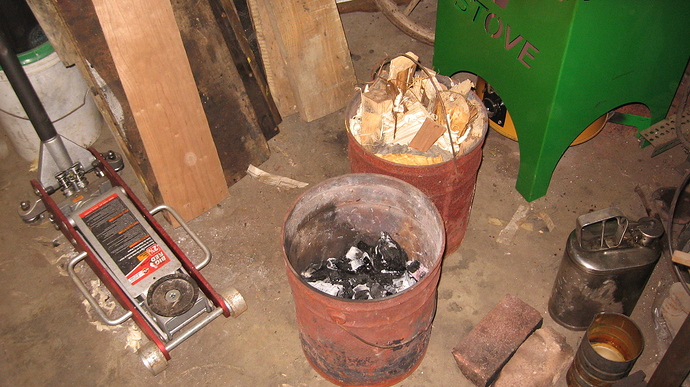 What is your source of sap this time of year?

When we made maple syrup, many years ago, we used to say “it’s the flames that boil the sap, not the coals”. Before we got the incoming air right (by adding grates), we’d have to shovel a lot of charcoal out of the arch (cooker) and toss it outside to make room for more fresh wood.

Hey Pete, Not making syrup yet although it feels like the season here in northern WI. This was an old topic that was brought back up with the interest on the charcoal making.

Air containing moisture is lighter than dry air, so it rises.

Ray, can you explain the science behind this? At first thought I would think anything with moisture in it would be heavier. Think wet rag vs dry rag.

Water vapor (H2O) is composed of one Oxygen atom and two Hydrogen atoms. Hydrogen is the lightest element at 1 atomic unit while Oxygen is 16 atomic units. Thus the water vapor atom has an atomic mass of 1 + 1 + 16 = 18 atomic units. At 18 atomic units, water vapor is lighter than diatomic Oxygen (32 units) and diatomic Nitrogen (28 units). Thus at a constant temperature, the more water vapor that displaces the other gases, the less dense that air will become.

Now I have another problem that I need some help with: Burning one gallon of gasoline which weighs about 6.3 pounds, creates 19.64 pounds of carbon dioxide. A medium growth coniferous (evergreen) tree, planted in an urban setting and allowed to grow for 10 years, sequesters 23.2 lbs of carbon. This estimate assumes the trees are planted when they are approximately 4.5 feet tall (the typical size of tree purchased in a 15-gallon container). Once again, we need to convert this estimate to pounds of CO2 removed from the atmosphere.
(23.2 lbs C) x (44 units CO2 / 12 units C) = 85.1 pounds of CO2
A medium growth evergreen tree, planted in an urban setting and allowed to grow for 10 years, absorbs approximately 85 pounds of carbon dioxide.
Then according to a table at the bottom of this page, http://www.science20.com/science_motherhood/i_wanna_go_green…_so_show_me_math-2490
running 4 bags of charcoal through a charcoal grill would produce 44 pounds of CO2.
So does that mean that putting 8 bags of charcoal into your Geo charcoal gasifier would produce about at much CO2 as burning 1 gallon of gasoline?
If all the heat generated when making charcoal was used for heating our house, and the CO2 was ignored…then??? Still thinking on this one…