We all know that charcoal gasifiers like their fuel on the small side, makes for a good self insulation and allows the gas to cool down if it has a tighter bed to go through. One thing I noticed when I first had my Mazda up and going was when I used a wood chipper as a crusher was I had an insane weight ratio per bucket. Somewhere in the ballpark of 9-10lbs per 5 gallons. Then the electric motor in the chipper died, I’m thinking charcoal sooted up the brushes or it just choked and overheated.

So I made a more traditional style crusher, and I like it a lot. I get on average 6lbs per 5 gallons.

I think the main advantage that the chipper had was instead of pebbles of charcoal I got flakes. The chipper was very simple, two blades 180 degrees from each other slicing against an anvil. I want to try to recreate that but in a simple and consistent way.

I need to take a look at the chipper and try to blueprint my idea out.

I’d like to have a central shaft, maybe with an arm or two inside the feed area to stir the charcoal around and prevent hanging up. The central shaft would also allow me to have a hand crank on top, like a coffee grinder or attach a pulley for a motor away from the dust cloud. Could be fed with a ramp. Ideally main area would be cylindrical to prevent charcoal from not passing through the blades and anvil.

With washers I could set the gap to find an ideal range and reduce the amount of dust “waste” i.e. what doesn’t become fuel and instead goes to compost.

I’ll see if I can find the guts, I took the chipper apart to try and fix it, I can take some photos of how it’s set up. It wasn’t worth a hoot to actually chip anything other than twigs so I’m not going to cry over it. Fairly simple design and I think I can replicate it with scrap, I don’t think the blades would need to be very sharp.

I dont use a crusher I just use a shovel and chop up the fuel in a 55 gallon drum as I screen it. I dont have to then deal with dust from that process. I get about the same weight as you about 12 lbs pr 10 gallons.

I think my main issue with dust was from the chipper spinning so rapidly. With my traditional crusher I’m rotating by hand, maybe 30 RPM with a 17" steering wheel if I had to time myself, I didn’t see any real dust other than what was falling into the bucket with the fuel.

I also pre-screen so I’m only crushing big stuff, same as I did with the chipper. Anything that can pass through a 1/2" screen but not through a generous window screen. Then I’ll re-sift the processed stuff.

I made some coke
And I have some. Charcoal I want to show you guys the difference

When I get home 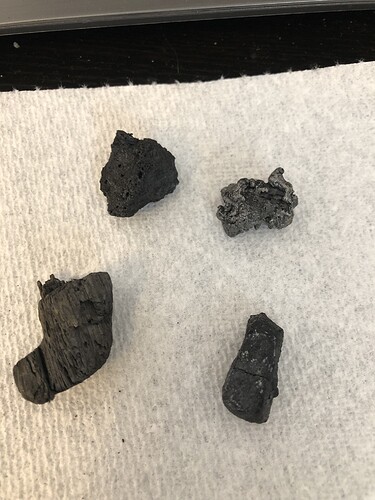 The top two are coke I made for some Bituminous coal fines.
Bottom are char a medium hardwood ( Black Locus and some red oak )

Both the charcoal bits ( about he size of thumb nail, perfect gasifier fuel ) are about the same.
There might be some graphite formation on one but its minimal.

The coke is partially turned to graphite on one ad the other batch is just purified carbon ( high ash though ).
Hardness is a lot greater than biochar , the shiny one is more brittle the darker one more porris but less likely to break up…

What i am trying to understand is why the coal can be coked to make very hard stuff that resists crumbling and I can’t make the charcoal turn out like that.

Is it lignite or anthracite coal?

Wallace,
Just what came into my head, isn’t coal made underground at high pressures over a long time (Diamonds??)

, while charcoal is made from wood grown at atmospheric pressure at much lower density? Does that make any sense? Coal / coke would have more carbon atoms per cc, less volatiles, smaller air spaces?

Tilt barrel method of making charcoal will result in softer more fragile pieces of charcoal. For biochar it will really wick of the moisture in the ground. Charcoal made in a retort and at a higher temperatures will be the glass sounding pieces.

charcoal is made from wood grown at atmospheric pressure at much lower density?

Ya I wondered about the density differences, but the coke is full of tiny holes like a sponge.

I made missed batches with coal and wood together and an interesting thing happens.
The tars in the coke seem to act like glue and ooze out binding the char.
I wonder if this tar that burns up acts like glue hardener…

I don’t have any here, but when I worked at the oil refinery I had some coke from the cracking units. ( we threw this away as waste )
It was very hard too, in hind site it would have probably made great gasifier fuel too.

You bring up a good point about fuel density higher carbon content.
Thanks for the thoughts and suggestions.

How to apply these to testing?

coke from the cracking units. ( we threw this away as waste )

I wonder if this is related to the “Carbonite” that @f_pal was talking about?? Used in France in older times…

If you link the comment or more information I can look at it.
I googled Carbonite and did not find any references to oil refinery coke

Key to making dense charcoal is heat the wood as slowly as possible. Heat it fast and the stean eacaping will produce a poppcorn effect.

Key to making dense charcoal is heat the wood as slowly as possible. Heat it fast and the stean eacaping will produce a poppcorn effect.

Here’s one method, a bit more modern than other Japanese kilns. Iwasaki style. Intent is for blacksmithing charcoal. 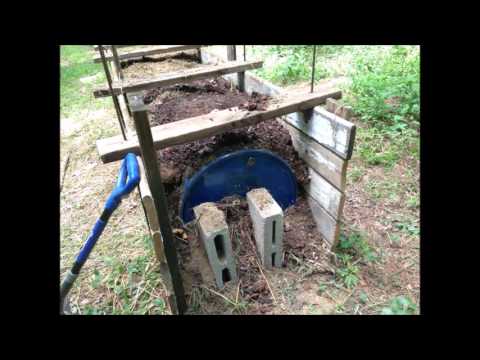 The heat from the fire drafts through what becomes charcoal and out the opposite end. Not sure on the % full converted though.

Beware of Binchotan charcoal though, not sure how true it is but Binchotan makes less carbon monoxide and is allegedly safe to use indoors. 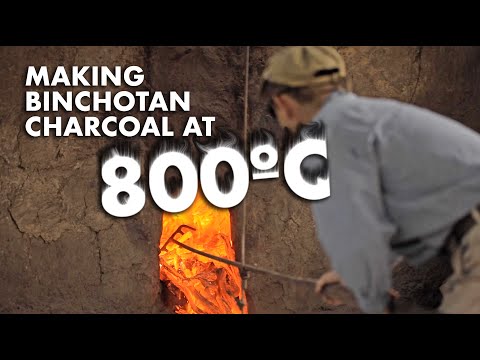 Wallace,
That was an obscure reference, I admit!

Here is the link to the @f_pal topic:
Recumbent bike with motorized gas trailer - Projects - Drive On Wood!

I am working on the article he linked to in post #4, The link does not work and I found it the hard way. Article is in French, I am working on translating because it is interesting. To cut to the chase, carbonite is ball-shaped compressed chunks of coal dust and powdered pitch (wood tar) as a binder. I am better at finding translating tools now. Soon a text file…Here is a preview…

Click on the jpeg screen shot and it will clear up a bit.

I made some coke from good shiny anthracite a while ago. I had to mix the anthracite with wood to make it in a tlud. After a bunch of trial and error, it worked with about 80% wood 20% anthracite. The coal had a LOT of water in it. Much more than the 20% wood has. And the few pieces of coke I managed to make were very low density, like puffed wheat, or maybe cheese doodles. Coal was formed in ancient swamps, so naturally, it contains a lot of water.
Rindert

This guy is from my neighborhood, an extreme athlete and a good innovator, he and my brother Paul cycled on recumbent bikes and debated a lot about construction, … now he lives somewhere in America. 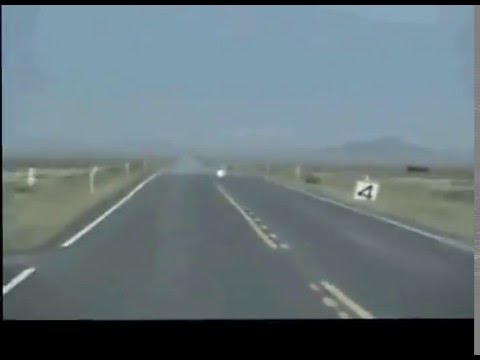 Long time ago there was a price for the first person hitting the 100 km/h. I dont dare to look how long ago😁