Not sure if you guys are following LED bulbs, but Walmart has the best price on 60w replacements I’ve ever seen - they’re $2.50 right now. These are also the lowest wattage at 8.5w. Off grid folks should be all over these! 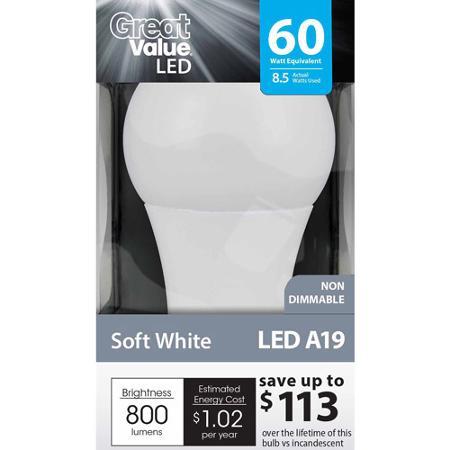 I’m switching over my cfl’s as they go. Unfortunately they last too long. $3 is really cheap. My LEDs so far have all been Sylvanias have not tried the no names yet. I think they are awesome; no warm up time and no ballast hum. I prefer the warm not the cool; the cool blue make me think I’m in a tron movie.

Yep, I vastly prefer LEDs over the curly cue bulbs, the light is extremely close to old time incandescents. And at least at our house, the CFLs did NOT last very long, especially in bathrooms or enclosed fixtures. The ones that are still hanging around are getting dimmer and dimmer.

I did get a batch of cool white bulbs by mistake; these are now in the shop, where they match my 6500k florescent fixtures quite well. I like the cooler white for working, keeps me alert. Warm white in the house, for relaxing.

I have been purchasing Cree LED bulbs because they are good. I have purchased some online for cheap and none have lasted.
Last week Home Depot had a sale too and I bought two 2 packs. They appear to be the same bulb?
http://www.homedepot.com/p/Philips-60W-Equivalent-Soft-White-A19-LED-Light-Bulb-2-Pack-455584/206261537

Thanks chris, I will keep my eye on the wallmart led lights,not too far back the cheapest on line sale was 5 bucks each.I got a lot of the cfl lights burn out fast too.

I gave a try on the led bulbs I grabed there cheapest lowest watt 5 actual usage and with my modified inverter it hums I also picked up the next in line 9.9 actual watts no hum in case anybody else is looking to try with a modified inverter you might want to buy one and check it first.

I’d gotten some Costco LED bulbs and they buzz like no tomorrow on PUD grid power. I can’t use them inside except for the door light in my shop because they drive me nuts.