Well winter has officially arrived here in Canada!! For some time now I’ve been trying to think up a cheaper way to keep my horses water from freezing during the winter. For the last 4 years I’ve used the 1500 watt in tank heater. It has a thermostat built in so that it will only keep the water maybe 1 degree above freezing and then turn off. However in the crazy cold weather we get here it still seems to run almost 24/7. This heater costs me around $120-$150 per month to operate!

The first thing i did years ago was find an old deep freeze at the dump. This is what I use as my water trough. After all a freezer is a water tight, insulated box, perfect for trying to keep as much heat in as possible! I cut part of the lid off, about 16 inches wide. That way only one horse can put their heads in at once to get water. Again this was an attempt to keep as much heat in as possible.

Anyway, i had a brainwave recently, and this is what i came up with… 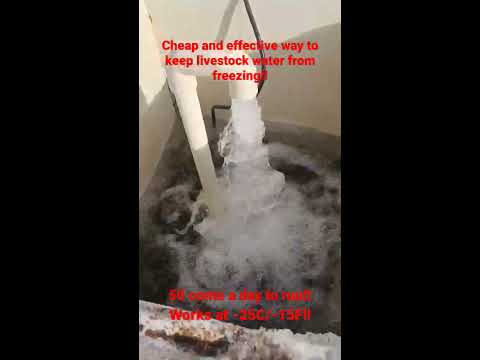 Keep your animal water from freezing!! 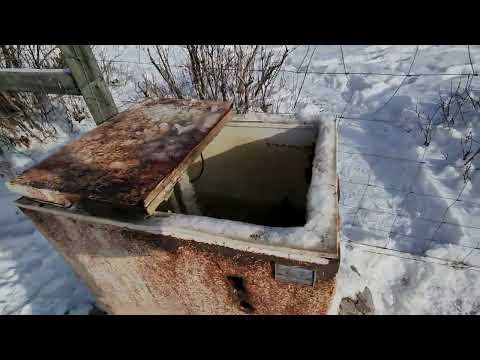 As explained in the video, based on my electricity cost of just about $0.10 per KWH, this will cost me about 14 or 15 dollars per month to operate. The other night when it was -25C/-13F it did extremely well! There wasnt the slightest bit of ice forming. So i do believe this will still keep the water thawed when the temperature drops even more. How much more is yet to be seen, but i have hopes it will still work in -30C. I also hope to get an energy monitor so i can see exactly how much power the pump is drawing.

So for anyone looking for a cheaper method of keeping livestock water from freezing in sub zero temperatures, this has proven quite succesful so far.

I believe i have the answers as to why this works so effictively. I had one woman comment to me that this system will be useless once it gets much colder because “rivers and streams all freeze solid in the winter”. I know this fact well, as theres a fairly substantial river that runs directly through my property, and the surface has been frozen solid for some time now.

However i believe this system to actually be superior to the anti freezing capabilities of a river. Flowing water doesnt typically freeze as quickly as still water. This is because the water has some varying amount of kinetic energy. Water needs to give up a substantial amount of energy to its environment before it will freeze. So whether we add energy in the form of heat, or kinetic energy by making it flow, it will have a hardsr time freezing.

The first reason i believe this works so well is because it is an relatively high flow rate, about 26 gallons per minute through a 1" diameter pvc pipe. My river may me flowing 100s or maybe even 1000s of gallons per minute, but its also a very large river. The velocity of the water at any given point i dont believe is anywhere near the velocity of the water in this pump.

The other thing that this system does that the river does not is mix the water. It pulls water from the bottom and dumps it on top. Firstly, this agitates the top surface of the water, making it harder to freeze. The other thing it does is maintain a more even temperature throughout the tank. Many might not know this, but water is actually the least dense at about 4 degrees celicus. That means that any water between 0 degrees (freezing) and 4 degrees will actually be at the BOTTOM of the tank. The warmer water will be at the bottom, not the top. Thats the reason ice forms at the top of a water body first, and not the bottom. So i believe this system is taking advantage of many factors to become a very effective method to keep water from freezing.

Also a river has a wider surface area exposed to the cold.

I think your insulated box and flowing water will work just fine.

We have to keep one of the sinks at a slow drip to have water flowing or else it’ll freeze in the winter. They didn’t bury the pipes deep enough going from the pumphouse to the house.

2 Hole LAPP Energy Free Cattle Water Drinker | Farm Livestock Waterer – Gallagher Electric Fence Products from Valley Farm Supply.
Look into the energy free waters. They work by pulling ground heat up through a conduit you put down below the frost line. I have one in NH that was installed in 1993. It works great when it gets down to single digits F i pour in about half a gallon of hot water once a day to keep the float from freezing. Below 0F i will add the half gallon of water twice a day.
If it is -10F for a full week or -30F for a couple of days i might have to open the water and heat the metal 90 degree fitting at the top of the riser pipe just before the float. That might happen once in a winter here. But it is definitely the best waterer i have ever seen. My uncle had a lenght of heat tape in the waterer on the pipe run up from the bottom to keep it sealed. The valve never frooze when we had power in the barn to run that one lenght of heat tape. But even without electricity it works fine here.

We have to keep one of the sinks at a slow drip to have water flowing or else it’ll freeze in the winter. They didn’t bury the pipes deep enough going from the pumphouse to the house

If you go down about a foot and place 4 foot wide foam board insulation over the pipe it will probably solve the problem. There is a foundation design that depends on foam insulation instead of a frost wall around a slab foundation. I forget the actual design requirements as it was about 20 years ago i studied different home designs.

That sounds like a very smart solution! I was thinking about digging below the frost line and circulating the water from there to the tank and back, however the grounds been frozen for about a month and half now so it was too late to give that a try. However this syst seems to work just fine so far and saves me having to dig a hole, and it eliminates the possibility of leaks forming underground, a few less points of failure. I’ve been considering doing some sort of a cheap diy geomthermal system maybe for taking the chill out of the chicken coop or pig pen.

Those energy free cattle waterers where new around here when we bought this one. My uncle agreeded to buy it on the terms that it would be my problem if it froze. I was literally just out of high school and working for him at the time. I figured it had to be easier to heat a well insulated plastic thing than a metal box outside in the winter. Those old waterers we had where really energy hogs with an electric space heater in the bottom then when they finally rusted through bad things happened…
I am very happy with the energy free design. If i had power in the building i would use a heat tape on the pipe but only to be parnoid. I do need to replace the gasket on this one now that i think about it but that is super easy just weather stripping.

This is also a great solution i have seen. The animal pushes down on the top valve, it fills the bowl up and they drink, and when they pull away and release the valve the water drains out to below the frost point. Just like a frost free hydrant works.

Great concept JustinH.
Another plus is it will keep the water aerated. Critters seem to like this too.

One lesson I learned from my own was-young-innovative is any system that requires a constant or near-constant running motor source, is to always be ahead one replacement motor-pump.
Those run hours they do add up. Failure will happen. And happens when you’re not there.
In your case you’ll freeze up, unknowing.

My case I this when my at 17 y.o., seemed a better-idea clear plastic blown inflated car restorer bubble cover draped limp frosty and crunchy over my old MG1100 sedan. After the 2nd old clothes dryer blower worn out, I gave up on near-instant, easy-do, inflatable structures. Brrr. Dumb-dumb. Ok inside in-the-blower-breeze in the hot weather. Stupid cold inside when not. Ha. In my case this failures experiences also turned me off on plastics for years too.
Regards
Steve unruh

Steve You reminded me of a late night at work once. I installed a bypass pump in a cooling system so when the primary pump failed there was a backup. About a year later i guess the supervisor told me the cooler was down again i thought no problem a couple of valves and a swith and the line will be running. That was until i opened the cooler to find a note from the 3rd shift about 6 months earlier saying the pump died and they switched to the backup. I was so pissed showed my boss and told him you can’t fix stupid the line would be down while i sourced new pumps. His boss almost fired me for that comment. I often wished i left that company sooner.

Unfortunately thats all too true steve, for any electrical equipment. I’ve had 3 of the in tank water heaters short out and fail over the years, which there again leaves me with a frozen clump of ice!! The tank heaters arent cheap either, 100 bucks a piece! I can buy one of these pumps for cheaper. I will keep posted on how long this will last, hopefully a while!