Need to clean things up a bit, so:

This is a chipper out of a sawmill. Not a horizontal feed but more on an angle to be feed from a second story. Real slab of iron here.

Trailer was with a JD Roto Boom pulled behind a dozer, back in the day. Tires are dry rotted but kind of hold air. Another real slab of iron…

Last slab of iron is the Red Diamond IHC 450 gas banger. I used it to power an old circle mill. Been setting out side for at least 5 years.

The blocking is rotting under the engine and chipper so it would need some serious blocking chaining for transporting.

Selling it all as one.

When it dries up in the spring I can bring the back hoe over to help move it. You would need some kind of low boy trailer to move this pile of iron…

Make some kind of offer… Or maybe some kind of trade. I like old Wheel Horse and old Cub Cadet garden tractors (manual transmission or hydro axles without the pump motor). Transaxle and running gear, not interested in the engines that come with them. Logs for the mill. Farmall/International Cub rims, tires (rear) and rear-ends. Or cash… 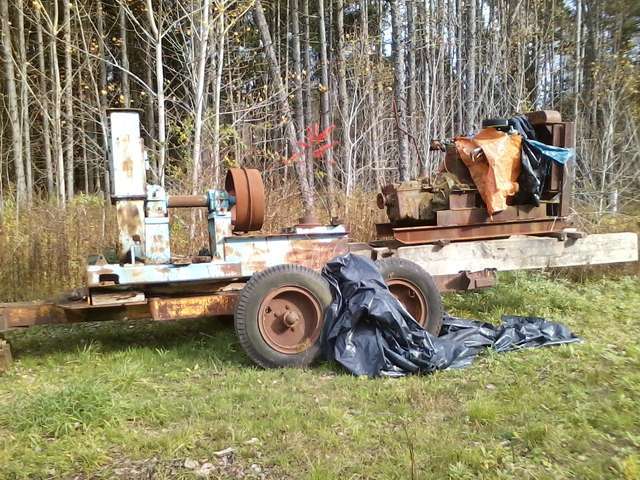 Wow that’s cool stuff. When I was a kid we had an old bus converted to motor home which had the international red diamond 450 in it. That was a beast of an engine. I still remember the sound of it.

It had a nice sound on the sawmill. It would slip the belts enen on NG.

I would risk the boss lady’s displeasure to get my hands on that, but PA is a bit too much of a haul just now.

Chopper is sold. Keeping the trailer and might put the log arm back on. Better keep the red diamond for something big, just in case.