chunker made and running, needs some fine tuning.

Fly wheel/gearbox from what I believe a Massey Ferguson square baler (model unknown). Baler was being sold for parts and was picked up for scrap price. need to look around for these best way is word of mouth as people not interested in selling on internet auctions/listing are the ones with several of these rotting in the field. 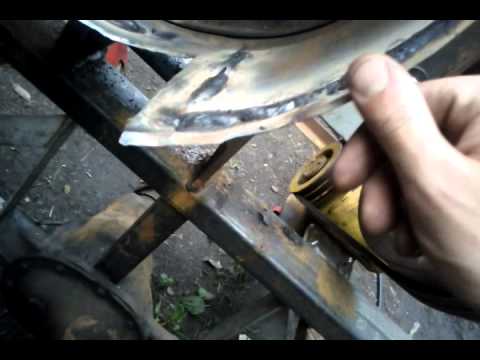 Lookin good!
I sure like the electric motor… Quiet = very good!
Looking forward to more video, when ya get more time to work on it.
Good Stuff
TerryL

and there you are with a finished unit! Very good design using a simple setup with ease of access. Watch that “fang” spliter sticking out there, it looks hungry. There’s even a spare pulley to power a conveyor to stack cut wood for you, and the whole thing is portable to boot.

Great job Dustin. I am getting close to having mine ready to go. You worked much faster than me. As someone who is going through the process, I really do appreciate the work and thought that went into it. What kind of baler was it and where did you get it?TomC

On your motoers base plate adjustment if you put a set of SBC valve springs above the plate also. With loose slop fit lengths of all thread up through it all then gives you an easy adjustably with springs shock cushioning. You can valve collar lower/upper stack for gross range adjustments. Fine tune with nuts on the all threaded rods. Make it tool-less even with arms welded onto the adjuster nuts.
Not speculation. Done this. Woks well.
Best Regards
Steve Unruh

Dustin,
Nice job on the chunker!

Looks like a nice workable chunker. I love the scrap yard stuff, very nice job. Looking forward to seeing it in action. I know where there is an old bailer going to waste in the corner of a pasture. Thanks to you I will be retrieving it in the near future. LOL. Great idea, good luck.
Gary

Not trying to steal Dustin’s thread, but the heading seems the best place to post my addition to DOW. I am posting a Youtube of my “chunkier (square bailer)”. First I would like to give thanks to Doug Brethower for the basic idea. I honestly looked at the old bailer many times wondering what I could do with it. I have posted a video of my chunkier on the rear wheel of my Farmall, and I’ve posted a video of chunking with a chain saw and I also bought a buzz saw for making chaunks. I think this is going to be my utopia of chunkers. It is and old International model 46 that I bought 25 years ago ($100). I have bailed hay with it every year until this year. As you will see in the video, I took the fire axe to it just behind the main gear box. Then I cut up a 14" tube I had purchased several years ago to build a WK gasifier. I married the two and had a good wood chunkier. The old fire tube was 5/16" thick so I used the torch to bevel the cutting edge. ( started to grind it on but ran out of patience)
Anyone coming through Crivitz, Wi. ( like it is a major city that people come to ) give me a heads up and I’ll have some wood chunks for you. 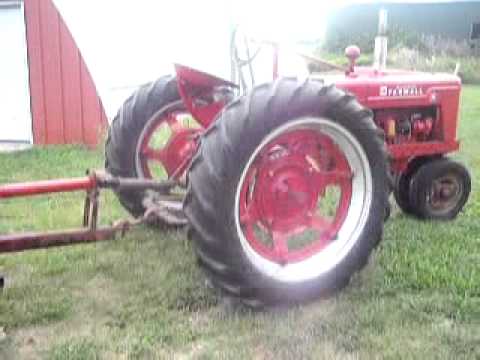 looks good Tom! This is by no means my thread and hope that you and others will post their experience with the hay baler chunker.

I really enjoyed seeing the old is it H or the big M Farmall, I grew up on an old H, I will never forget how long it took to plow a section of wheat stuble with a two bottom plow back in Kansas.

That looks like it will chunk wood for ever. Very good build ideas, and the baler gear box is perfect fit. Thanks for the video, and watch those crooked limbs that jump when cut.

Thank you for the kind words. I hope others are able to find old bailers around. I don’t know why the farmers that are just keeping them in the barns won’t let them go. The small farms are gone around here. The square bailer was too labor intensive so most small farmers went to the round bailers, now the big farmers have taken the little farms and they use hugh choppers and semi trucks. The square bailer has always been a piece of equipment that a farmer kept out of the weather, so it seems there should be some hidden in the back of barns. Might take a little persuading to get the old farmers to let go of them.
That is about a '46 H. I had the engine rebuilt and it cost me 5 times what I paid for the tractor. But it sure starts better than my other one.
Yes Carl, I have got to learn to hang onto those limbs— they don’t just shear off like wet pine or something-- they kick. By the way, I measure the cutting blade and it is 3/8 ". Something besides the blade is going to have to give if I try to use too large of pieces.

Tom…One thing I found out about sharpening my chunker is that it is better to take the same amount off the inner and outer sides of the tube. Maybe it is because mine uses more brute force than speed but what I found was that by taking the excess metal off from just one side caused it to side load in one direction causing my tube to swell in that direction. I don’t know how others do it and maybe not necessary with higher rpm thinner chunker hubs but keeping the sharp point in the middle works much better for me. Just a thought .
Gary

Great Chunker Tom Collins!!
An oakwood eating machine.
Even sounds and shakes like a baler, loaded, working.
Ha! Took me a day and a half to get a good enough line to download and see. Well worth it.

Getting farmers, boatmen and other to peal-loose of the old stuff needs more than just money. They are giving up on memories there. Dreams even.
What works is showing them that thier old’un will be getting put back to work making sweatsmiles again.
Just having my old can-go-anywhere 86 Ford 300 CID pried out of my hands (and hopes) to go to a local loggers 14 year-old young’un as his first. Great first one. He can keep it as a factory computor controlled feedback carbureted hybrid. Take it back to a 1966 non-electronic factory system for carburation and points ignition. Or step it up to a 1995 full electronic fuel injection. All this with just OEM used bolt-on’s.

So anybody old farmer dickering on a long stored baler show him TomC’s video and show it is not headed for a Chinese melt-down. Gonna be put back to smiles making working.

Dustin you’ve started something here. I know Doug Brethower built the first baler chunker… but yours as an electric standalone makes a heck of a lot of sense.

Despite the time and effort I’ve invested in that V8 chunker, I think I may have to “switch gears” and go this route instead. More on why in another post.

I’ve just secured a reasonably priced gearbox very similar to yours, and hope to be chunking wood with it quite soon.

I am amazed that you guys are coming up with the gear box alone. I had to weld a new tongue on my bailer to tow it out of my shop and still have to junk the rest out.----there are still some goodies on it that I need to take off. For what I don’t know, but I junked out a combine a while back and have kicked myself ever since. There were some “goodies” on that also. So how about sharing your gear box find. I think other would like to know. If you have already found a 14" cylinder for a WK gasifier, go back and get another piece for your blade. Looks like it is going to work out better than a rim.TomC

Hi Tom,
Nice job on the chunker, a little scary when the piece kicks up a bit. Maybe some kind of gate to limit the upward thrust in those situations.
I posted the cyclone information you requested. It’s in my First small engine run on 07/20/2014, 23:40 hrs.
Pepe