Been down all of this road all the way to building a CNC machine!! That is a really nice cutter, to make it better find a way so you are turning your part not tweeling the torch around. We used tools like this at the beginning and then later built a small table that we mounted our parts too and the torch would stay stationary. I later motorized it with a speed control.

Either way will work but you are going to use this alot I would attempt the later.

This one I had made for my torch but with a hose clamp the plasma cutter works pretty good with it. Just some 1/4" all thread rod, lock nuts on the ends and some coupler nuts welded into a “T”.
I’m just drilling a 1/4" hole for the center now. Need to find a magnet from a speaker or something in case I don’t want to drill a center hole. 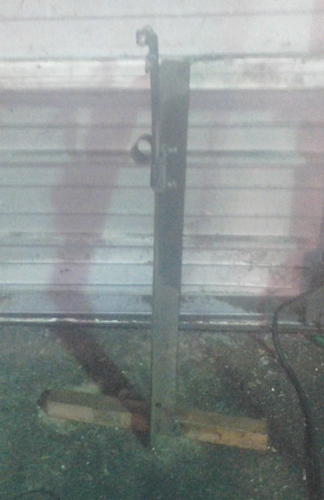 This was built to cut a straight line from the edge of a panel like a t square. Found out this last weekend it works great for cutting tanks or barrels even. Just put it up like the second picture and slide it around the tank.

The piece that clamps to the angle iron was part of a muffler clamp with two nuts welded on. The head of the torch sets in a piece of pipe and the handle rest against the washer and a bolt.

Yes, my friend Orlando who makes wind turbines, uses a spinner and he gets really nice cuts. Do you have picts of your table on DOW?

I bought the plans for a CNC, learned a bit about G code, then decided to hold off on it. I’m just building these for myself, so need isn’t justified. PlasmaCam looks nice.