I enjoyed Gary’s video so I thought that I would try to figure out how to post one. Let’s see if this works. 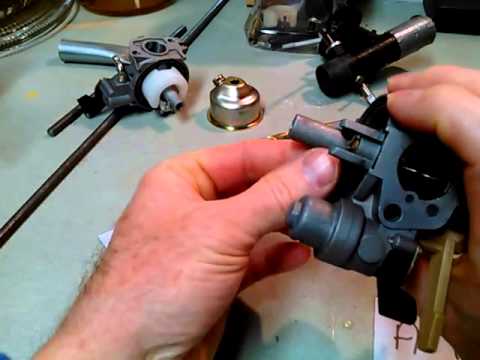 Thanks much for posting your video , I enjoyed it !!

Looking forward to seeing you again at Argos

It’ll be a blast seeing yah again, cann’t wait! And thanks for watching.

Hi Jeff,
I’d say your post is a success and very interesting, too. I’d personally like to build the carb you have built. It scares me to drill into the original carb.
Pepe

Thanks for the kind words… EBay has clone carbs for $15, so that makes it a bit easier. For other engines it might be possible to find a used junk carb. The other reason it’s easy to do,for me, is that these engines were bought for wood gas and I have no plans for them to drink gasoline so who needs the gasoline carb… But I know how you feel because it was hard for me to drain the dino oil out of the crank and fill it up with canola oil. 100 percent bio engine feels good. Of course if it seizes up someday I’ll go back to feeling bad.

Why canola? And please keep us posted with you engine running results.

Canola oil is one of the more stable vegetable oils. Meadowsfoam is another. So they make a good base oil. Stable in that they don’t oxidize as fast as other oils. I’m sure there are others. I have not got into mixing oils yet and I have a lot to learn. My goal is to press my own engine oil from some kind of plant that I can grow or a wild plant.

Plant caster oil was real and used early aircraft, motorcycle and auto racing. Was better that the then currnet petroleum based lubricating oils.
Ha! Just do not try slipping back into the far superior “natural” sperm whale lubricating oils. The GreenPeace’rs will get’cha!

On gasoline body carb to woodgas conversions the later alumimun body seem to corrosion hold up better than the older die cast zinc ones. I boned out many old take offs for their nice brass oval throttle plates for use in SS, brass, bronze and plastic mixer tube bodies.
Peace out
Steve Unruh

And it seems somewhere I read castor beans or on a “do not fly” “do not grow” list ???

Correct. The poison ricin is derived from castor beans.

Ricin (/ˈraɪsɪn/ RY-sin) is a lectin (a carbohydrate-binding protein) and a highly potent toxin produced in the seeds of the castor oil plant, Ricinus communis. The median lethal dose (LD50) of ricin for mice is around 22 micrograms per kilogram of body weight via intraperitoneal injection. Oral exposure to ricin is far less toxic. An estimated lethal oral dose in humans is approximately 1 milligram per kilogram of body weight. Ricin is classified as a type 2 ribosome-inactivating protein (RIP...

It has been used for assassinations.

I am full of worthless information today.

After about a year with the carb I have not noticed any corrosion. The Anodize (or what ever) on the throttle plate may have changed color a bit. Well i can’t remember, maybe it is a soft metal. I don’t think castor oil plant will grow here but it is one of the oils that have been blended with the base oils.

I would not mess with bean oil for this application.
Remove the intake valve oil seal, no special tools required.
This will allow some oil to slip past ( but it’s not a proper replacement for an air oiler and I am not sure you really need one ).

If I had to rig something up to drip oil I would look at something like Aeroshell 100 or higher heated so it flows.
That particular brand of Aviation oil is a favourite of mine because it burns very clean, has excellent corrosion protection qualities and sticks to engine innards better than most.
You really need very very little oil.

Another consideration here is the Honda design itself was created with emissions in mind.
It has a really excellent oil control ring.
Too good actually, these engines are poor top end oilers that need some help in some racing applications.
Reducing the tension on the oil control ring and scraper ring ( by heating so its less effective ) will leave more oil on the cylinder without reducing compression

The clone carb body is ordinary recycle beer canium.
Drill out the venturi and fill all the holes with Epoxy ( JB weld is fine )
Blend the air horn into the adapter for your gas mixer.

These clones need decent oil in the crankcase.
Improvised home pressed veg oil will not work in the long run.
I suggest for this application something like shell Rotella T or like mixed fleet type oil.
You want the high detergent package from a diesel rated oil to deal with the soot and keep it in suspension.
You should change oil every 20 hours, but I think if you gravity filtered through something like a toilet paper roll you could easily recycle a decent oil several times before the additive package was depleted.

I am new here so before I get too deep into this I build a lot of these clones.
There is a lot of room to improve a clone to take advantage of cheap and easy to get “speed parts”( often free to a dumpster diver ).
If there is any interest in this I can probably post some information and take some pictures, but I do not want to hijack a thread on my first post.

Wallace, hijack away…! Please…! How do we heat the oil ring? To be honest I have to keep working on the veg oil, after all the idea here is to replace dino oil stuff. I’m a low rpm industry type person not a racer.

You could start your own clone thread.

I just installed an Autolite AR3910X. Have not fired up yet to try it out. Do they help any?

Jeff I really want you to know I feel very strongly about NOT using veg oil in the crankcase.
This is just a bad idea, it does not have the lubricity or additives to do the job you are asking of it.
Its unwise at any speed and it will cost you an engine.
Veg oils even bean oil polymerize and gum when heated.
That is how castor bean oil works as it cooks it becomes a more complicated goo until it is varnish.
But in the process of becoming varnish it prevents metal to metal contact.
In the end however its varnish and the engines must be stripped and rebuilt because the lubricant itself has caused them to gum and and fail.
In your case your rings will gum up first the engine will smoke and eventually you will score the bore.
There is also a good chance the cam will wipe out the lobes too.
The exhaust valve may seize.
Hard to pin point exactly what will get you first but I put my money on the rings.

A soy or rapeseed oil will not perform like true degummed racing castor ( aka bean oil ).
The chemistry used to make something like Castrol M is well beyond the abilities of use home tinkering types.

Autolite AR3910X is a racing plug and and its not very good for anything other than racing to be honest.
You will not hurt anything by using it, but it will likely foul up on you.
Magic spark plugs do not make HP like some claim, rarely you can even measure the difference on the dyno.

Search for the Franz oil filter, I don’t think they make it anymore ( Doug Williams was a big fan of it and there is info on it at the Fluidyne site ).

In the dirty 30s lots of fellows used a cotton rope to wick oil from a higher container ( the dirty oil ) down to a clean container ( now the filtered oil ).
This process still works with modern oil but as I said before the additive packages are depleted by use and filtering.

Too soften up some rings you need a scrap block.
Center the rings in the bore of this block and heat them with a torch until they turn a deep blue ( do not heat them red hot never red hot you are simply tempering the metal not trying to anneal it ).
Most of the spring will be out of them and they will allow more oil past.
This is tricky as hell with the skinny oil control rings, but I have a lot of old rings I keep around to center and hold things in the bore as I set up to do this.

Thanks Wallace, your information is like Xmas to me. I don’t have a scrap block yet but the veg oil should speed thing up.

I understand your desire to go all veg.
Petroleum is a finite resource and I recycle all my used lubricants.
I also race with E85 or M85 not gasoline.

The local scrap yards are full of old clones at 3 cents a pound lol
These engines are classed as " irony aluminum " and I have sent a lot of them to early graves.

No junk yard is getting my clone carcass… Can use all the hardware and recast the aluminum.

Not sure what to use the cam and crank for. I guess that could go.

Some parts I keep as tribute at the alter above my work bench.

Sacrifices to the gods of speed…

Hi Jeff
I watched your video an new times because I want to copy your idea (enter the air and the gas in the engine with the original carburator). I think about the subject of restriction of the pass of the gas in the carburator. Do you constated loss of power in your setup ?
Thierry

I don’t have a good way to measure HP so I cannot honestly answer the restriction question. Maybe having a low restriction charcoal rig helps because the power seems fine with these small engines. For me I like using what I have and all these engines come with a carb and I have no interest in running them on gasoline after they taste their first gulp of producer gas. I think there is still room for improvement when using this method. I would find a junk carb and give it a try. That is one of the reasons I like small cheap engines, your mistakes are counted in a few dollars not hundreds.