I just came across this article that I found very interresting about a new technology created at Ohio State University that releases the heat from coal without burning it. I hope this is not too far off topic…it does pertain to energy. Anyhow this heat is harnessed to turn turbines just as burning coal does but the process releases 99% less pollutants than burning does. I thought other energy conscious folks might find this interresting. Again I appologize if this is too far off topic. 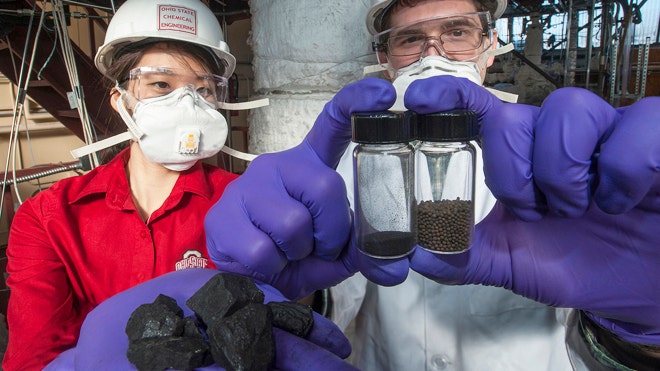 Coal: the cleanest energy source there is?

Researchers have discovered a stunning new process that takes the energy from coal without burning it -- and removes virtually all of the pollution.

Interesting. I wonder how this compares to gasification.

Wow, I always thought Iron Oxide was rust and vice versa. After reading Brian’s link I learned that there are 16 different known forms of Iron Oxide. This world is much more complex than I used to think it was! Thanks for the link Brian.

John C.: That’s what I thought until I took my welding class, which happened to correspond with when I came across Wayne Kieth and found my way here. My teacher was an artist by profession so she really went into the various types of “rust” (Iron Oxide) that one can try for that have different effects.

now this is really interesting…it allows you to capture the CO2 as nearly a pure gas…there are anaerobic organisims/bacteria that convert CO2 into methane at fairly high efficiancy, up to about 85%…and with different anaerobic minions you can convert methane to ethanol…or you can use a catalytic reactor process…

lol so your power plant becomes a fuel refinery as well