I wanted to share a picture of our core being unloaded here at Farley a few weeks ago, today is the last day of the refueling outage.

this is a fuel rod being taken out of the core

here is a video of a coal burners boiler burners, the updraft fireball is around 50 feet tall.
this one is similar to our Panama City plant
https://www.youtube.com/watch?v=wHMtwixo1n8

Is that pulverized coal shooting out of the intakes? That is impressive. I worked at a nuclear plant for a short time in 1982 (near Oswego, NY), but never got close to the steam-making parts! Thanks for sharing!

that’s up the road from me mike its shutting down claims not profitable.

Not my area but I am familiar with large burners.

The coal is pulverized and blown in with in with if memory serves about 5% extra air to ensure complete combustion.
You start with fuel oil in a large conventional burner to preheat things before the coal comes on.

I worked in a cracking pant and we had all kinds of coke but cost studies showed us there was not practical way for us to burn it. ( required more money than the plant was worth to tool up to use it )
And it was dirty stuff too so we went it to China where people would pollute their homes with it.

We need to invest more in nuclear.
I keep hearing about the possibility of thorium and salt reactors.
I hear in India and China they are working on using conventional heavy water reactors to use Thoruim fuel.

We on the other hand are not investing in this cleaner technology.
We designed and built reactors to extract plutonium from and thats what we are stuck with.
Its not a bad things its just a case of being painted into a corner and no one wants to be the first to try and cross the floor

Paul,
When I was there, I was in the “Computer” department. I was working in the old (Niagara-Mohawk- GE built) plant finished in 1969, one of the first large plants built in the USA. At the time, there was a P.A.S.N.Y. plant there and Ni-Mo was building a second plant, not yet finished. The old plant was shut down for repairs the whole time I was there (1982). I would have stayed, but I was not ready to set down roots so far from home… Ah Youth… There is such a thing as safe nuclear power, but politics won’t allow it. It also takes a huge $$ commitment from the power utilities and a true long-term viewpoint.

Wallace,
Thanks for the details! generating heat energy on this scale is mind-blowing!
I think there SHOULD be some experimental nuclear energy plants under construction in the USA right now.
It takes 10 years or more to build a large plant.

Mike:
Nuclear only works if the government is there to back stop the screw ups.

No money in it.

I went for a walk down the railway tracks to Mr. Mond’s nickel works were formerly located.
1976 photo the year the complex came down. 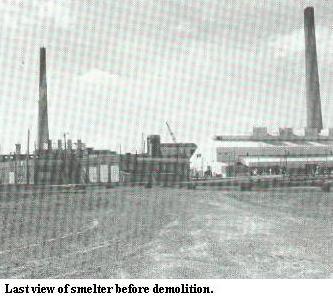 All along the tracks since I was a boy people have picked coal.
The furnaces required Anthracite and to this day it litters the track and you can follow the pile to the old coal bunkers.

So while at Toe Blake arena with my son ad his chums I walked the dog and filled my pockets with the stuff to show the boys.
My Dad delivered coal, pea coal in bags carried right into you basement for you ( because there was no NG infrastructure back then ).
I wanted to show the boys what coal was all about and why its seen as a dirty fuel.

I made a small pile of it in my back yard fire pit and placed lumps of char around it.
I put the torch to the pile and i was not long before the fire smoldered and came to life.
The smell of coal tar takes me back to my days in the steel works where I could smell the batteries turning coal to coke for the blast furnaces.

They are not impressed with my stinking fire.
I told them about the jacket heaters to warm water for the house.
The soot everywhere, the dirty little room with no use other than storage for more coal.
Clinkers, fly ash, more soot and the smell of a coal fire.

I just came inside from my back yard fire pit and the smell of coal tar is still fresh in my nostrils.
its takes me back to steel mills, my grandfather’s home ( with the sooty little room ) the foundries where I did my job, the cold nights on the picket line burning the coal with wood for more heat ect ect.
And its all gone!
Just a stinky little fire and story for the boys who will never understand.

Its a slightly breezy evening here in the nickel city and as I type this I notice my neighbor in her mid 80s sniffing the air.
I think she got a whiff of the past too, but you will be hard pressed to find too many people around here now that know that smell.
Except for the coal on thetracks

That smell brings me back to 1963 and fort leonard wood Missouri when. To old barracks were heated with coal

The house I live in (my parents 1946 built) has a sliding door room in the basement called the “coal room”. Ma would light the furnace with soft coal, and then keep it going with hard coal. She wiped down every room each spring with a soap liquid and said it was easier to do a decade later when natural gas came down the street.

All through my childhood we burned coal to heat our home.2 ton delivered in the fall through a basement window. when that was gone we would pick it up in town in 50lb paper bags. When it became my responsibility to buy it we burned wood that I cut

Hi Don
I was surprised to here somebody mention fort leonard wood on DOW. I live about 30mi from there.

Herb, Good to see you still hanging with us. Still planning a limo?

Never seen the soft brown kind of coal before I think that’s the kind the black smith uses if I am not mistaken.
I have an anvil I just never got around to the forge part of things.

No coal is to be found around me it was all shipped in by train from not sure where.
It was not the best there was but good enough to feed the coke batteries, roasting pits and blast furnaces of of my father’s generation.

My father used to carry the bags of pea coal into you home for a living lol.
My father in law was a motor man at INCO in the coal sheds and would use explosives to free up the frozen trains in the cold months to feed the furnaces at the nickel works.

Charcoal as dusty as it is so much cleaner burning from the start, and low ash…
Just observations that make you think about the old days…

Oh ya one more thought up here Doug we had cast iron doors on a lot of homes and the coal man would pour it into your basement,
Others had the coal man carry it in.
I think the pea coal was for a different kind of furnace too.
And underfed machine stoker that would push coal into the hearth and run a blower.
Maybe that was the industrial boilers I am thinking of.

At the mine where I work in the basement are 4 huge boilers and the steam plant that ran on bunker oil and maybe coal at one time.
They have been decommissioned and replaced with small on demand heaters for water and NG heaters ( lots if electric heat too ).

People problems?
No people no problems…
A plant once ran by 2000 men has only 150 who need to keep warm and shower these days…
And my handlers are working hard to bring that number to zero

Jim you have a good memory, I do still want to do a Limo!! Taking a little break from Woodgas right now but still find myself thinking about another wood machine!!

Herb, You will be the first one again to do it. Have you heard anything about the WoodPowerCaddy. Has it been driving around at it new home?
Keep on Gasifiing. Bob

I haven’t seen it. It is less than a hundred miles from me.