I’ve been on the hunt for a solution to produce the needed very coarse wood chips(chunks) from 4" and smaller diameter/width mill ends or trees/limbs. Here’s something that I have found is nearly impossible to find in the USA but seems commonplace in some European countries. Take a look at the following YouTube videos. This looks like something that could produce a lot of nicely sized fuel very quickly.

There is only one I have found available in the US. It’s not shown on their website rojekusa.com, but I called to get information about it, they said they have it for sale and would e-mail information when their computers are back up. I will post the info when I get it.

You don’t normally find videos of this type of chipper unless you search using foreign language. Here’s the words I used:

http://www.youtube.com/watch?feature=endscreen&v=QEzwdKSIyoU&NR=1 only usa model I can find 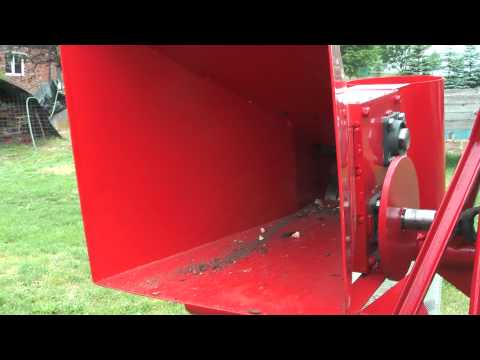 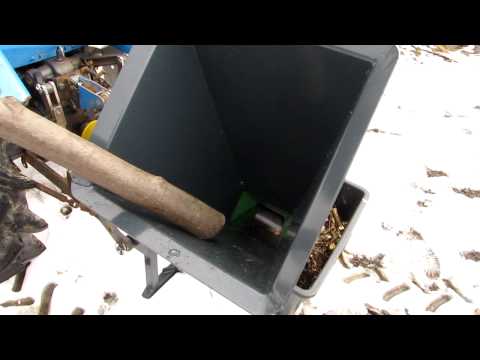 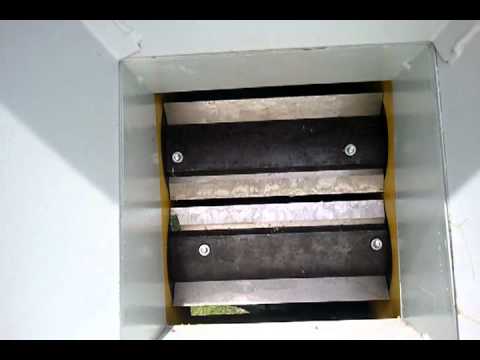 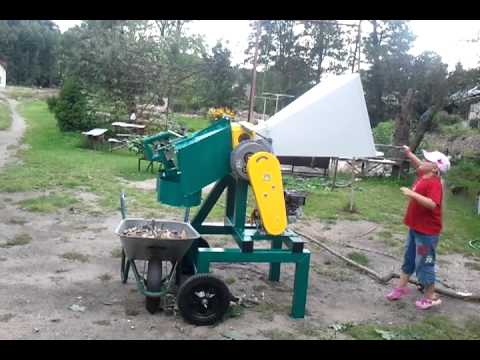 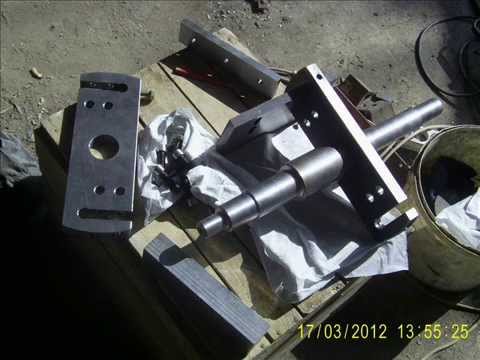 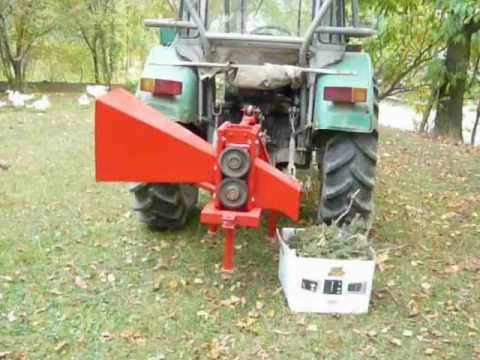 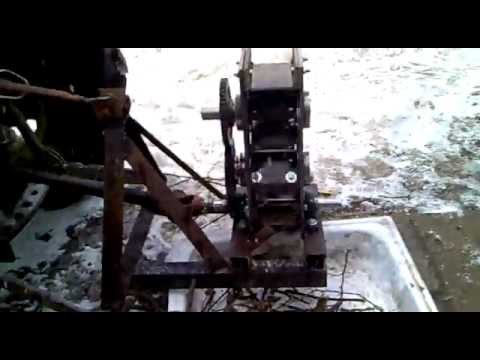 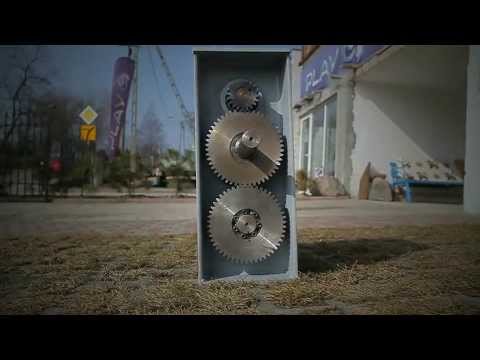 That is really desirable! I love the eastern, maybe northern European wood salvage equip. They are light-years ahead of us on utilizing every stick!

it’s funny: by coincidence, I just an hour and a half ago assigned the task to engineer and design a chopper like this one to two of my students as their engineering project.

I looked at this design a couple times already and I was always impressed by its simplicity and efficiency, but simultaneously rejected by its endangering nature. So one focus of their task will be to make it safe for the user (big issue in Germany!). When it is finished and turns out o.k., I will post plans and pictures (not before the summer, though…)

I found a manufacturer (if I’m correct, in the Czek Republic) 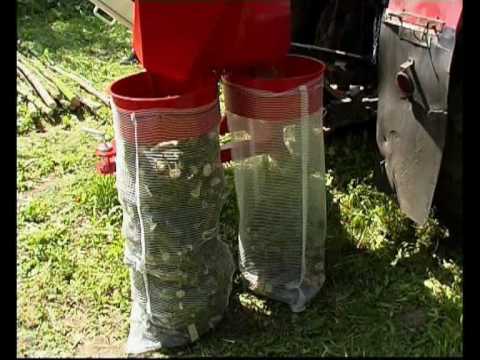 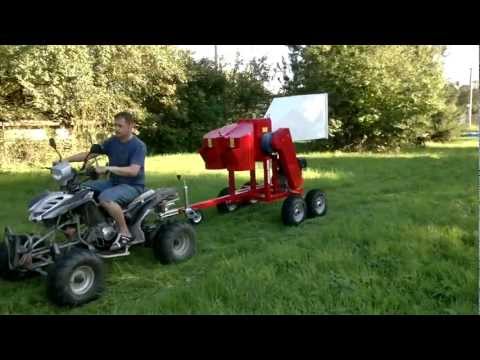 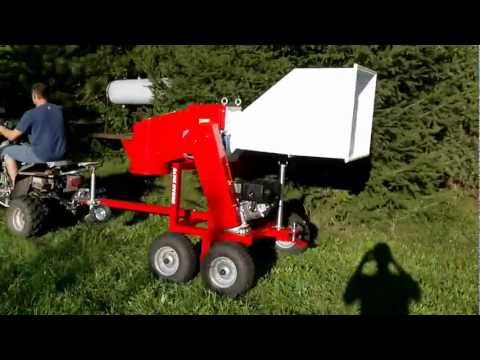 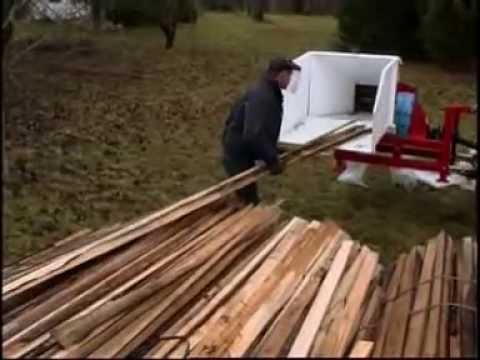 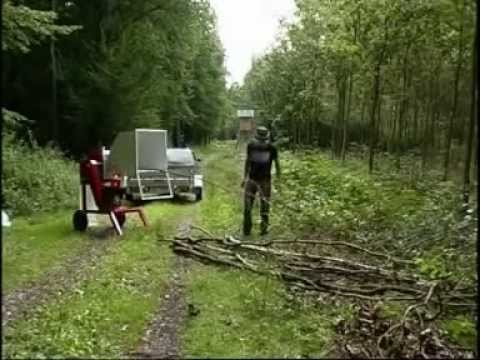 I figure this chopper is at least twice as fast as Waynes chunker!? Wayne, what would you say?
And the built-in sacking is neat, too, me thinks.

I have a question to the community:

Would this chopped wood in the pictures (at http://en.stepkovac.com/stepka/) work in a WK gasifier, or would there be a lot of bridging going on? The thin pieces turn out to be rather long.

Thanks for your opinions!

most Europeans have forgotten about it, but my grandfather (and people of his generation) told me about what the woods had been looking like at the end of WW2 and after that (probably up to the 60ies). You would not find a single stick on the ground, you would not find a piece of dead wood anywhere. It must have been like someone “swept the forest”. All wood would have been used for heating and cooking and all of the small sticks for kindling…

Someday in the future, when the dino fuel supply gets shorter, it will be like that again…

Sam,
I can see how a machine of this type would be inherently dangerous as the cutters are also providing the feed. Good for eliminating any unwanted appendages. I imagine a really big infeed cone along with a e-stop of sorts may provide some protection. My wood supply is mill ends, 2x4 mostly 4’ and shorter that need to be chopped to 2 to 3". You have some range for adjustment of cut length in the design of the rotor. You can use blades made for conventional chippers. I wish I could find one of those stepkovac units here in the US. I think I would have to own one of those. Maybe I should contact them about being a dealer!

These machines would sure make wood processing alot faster, you can burn alot of wood in a hurry if you drive on wood every day. I’m looking forward to the plans for one.

Ahh- one of my favorite (necessary evil) subjects.
I enjoy harvesting wood as long as it doesn’t interfere with eating, sleeping, fishing, hunting, and more fishing, etc. Wood I have plenty of- but I dont want the harvesting of it to consume all my time. Therefore as I move down this gasification road I’m trying to develop a plan to speed the harvesting of wood without buying 30 tons of forest harvesting equipment. But at the same time I dont want to be using a DR chipper if ya know what I mean. I have to be able to harvest wood faster than I burn it. I have been looking at commercial chippers (drum and disc) and I’m still on the fence with respect to chip size. The last thing I want to do is buy a 75 hp chipper and be making sawdust. The one piece of equipment that did impress me was the screw chipper made by Laimet. It is a simple design, self feeding, minimal shock loading, the screw can be sharpened with a hand grinder with some skill. The screw can have different pitches for different size chunks. I would like to see one of these up close. I might even try to build one or buy one. Too bad their not made in this country. There are some videos of the Laimet and even some home made screw chippers on u-tube. This is where I intend to put my resources when the time comes. Right now I have a line on scrap kiln dried oak for $50-65 a ton. That wont last forever and at some point I want to use my own wood of which I’m paying dearly for in property taxes. grrrr

Step 1- build a test gasifier- check
Step 2- put gasifier in borrowed truck and see if it really works- to be completed soon
Step 3- if step 2 works build new gasifier and buy a truck. If step 2 fails repeat step 2
Step 4 Find a way to harvest more wood without it taking any longer than it does now. 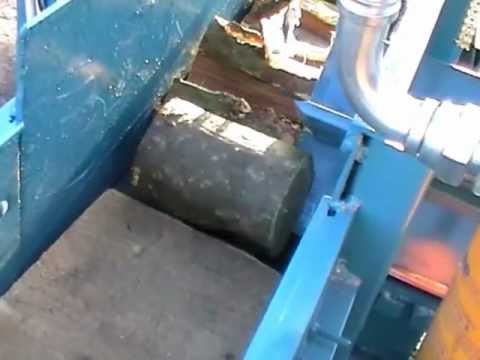 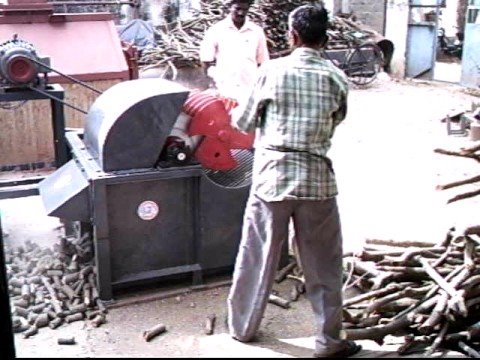 This has inspired me to start design work on one of these to RnD. This is just a rough draft for now, is this what one of these is supposed to look like. The core for mounting the blades is 1.5" x 1/4 wall square tubing. I was thinking just welding in a 1" shaft. I will look into what gearing is available and reduce this down for a 5 HP wood gas engine to run it.

I think I may need to change the blades around so more torque can be applied after the blades reach the center of rotation. The direction of operation is the top rotary blade is spinning in the clock wise direction.

Any Input on design would be great, Ill take all I can get.
http://jamclasses.drbanjo.com/static/dimages/Chunker.jpg I just your post above mine after I posted, so you think it would work better with three blades and with the cut at the top side of travel?

Matt,
It seems most of the ones in the videos use three. The distance they travel is going to determine the cut length, so if you have four it may be ok, just shorter pieces. I think it would need to be as beefy as possible, so thick sides to support the bearings, thick, solid shafts. The drawing I posted above looks like it is designed more like a water wheel, with two discs, probably to avoid machining.

Matt,
Nice Cad drawing. Wish I had the patients to learn how to do that.

I think Ill draw both up and build so the rotary assemblies can enter change. I would build it simpler using some angle and then welding some flat bar to the open side to from an enclose triangle bar. Then run a solid shaft through it.

Hey fellows
Before you get too carried away on bladed systems do some real pricing on blade sharpening and replacement costs. Toothed bladed systems all work nice when they are sharp. Now to get them resharpened is the real killer that multiplies by your tooth count.
This is why real woodcutters prefer skipped tooth saw chains. Less teeth to sharpen saves time to be out actually working/cutting.
Why on my mill I went with a higher rotational speed, sharpen on the mill, five tooth carbided tipped blade. 21" blade that can be user carbide retipped after resharpen down to min worn out depth.

Even buying cheap Harbor Freight Chinee’ circular “throw-a-way” blades get expensive fast on hard limbwood and hard knots.
Now hit one stray nail and the cheapest to the mostest bestest blade will be chipped, tooth broken off, and even torque twisted trashed.
You can try this all out easily skillsaw or table sawing before investing the time, energy and expense into a multiblade system.

Sic: look at all of the broken and worn bandsaw blade stock Mr Wayne has available. You think a really “Scots” fellow like him is not getting max life out of these before replacing? Band sawyer debate: better cost long run to invest to sharpen all of those teeth? Or just replace the bands?

The advantage of the shear blade systems is blade edge life and much less expensive sharpening costs hands down. Plus minimal wood waste. Toothed cutting blades always have a dusty kerf loss sawdust produced a general use designed gasifier will not like to eat at all.

Been there
Steve Unruh 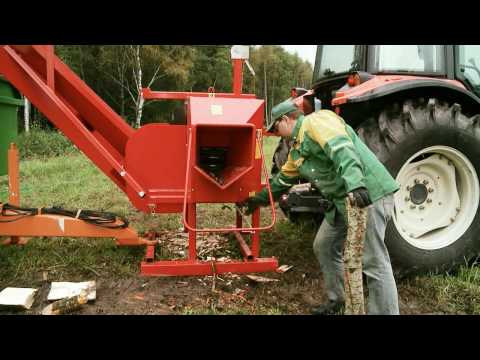 Saw this in an earlier post by Marvin W. a while ago - Could possibly be scaled down and cut shorter wood lengths?
I’m far from a fabricator but thought this might be of interest.

Steve G: That is basically a fancified Wayne Kieth chunker with feed gears and a conveyor belt to take away the chunks.

I tracked down the Rojek wood crusher that Derek refered to in the first thread as being available in the USA. I e-mailed Tech Mark, Inc. from Little Rock AR. They got back to me and said that they stock the DH10S gas operated model and are currently selling it for (you had better sit down) $6,150 less 15% current sale price. So for a fuzz over 5k this can be yours! I do believe I will be moving forward with a WK style chunker.