OK thanks cody, like mike gib said, no problems with flux core welding, they might even work better outside welding in the windy days.I never tryed flux core mig, though i welded with stick welder lots of years, I allways like welding with 6011 stick rod, because it is good rusty metal rod and hardly have any flux puddles.Good penitration rod 6011.and easy too weld with.

My issue with stick is I can’t get them to strike consistently. I know it’s all technique but I can’t be bothered when I have the Lazy Man’s stick. Flux Core is really a stick welding hot glue gun for metal. I think once I repair my dad’s old Marquette I won’t have much issues. Lots of re insulating the leads will need to be done and a new 240v plug.

It’s the old style Marquette where you change the amps by moving the Hot lead to another socket like a guitar amp.

You allso might want too pull the cover and look inside the welder, and see if it has a big capacitor, i had one like that welder , it was a fourney stick machine, and the cap wore out, that would make the rod more likely too stick when striking too. The capasitor on my welder was about the size of your whole hand and 2" thick,or little smaller.I think the voltage was low enough the cap was not too dangerous.I think it was a DC only stick welder.

I wouldn’t put too much time or effort into that old welder Cody. It is a transformer type machine and you cannot fine tune the amperage on it. Newer stick machines or multi-function inverter types have what they call hot start technology to help prevent rod sticking when you strike an arc. Cleaning your material and taking the time to find the ideal heat setting is key to any type of welding but most people just want to brush off the loose rust and if an arc can be struck they are satisfied to fight the weld. It will usually get the best of them.

Both of my inverter welders have hot start and don’t work for me in ARC mode, dad never had an issue with the Marquette it’s just in disrepair because he moved out of the house. 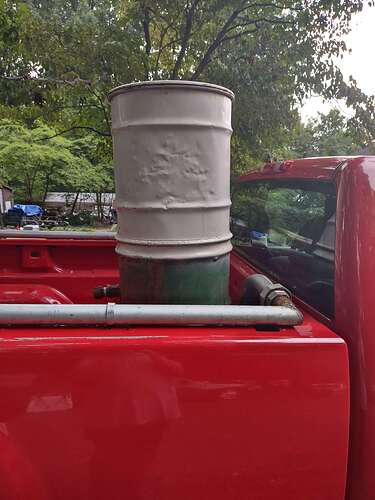 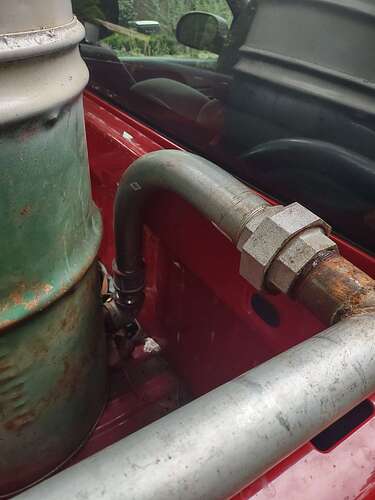 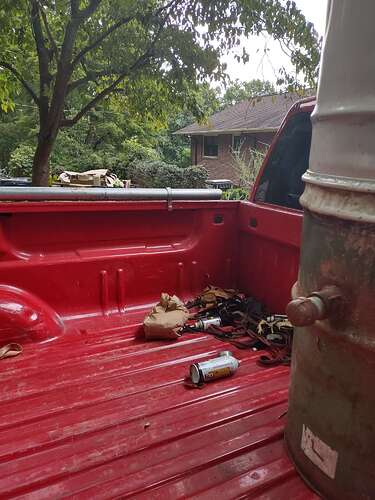 Alrighty, havent done a leak test yet, but it’s just sitting in loose right now. I have two locking rings that should fit over the ribs and I’ll make an attachment to hold it laterally to the bed, and weld on some feet tabs to bolt down to the bed.

Also need to put in a couple more of these fence post rings to secure the cooling rail some more. Also maybe shim the rings so it holds the pipe tighter. May just scrap those and use exhaust clamp rings for a more snug hold.

Wow talk about super stealth. It looks like you just have a barrel in the bed of your truck. I like it Cody.
I have seen trucks with protection rails like that.
Bob

Shimmed up the fence post rings using some old serpentine belt. Cooling rail is in there solidly now. 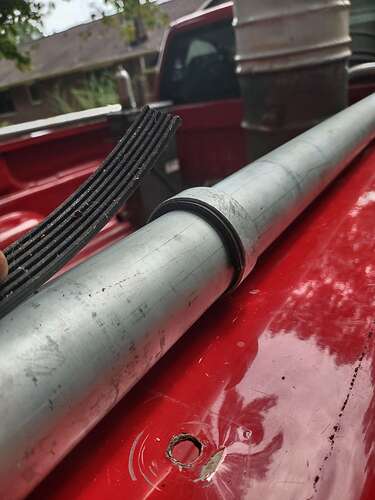 Looks good cody, have you desided too mount hay filters elsware, and are you useing heat exchanger on this build .? You are getting a lot more done than me, i think all the southern heat wave went north, felt like an oven outside yesterday,in a steam bath.

It’s just a charcoal gasifier, and I’m just running a bag filter. My old ammo box bag filter should work just fine. If not I have a taller can I will use with a pleated cloth filter.

I wanted to run a charcoal gasifier until I get the Mercruiser cast iron plenum put in, no worries about that.

OK thanks Cody, i forgot you been building charco gasifiers allso, I gess if you had lots of excess wood going too waiste laying in the woods, A good charco maker would produce cheap efficient engine grade fuel, Caint wait too see how many miles too drive before it needs refuel.

I’m hoping at least 30 or 45 miles. I have about 30 inches of hopper height right above the nozzle. Downdraft charcoal sorta like a diagonal arranged crossdraft from the Pegasus book.

With the hopper I have and the density of my charcoal I should hold about 40 pounds of char above the nozzle.

If I get the same 2 miles per pound of char I had in the Mazda that could be as high as an 80 mile range. I’m expecting a mile per pound though

Interesting build CODY, Keep us posted on your power,and miles per refill, Maybe a drive vidio,THANKS

Bought some 1/4" sized self drilling roofing screws to mount the gasifier to the bed. I’m thinking of making 4 foot mounts and at least 2 mounts halfway up the gasifier that fasten to the head of the truck bed.

Do you guys think that those screws will hold it down securely? Or should I go for a different way to bolt down the gasifier? Mounting has always been a part that I’m not good at.

If you have a spare clamp ring I would clamp around the barrel and weld some studs to the clamp wring to bolt through the bed, then another clamp ring or a piece of flat stock bent around the circumference of the hopper right at bed rail height, with a single brace straight over to the front wall of the bed hooked over with a couple of those self tappers right into the bed rail. That would be top and bottom braced and real easy to make. What I mean is think how Wayne use to mount the hopper with clamp ring and bolts welded to it

I thought my spare ring would fit, but it doesn’t close around it. Next best thing would be to shorten a 55 gallon ring.

I’m basically already doing what you described but just directly welded to the barrel at the stronger points. Right where the two barrels were welded together I figure is reinforced, and the seam at the bottom. I was just concerned if the self drillers were strong enough. I figure two screws for each leg on the mounts just for redundancy. Made sure to get some hex head ones as well so I can reuse them.

I’m using 1/8" flat stock, It’s 1.5" wide. I figure with them all pulling down on the gasifier it should hold it snug. The gasifier isn’t sitting directly on the bed so I have room to shim it tighter.

I tried L brackets and screws on the Ranger, but the screws or the brackets broke off due to bed flex.

Damn. I hope that’s not going to be the case with the Sierra. Where it sits on the bed I can’t reach up below to fasten any nuts. Frame and cross member in the way. Also can’t fit a hand behind the bed to the head board. Might just have to make a flat stock collar to squeeze it down.

Here’s as it is planned right now. Going to add two more on either side at the bottom to hold it from side to side motion. It’s stiff right now in back and forth motion. Has a little wiggle side to side.

In my first dry run before I added these, the gasifier was actually stable at 45 with mild bumps in the road. The gas exit is almost acting like a shared stress member.

If these screws pull out I guess I’ll try to weasel my way to use nuts and bolts. 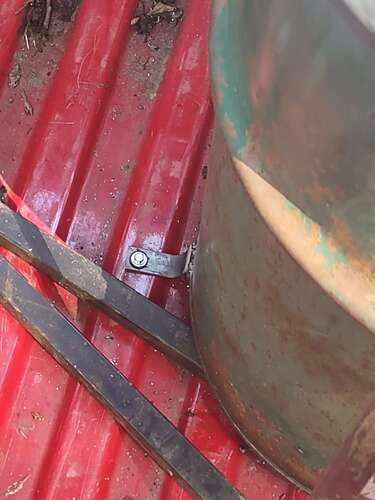 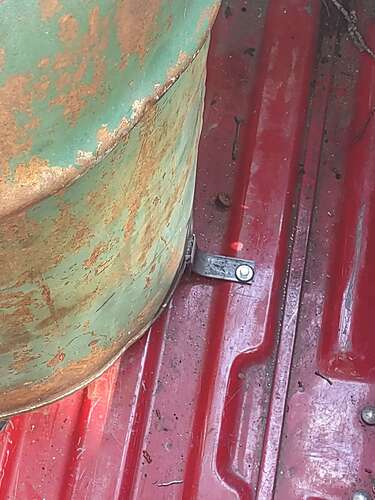 How about welding nuts to the bed for the fasteners? Maybe cut a hole, slightly bigger than the nut, and weld it “flush” with the bed bottom, the use short bolts or pieces of fully threaded rod and another nut?
Just thinking here, i know the problem when you dont reach the point where nuts are, or when tinkering alone, your arms arent long enough to hold the nut…