Forgot to make an open side post to just show off the truck and other Non-WK stuff going on with it. 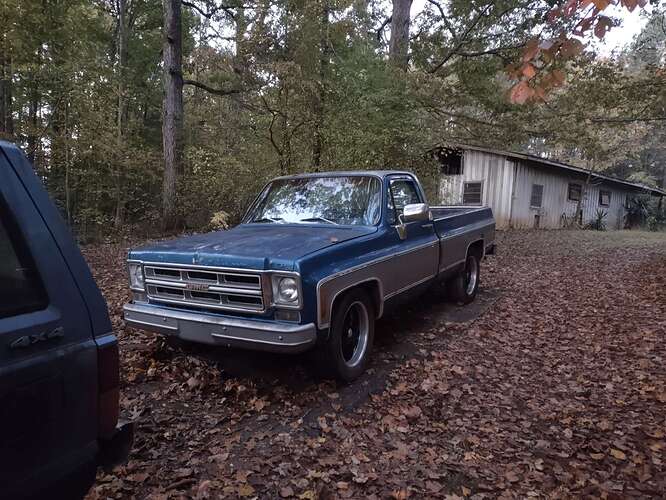 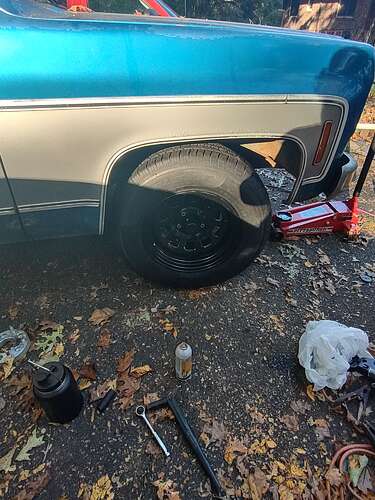 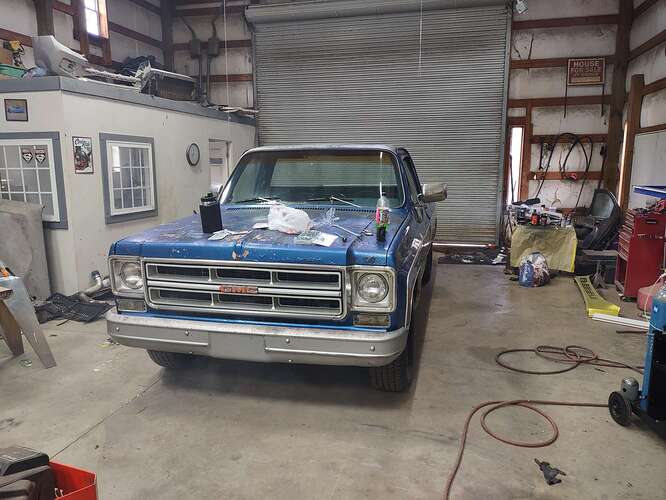 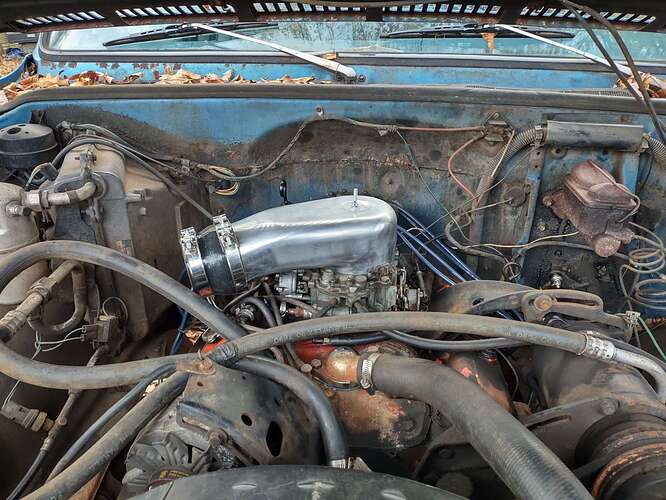 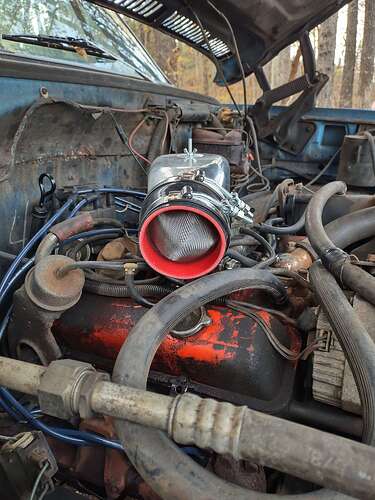 I figured I’d show the little emergency screen I discovered with this particular air cleaner hat. The hat has a 4" diameter mouth to attach a hose, and I got a 4-3.5" adapter sleeve. I also bought some stainless strainers, and one fits just perfectly coming from the 4" side and butting up against the shoulder of the sleeve.

My hopes is this will catch any errant soot heading to the carburetor, and also catch any tar that might be made on accident. I’ll need to find a couple more this size for swapping out on the road.

Well it looks like I need a heater core AND a radiator. I put some marvel mystery oil in the oil on a fresh change while I’m just putt-putti-ng it around the property to slowly clean the engine. Going through heat cycles basically.

I noticed the coolant overflow tank was bubbling steadily, uh oh it’s leaking somewhere. On the driver side I could see coolant very slowly sweating from a lot of the passageways where it meets the side. The brass has probably gotten fragile from heat cycles and decades of bumps in the road.

Well if I’m getting a new radiator then I definitely need to totally flush the cooling system and make sure there’s no rust. Time to check the block drains. I thought I had got it all but all I did was reduce the rust levels some.

Wish I had money for a nice fancy all aluminum 3 row radiator but I think there’s a much cheaper option at the parts stores. This truck has an external transmission cooler and A/C condenser so I don’t need anything fancy.

Cody, I have replaced a lot of radiators. I have found that the ones that are on Ebay are equal to parts store radiators at really good prices…

The parts store radiators are selling for just a hair over 100 dollars, luckily because it’s a popular truck model it isn’t too hard to find aftermarket parts.

But there is an all aluminum 3 row radiator on eBay for 150 bucks. Might drop the hammer on that.

Check rock auto i got rad for my 79 bonanza there it was cheap and truck runs cooler than it ever has. And I’ve had it over 20 years

I checked there, they only had plastic capped radiators listed. Not really a fan of those if I’m having to pay for them.

Yeah iunderstand that, kinda hard to repair. The 79 is a rust bucket so i hated to spend much on it but was changi g jobs and wanted to drive it to work daily for a while.

Truck is tagged and titled.

The beauty of most of our States is when a vehicle is older, no more inspections are required. South Carolina never requires inspections even if it’s a brand new vehicle, I’m jealous.

I honestly don’t understand other countries that become more strict as a vehicle gets older.

They just want you to buy a new vehicle, when your good old vehicle has more and more inspection maintenances that are required of it to be done on it $$$$$. Follow the monies and you will find corruption in the corps. , govern. , and banks for loans, yes the rich people that run this system. We all have to suffer these things that own a gas, diesel, LP, or EV, even wood/char gas vehicles.
Like Yeshua said it is nearly impossible for a rich man of this world system to enter into the kingdom of God. But what is impossible for man to do, is possible for God. I am rich because I believe in what God says. The riches stored in heaven.
Bob

Talked to a master tech at work about the radiator leaking. He says I should give the AC-DELCO seal tablets a shot for the old heater core and radiator. Since I’ve already cleaned out the block and radiator and heater core, he said there shouldn’t be any risk. Apparently they put those tablets in at the factory or they used to especially with Cadillac engines with a cast iron block and aluminum heads. I figure if they sell them in the Parts department they have to be approved officially by GM to use and it’d be safer than other leak stoppers. They’re pretty strict about what a Parts Department can sell to people, only other name brands I’ve seen are Lucas and BG products.

Worst case scenario I’m still out a radiator and heater core. 4 dollars might as well give it a shot. They’re both very slow leaks, the heater core didn’t drop any water until about 20 minutes after getting up to operating temperature.

Ehhhhhh im always leary of any kind of “leak stop” I have seen way to many systems destroyed by multiple brands of it. Radiators, heaters cores, transmissions, power steering pumps I have seen them all clog or outright burst from the stuff. Worst I have ever seen is the “blue devil headgasket sealer” i have replace motors from that stuff multiple times along with complete cooling system’s. Just my 2 cents on that one

Oh yeah I never touch the Blue Devil stuff. It’s just pure sodium silicate and if you have a head gasket leak it’ll brick your engine.

Bar’s Leak liquid is dubious at best and works for a short time but you still have to flush the coolant. I think with the older engines the tablets work, the passageways aren’t too small. Ken at work doesn’t like most aftermarket specialty stuff and I trust him when he says it’s safe to use but it isn’t meant for big leaks just pinholes.

I’m gonna check the block drains before I try the tablets and make sure I don’t have any crap settled in the water jacket to complicate the issue. You can’t put this stuff in dirty coolant or you’re sure to clog something.

I had a bad tube on a radiator once and I cut it and folded it over itself and crimped it tight and put bars leak in the thing and it was fine for the rest of the years I Owned the van. YMMV.

Took the truck for a quick drive to the gas station.

This Camaro steering wheel they put in here is in my way of seeing the speedometer. Have to drive like my grandpa did leaning on the wheel. Need to tighten up the steering box, I’m not a fan of power steering I have no road feel in this truck and with the slop I’m all over the road.

The temperature sending unit sure is sensitive, it’ll read way hot and then rebound super fast to the center mark. Does that a few times while the thermostat is stabilizing. Definitely need to get a mechanical gauge in here, I might buy a new thermostat housing with access holes to do that.

This electric choke carb is practically junk, definitely needs a rebuild. I still plan to use the electric choke carb as my first victim to the woodgas but for now I’ll use the manual choke QJet dad gave me, it’s nice and clean and jetted for a 350sbc from a GMC Sprint.

My odometer works so that’s a plus. Almost had an incident at the gas station because my negative terminal was a little loose. The hood latch on these square bodies sure are convenient.

Marcus I am with you on the stop leak. but there is a stop leak made by the Conklin company that works and doesn’t seem to clog up. I am very very hesitant to use that any of that stuff but this stuff is good in my experience. the only problem with this stuff is you have to replace it if you drain the anti freeze because it will start leaking again.

It’s getting a WK, slowly working on that.

Also as far as the hose connections go they’re solid. Heater core is slowly leaking inside the cab so I took it out of circulation for now.

Looks like a good solid chevy, not too many that years up here in MIchigan that solid. All takes fair emount of time, eventualy i would like too build one with ss hopper and burn tube outer skin ss. I took a few of heater cores out too. not much frost probley in ALIBAMA by febuary anyway. I am hoping too finish my dakota some time in january, The rear frame was so thin and rusty, i had too refab a frame. all the supplys for welding and painting doubled since coved inflation EXCUSE.SWEM.

Finally had a nice dry day. Got to the block drain.

Wow. When I pulled the bolt out all I saw was black goo, I thought I’d opened an oil port. It was black from rust and there was a solid puck that had congealed together to form a nasty scab of rust. Poked that out with the screwdriver and I got a gallon of nasty nasty rusty water.

Flushed it out with my garden hose, I’m letting the radiator and block drip drain now before I replace the coolant.

Put the AC-DELCO tablets in the radiator after adding clean coolant. Connected my heater core back up. Drove for a good 20 minutes with it set to Defrost. Still have heat blowing out the vents and no more leaks! At least for now.

I probably flushed out a shot cup full of rust out of the bottom of the water jacket, it looked like black sand. My temps are more stable and stay more towards center. Still going to put my capillary mechanical gauge at the thermostat to have an accurate reading.

My TH400 is losing transmission fluid somewhere, I have a new modulator so I’m going to replace that to not worry about it. When I checked my fluid level after the drive I topped it off with a pint of Dextron 3 and I smelled a little bit of an oil burning smell out the exhaust so I’m led to believe it’s the Modulator. Probably needs a new pan gasket and speedometer cable gasket. I hope it isn’t any more involved than those areas.