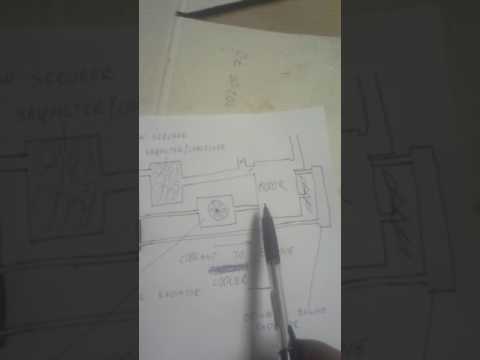 This idea has been on my mind for a long time, and a discusion in JOs thread triggered me to draw a schematic skech.

Water is great at storeing heat. And dirt. And broaken apart to tiny drops, it has great surface area.

In fact, l calculated one liter (quarter gallon) broaken to raindrop sized drops has about 2m2 ( 18 squere feet) of surface area. Smaller droplets a lot more.
Its allso a good heat conductor to use in heat exchangers/radiators.

The idea of useing engines radiator and coolant is howewer the only idea l can call my own. This is something l wuld like to hear your thods about.

As you can expect: “nothing is new under the sun…”
A different variant has been used locally…

First, a note on your proposal, the secondary part: Your system would upset the motor’s thermostat’s ability to stabilizise working temperature, if this system would be in series with the motor’s main circulation loop.
Even in parallel, control is hard to achieve.

The circulation direction in your secondary (motor bound) loop is opposite to the motor’s normal circulation route.
It feeds out warm water.

Additionally the temperature in the motors cooling system will not (usually) go low enough to cool (indirectly) the “washing water” in your system’s primary loop.

How do you handle the primary loop in the winter???

The local system was an independent (in the back of the car) self-contained system, only using electricity for a circulation pump (trailer heat) and delivering cool gas to the car motor.

No primary, direct washing part. Only a cyclone and an indirect cooling “battery”, liquid cooled with a car-type radiator and the circulation pump. System filled with 50/50 glychole/water.

After cooling and settling, reheating in the cyclone’s mantel, then to a warmed paperfilter. Then cooling again on it’s way to the motor, but that does not affect the filtering anymore!

You did not mention how to dehumidify,
nor did I… almost not at all.

Where was the radiator placed?
What was the aproximate surface area of the coil battery?

Yes, the coolant normaly doesent get cooler thain 80c, but its the second coolers purpose (at the engine output) to cool the coolant to ambient(ish) temp.

As for humidity, as you know l now use a water scrubber. I noticed gas exits this setup dry. 100% humid, but invisible. Allso l dont see any condensate in the condense catcher anymore. Before, one hopper, half a liter of condense.
Interasting, drying with water

As for freezeing, l am looking at a 1999 vw caddy, separated driveing/cargo compartment, and l dubt the system wuld freeze in there.