Just wondering if anyone has seen the youtube of the Guy with older Dodge is running his truck on Compressed woodgas?..I am still trying to find more info.

here is the link. 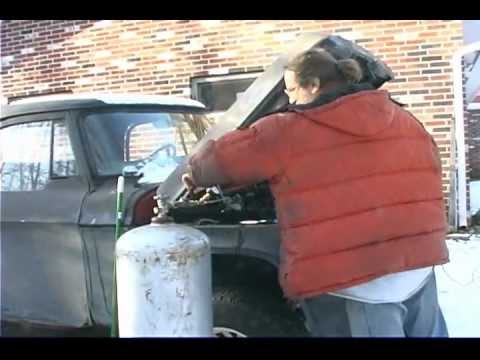 Hi DennisP
Nope this is vid and guy are new to me.
I did make it to 40 seconds on dial-up before I got booted off. Be 13 hours until after midnight before I can complete viewing.
He mentions pushing for more methane percentage.

For your more info on modern usage of compressed motor fuel gases try this:
http://www.allpar.com/model/m/CNG-van.html
Talks about and pictures first Chrysler 1991 full size vans and then 1994 minivan factory CNG fueled put in production sold vehicles. Anybody wanting to compressed wood gas experiment should be looking for the DOT approved cylinders and equipment out of these. I certified trained for these. The mini-vans had forged aluminum/glass fiber composite cylinders to save weight.
If he would have used his effort on one these minivans he could have gone maybe 30-50 miles at full rated tank pressure.
He is not stupid stating that woodgas at 105 btu per cubic foot is only 1/10 the energy density of natural gas. This work as long as it is directly using woodgas to IC engine fuel I think is on topic.

Hmm. Yes I have once compressed stored woodgas for another fellows project to 20 bars - just shy of 300 PSI.
I did not like the equipment used, or the direction for the gas usage. The Energy balance of doing this absolutely sucks so I got “busy” elsewhere.

Hope this helps you along.
Steve Unruh

As an old electrition, I would be very interested in “tank milage”…I run my gen set long enough
to thread a pipe nipple, then shut it down to get some quiet…The tank storage would give lots
of time for tars and soot to drop out…

Hi DoucieR
In the mini-van example in the article I linked to a normal 18-22 US gallon capacity of gasoline fuel on board was then with more wieght in compressed tankage, brackets and armored fuel lines rated at an 8.5 US gallon gasoline equivalent in operating time on the CHG fuel. In cubic feet of fuel gases stored refined standardized methane to an average woodgas my napkin math says it would have a 1 to 1 1/2 US gallons of gasoline equivalent with the comperssed woodgas fuel on board.
This is half the Energy Pit equation. Other half of the Pit is it will take you just as much energy input in compressing the woodgas to 3000 PSI (~210 bar) as it took to compress fill with methane. Methane fuel costs were favorable overall to gasoline only in areas able to use discounted nightime off peak electricity to do the compressing.

This is Dennis’s topic question. I will say in a well designed, fueled and operated woodgasifier you will not have any tars at this point. They will have been internally gasifier heat converted to woodfuel gases.
The 2-3 fellows I know who have played with highly compressed woodgases are using three and four stage, and sometimes five stage washing, dehumidifing (drying) and filtrations systems to not have uncontrollable soots and condensates showing up at the compression storage stage and ruining their equipment. These extra steps requiring a lot more energy gobbling motors, complexity, expense and maintenance clean out steps then just a single stage “hay” filter as in the direct woodgas to engine use Keith system.

These why for intermittent power ueasges like your pipe threader many have just gone to battery banks and inverters. Others to quicker in operation charcoal gasifier systems.
On my intermittent use woodsplitter, chainsaws and tractors it is just so much more practical, and quicker into operation, and safer to operate, to just pay the pound of flesh and buy a few gallons of Dino fuel annually. If ever that is not available you will learn to love the sound of your gen-set running on woodgas.

Well, this may be a good time to mention this. There is a fellow on youtube,claims to store wood gas in propane tanks at low pressure and us it. His video shows how he does it. I know, I know, wood gas CAN NOT be compressed. At least, thats what we’ve been told. Look him up on youtube. Just type in Langston alternative energy and it’ll pop up. Love to see some of our ‘masters’ take this on. Just saying’

So, is anyone going to watch mr. langston and tell me whether he is full of it or not… If what he is doing is indeed do-able, then there would seem to be some other uses for wood gas in addition to running motors.
Steve, i know what you are saying. I grew up in the woods (still live in them). But, i’ll bet that if my granny could have lit a single burner of wood gas, she wouldn’t have fired up the whole stove and heated up her kitchen just to make hot tea.Some of that ‘they did it this way’ was because there was no other way to do it.

sorry, i don’t have a clue how to post the link to his youtube video. however, if you go to youtube and type in compressing wood gas, it pops up…

langston alternative energy gets a lot of other videos as well.

I’m certainly no expert but I see no reason as to why you couldn’t compress woodgas. Pretty much any gas is compressible, the trick is not having it explode in the process. This was discussed in another forum though I cannot recall which (things get lost here frequently). There are multiple YouTube videos of folks compressing woodgas, one fella even claims to get a mile or so down the road on a tank worth (not very practical). The chinese used to use giant balloons to collect digester gas. The pressure would fill them and then the balloons would squeeze out the gas as it was needed for cookstoves (it was their primary function). They would however place the balloon quite a ways off in the distance in an open basement with a thatched roof overhead so that the village wasn’t destroyed if (nay when) it exploded!

I would suppose one could do a similar thing with woodgas however it seems far more practical to generate it as it is needed rather than try to store it. While it would be convenient to have a tank of it ready to fire up the BBQ, stove, etc I think the inefficiency, danger and equipment involved would quickly deem it impractical but I could be wrong.

If someone really wants to try it (entirely at their own risk and THEIR liability) if there is NO oxygen in the woodgas (perfectly sealed system) there is no theoretical reason as to why it couldn’t be plumbed into a compressor head, compressed and stored in a tank. I would use an old (on her last leg) compressor, (the woodgas won’t be kind to it). I wouldn’t run it for more than a few minutes at a time (the compressor head WILL get hot) and I certainly wouldn’t attempt very high pressures. A 60 Gallon compressor tank would make a BIG boom if it went off, (think torpedo and/or shrapnel here) start with a very small tank (5 or 10 gals). Use a bubbler between the filter and compressor, and another between the regulator and the stove or device being fueled. Do it WAY out back away from anything, in a pit would be advisable, weld some heavy chain to the tank and anchor them WELL.

You get the idea… For the record, I personally will NOT be compressing woodgas.

Pulling from my memories of now gone sites the reasons for not doing it are in no particular order:
The majority of the gas will be inert nitrogen compressed for no reason.
You risk a great big kaboom involving shrapnel if there is any oxygen present.
The energy required to compress will be greater then that stored.
CO stored at a certain pressure is unstable and will revert to CO2 and carbon black.
So not impossible but not of much use…

Moved compressed woodgas comments to this thread. Carry on…

Safe and efficient way to compress wood gas is the way mother nature does it for us. Just need a gasifier to let it out of the wood when you need it.

There is that Mr Teslonian guy on youtube making liquid fuel from wood, much easier to store it that way.

I don’t really believe all Mr. Teslonian’s claims… I’ve asked him questions on his videos and for some reason none of my questions ge approved.