Just playing around with the idea of a vertical screw auger / crusher, used to deliver feedstock on a long shallow ride through pyrolysis. This is still rough, but the idea is solid. More coming soon…

I think I’ll share all my ideas from now on… Maybe get out of that proprietary mindset. 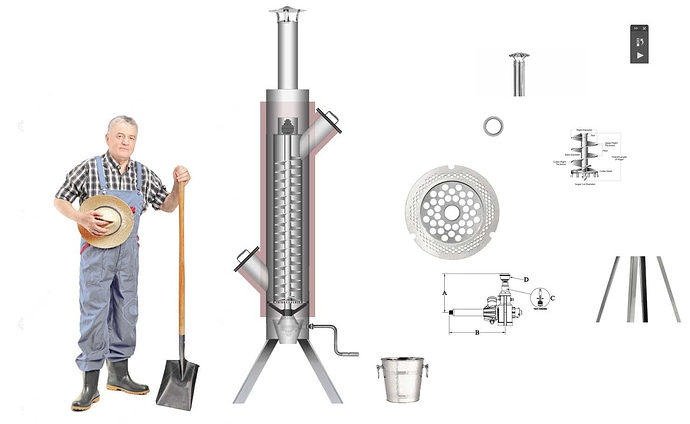 The basic idea is that this contraption could serve as a continuously fed charcoal retort. It could be used manually, but also automatically with a small electric motor…

Here are the basics:

We use 100:1 worm gear reducers with a DC Motor running at 48 volts off of a step up module. The motors run at 1700 rpms so the auger turns at 17 rpms and will twist into knot if it gets jammed good enough.

Not to sidetrack you but have you thought of just modifying the Imbert with an automated grate shaker?

I think if you detuned the jetting and then opened up the restriction and grate, you could generate char very rapidly. But it would be dependant on a specific fuel, chips vs pellets.

Another idea is to eliminate the grate and use an auger like you have to but it would be horizontal feed out.

I think the yield differences in a dedicated charcoal retort vs an imbert gasifier would be fairly significant. This is why All Power Labs had a different version of their GEK that was used for biochar production—BEK. That being said, an imbert might be a good choice if viewed from a financial aspect… i.e. it might be good enough, especially if you already own an imbert gasifier.

A charcoal retort with a dedicated heat exchanger is a very interesting proposition. This was why I believe in charcoal gasification so much. The basic premise being that we simply split gasification into two groups… drying / pyrolysis happens in the retort, and oxidation / reduction happen in the gasifier… This versatility lends itself well to market opportunities.

In fact, the only way we can compete on a philosophical level when comparing biomass to charcoal gasification, is if we are capturing the left over BTUs during pyrolysis… Any time there is a chimney or radiator involved in the equation, there is wasted heat that is blowing off to atmosphere… So, with my example above, the chimney is there due to my laziness in drawing a heat exchanger

I personally hated tar so much that it drove me towards the dark side… I was thrilled to never, ever have to deal with it again… And, in my experience, the performance with gasification was more consistent with charcoal vs biomass (especially on start up).

So, if the dedicated retort can be specialized for heat capture, AND is superior in char production, to me, I feel like I’m on the right path.

With all this being said, there is the “hassle” factor with char… And for many, this is a turn off. i get it… It’s all good.

Hi Troy , great idea and one I have been meaning to try out on a grain auger for ages now , but was always put off a bit because I have had a lot of extruders ranging from 50mm up to 250 mm diameter over the years , used for recycling plastic ,so if I can say that if you can design a screw that will not compress the wood chips in the barrel but convey them along then you will be onto a winner , I have seized up a extruder with a 600 hp dc motor trying to push along a handful of carbon black ( masterbatch pigment ) no way could I get that motor to push it out the end , but could easily turn it by hand backwards ,
Dave

I can’t do links right now but check out alex English system for Burts greenhouses. It uses chips into a furnace through a horizontal belt and out the other side.

Another great EDEE your part, Troy

According to you what size of wood chip passes through this equipment?

Maybe a slight vertical vibration of the screw will help?

I’d say anything under 1 inch would work well… The thicker the feedstock, the longer residence time needed for pyrolysis. I like to run charcoal at 1/8" (the size of rice krispies) all the way to 1/2". So for us charcoal guys—and biochar people—smaller feedstock is ideal. 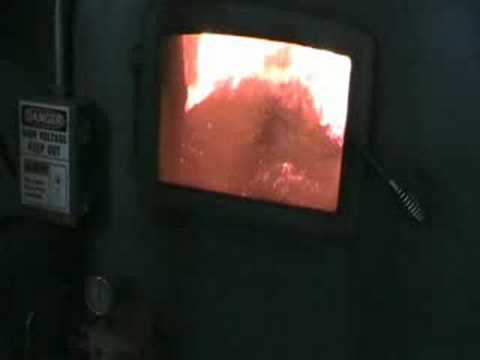 and his powered large tlud 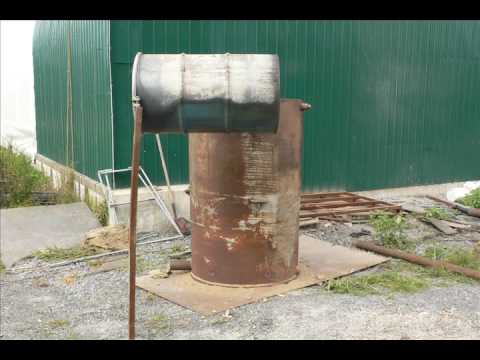 both really cool I think…

Your concept of horned continuously fascinates me.

I wonder about the need for screw-without-end!

I fear that the screw consumes a lot of energy unnecessarily!

Moreover this screw complicates the construction of the horned.

Nice design, did anyone actually build and test one yet?

I would like to build something like this. Small scale and continuous for carbonization of dry toilet waste mixed with fine wood chips.

I’m used to seeing a burner under the feeding auger chamber that is fueled by the pyrolysis gases coming from the main reactor vessel.

On this setup I see what might be a fan on top of the right hand stack. Is that fan pulling in air that passes through the cooler into the top of the main vessel where it combusts the gas?

Hi Troy
Did you ever manage to build your continuous feed charcoal retort ?
I’ve been looking at building a horizontal system using two augers , one on top of the other , one for drying and the second is the pyrolysis tube.
I will have to do a hand drawing and post a photo of it.
Thanks
Patrick

Patrick, it is so good to hear from you.
Bob

Very good to hear from you

Patrick, good to hear from you. Still in Australia?

Coke batteries:
As far as I know this is the most efficient way to make a high quality carbon product. 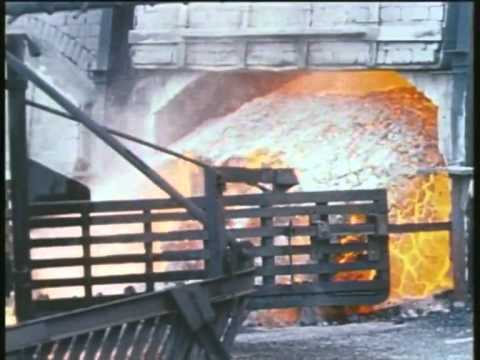 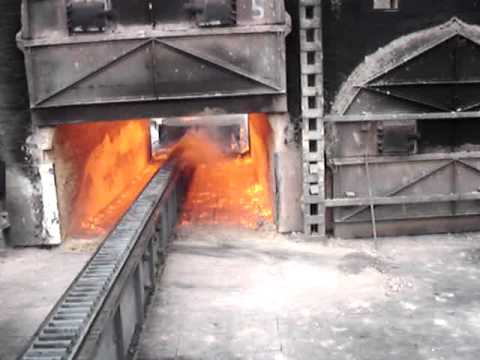