l was on a rehab for the last few monts trying to fix my woodgas adiction problems but the mind is weak. Every time l look at a dynofuel drinking engine a gasifier starts building in my mind. So l think l will just give up und find my self a project…

But enough of that. The real reason l started the topic is that l have two potential cacrifices for the woodgas. One is a Deutz torpedo tractor that wuld be so nice on wood ( we split firewood with it on a hydraulic log spliter- it sometimes runs for up to 14 hours stright on constant 1600 rpm), the other is a VW Golf 2 about 30 years old so an oldtimer. It wuld be such a great parade car, and alsow great for roadtrips.
The engine power is on hand, now the problem. Both are diesels. A big ouch.
So what do you guys think of it? Is ith worth the effort? Did anyone convert adiesel before?

We did manage to run a single cylinder diesel engine on charcoal a few years back and almost too easily in fact we had the pump turned way down and so must have only just been getting a drip of fuel , but the engine ran right up to speed with no problem at all once char gas was let into the air intake …

Here is an old VW with about 300,000 miles on it. The compression is down enough that it seem to really like woodgas . ( sold the truck last year ) 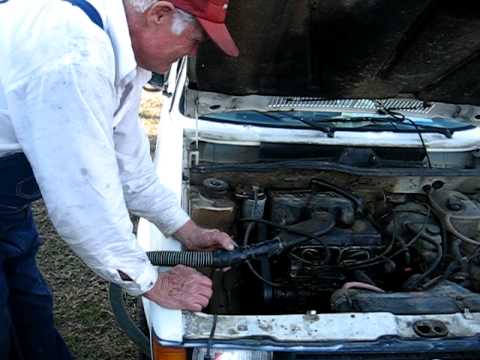 Hey Kristijan most folks over focus on the diesel engines compression ratio and do not realize the exterme diffnerces between one type of diesel fuel injection system to another.
Some will be easy - other systems nearly impossible to deisel flow reduce without injector tips overheating damage.
Load up and read the “Swedish papers” on this can be found in the resources section of the DOW.
Also talked about in detail in The Finn VesaM’s Woodgas for Motor vehicles book.

Hi Kristijan
This pdf can be interesting for your approach.
you may need to translate it, it is in french

Hello Kristijan. I think you would do a great service to moving woodgas forward if you did a woodgas diesel. As you saw and heard, it is not truly a new idea, but as Steve U says there are problems to sort out such as cooling the injectors ( thank Steve, I never knew that could be a problem) If you do your work and share on here, we could all learn and possibly others would be interested in joining the pursuit. Similar to the addition of charcoal woodgas. The benefit of posting on DOW is you have a lot of knowledgeable people that would be very willing to help ( I note the discussion by Mr. Wayne about the cable real on his log skidder. He had a problem and asked for help and it was probably a question that was as far away from woodgas, and yet several of the guys had had experience and joined in to advise him. The talents on here are endless if you look or ask ) TomC

Great info thanks you all!

So in general the compresion ratio needs to be reduced. Can someone explayn why?Woodgas has a high “octane” numer doesent it? Is auto egnition a problem here or somehing else?

Woodgas can handle up to 17:1 in the laboratory. In the real world maybe less. Most indirect injection diesels operate around 23:1 or more.

Woodgas starts to get critical at 15 – 17 : 1, dependent on the combustion cavity geometry and turbulencies. Small diesels often have compression ratios at 21:1 and more…

Well that might be a problem then… It still has good compression despite its age. Will perform a test sometine soon (similar to whar Wayne did on the video) end go from there.

Wich part of the woodgas is more critical? the hydrogen or CO?

Hi, Kristijan!
3.7.2016
Much depends on the CO2 content in the gasmix. It restrains selfignition.

If you “have to” operate a motor you cannot decrease the compression ratio on, and can accept a reduced power output, you can feed it by strangling the intake to a controlled vacuum level.
Then the compression pressure can be held below the critical level.

This will of course lower the efficiency figure. Less interesting on a vehicle?

That is a great idea Max but wuld it have enough presure to ignite the diesel?

The situation isnt all flowerfull but l love big challenges

just have to get promition from my father in law to start working on the engine.

Hi, Kristijan!
3.7.2016
You start in the normal way on diesel, without intake rsestricton, and then proceed…
Clarifying: The reduced intake pressure level has to be pressure-controlled; that means that it regulates the intake pressure independent of intake volume!

That part l understand but when the car is runing on load with woodgas + a squirt of diesel will the pressure of a starved engine be big enough to egnite that diesel? No diesel fire no woodgas fire…

edit: one realy just has to mount a buterfly for the air/gas mix and set its max openingto a point where the car starts geting dangerous amounts of air (pressure). This wuld then be the throtle. what do you think?

Did anyone convert a diesel before?

Kristijan, in the 1980’s there were some programs to use gasifiers with small diesel water pumps in India. They ran the engines in the hybrid or dual fuel mode, and the diesel fuel replacement started at 40% during start-up and up to about 80% while running. Here is a screenshot of part of page 39. 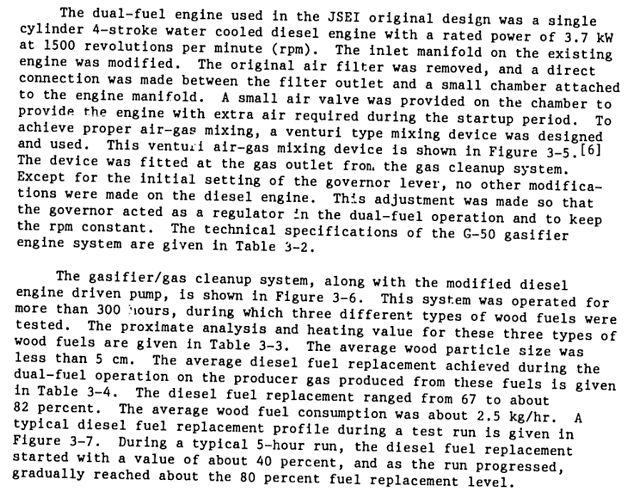 Hi, Kristijan!
3.7.2016
The intake pressure has only to be reduced a fraction of an atmosphere.
One can experimentally set it to avoid the knocking level.

In that case just the gasifier resistance might be enough… lt is an old engine afterall… about 500000 km.

You should not start looking for shortcuts by including external equipment!

This suction pressure control will anyway level the intake vacuum by a set minimum; what comes additional from external equipment will be taken “into account” as long as it is smaller than the set minimum vacuum.

That shuld give a more controlled engine run. True.

I looked thrugh some forums and found out the folowing;
-engine is rated 23.5:1
-the engine of this age and condition has about 20:1