I know spring is a ways off, but I’d like to show you my fall plantings of winter rye (mostly) and winter wheat for green manure. I’ll mulch mow it at 6" and till in under for green manure about a week or so before I plant. These pics were taken Dec 23, 2015. That’s asparagus on the right in the first pic. Man, that’s Manna in the spring and I don’t have to wander the roadsides for it like I used to. It took 4 yrs to get established well. 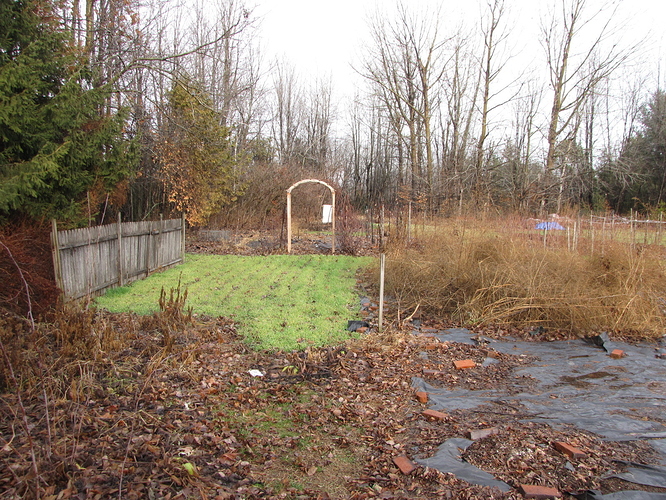 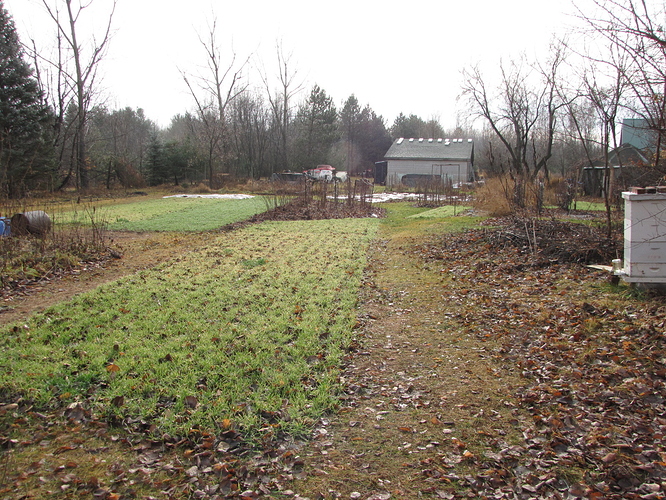 Finally finished roofing the back roof on the shop. 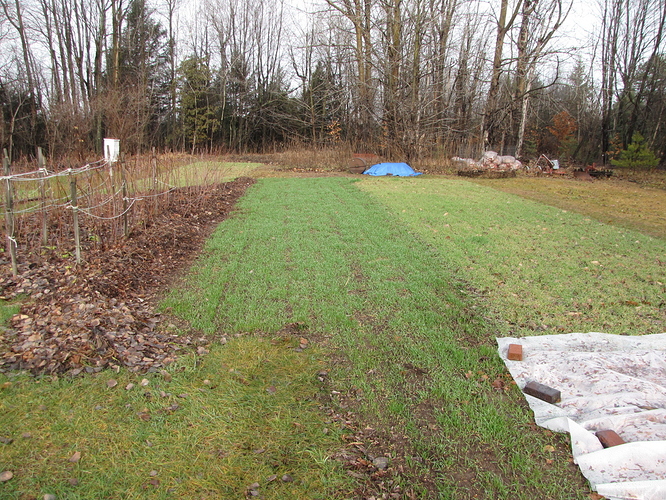 Winter wheat, the dark green, was planted a little late, but the mild weather let it put down some good growth.
Oh, yes, we wrapped the beehive today.
Happy New Year, All.
Pepe

Nice. This was the first fall I used winter wheat in the garden. I to was late but it came up. All under snow now. Thanks for the pictures and nice shop…

Pepe, nice garden. I just had to show you my green cover crop in my garden here in South Central Texas. I just took these photos a few minutes ago (Jan. 4, 2016). 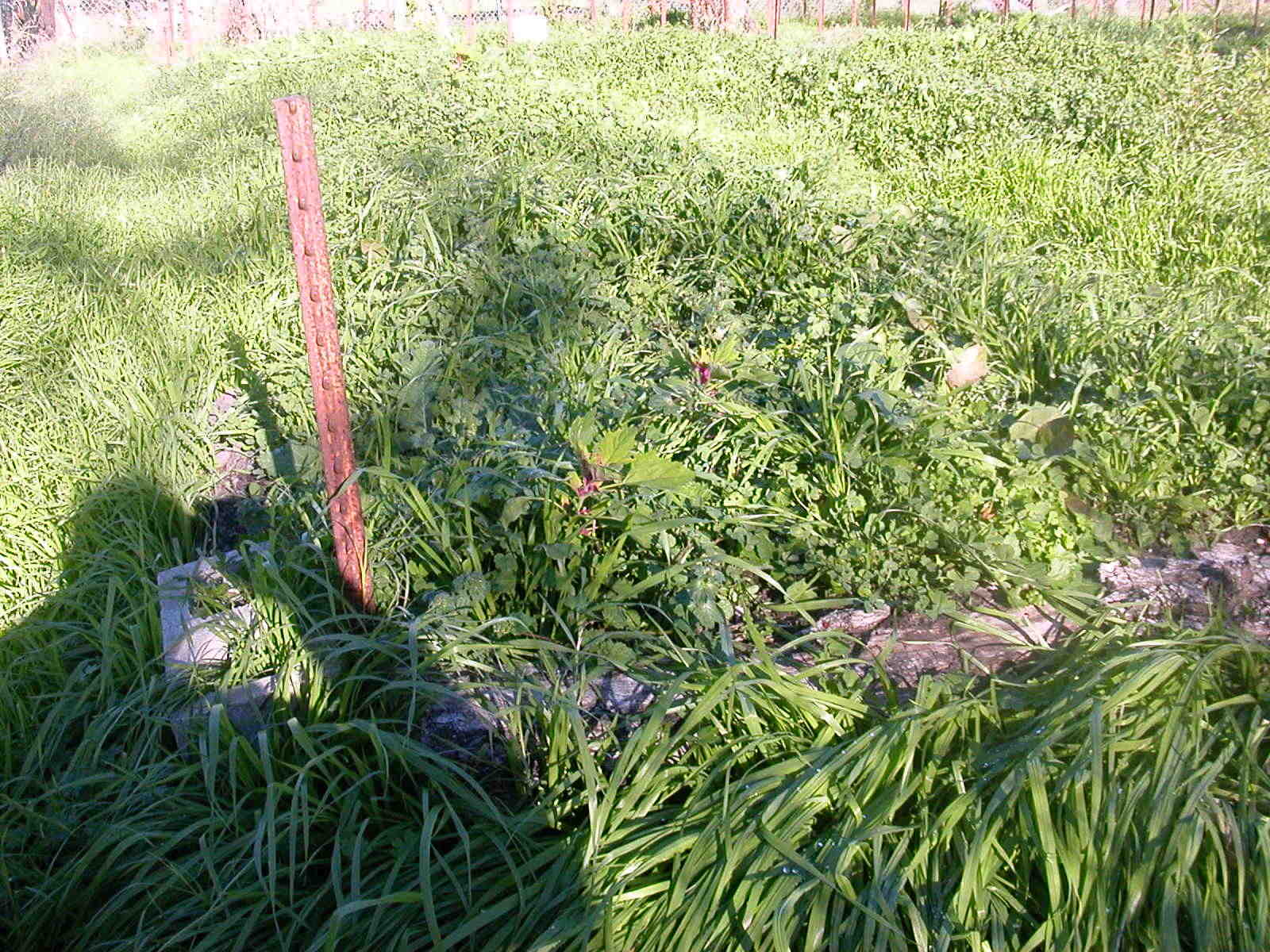 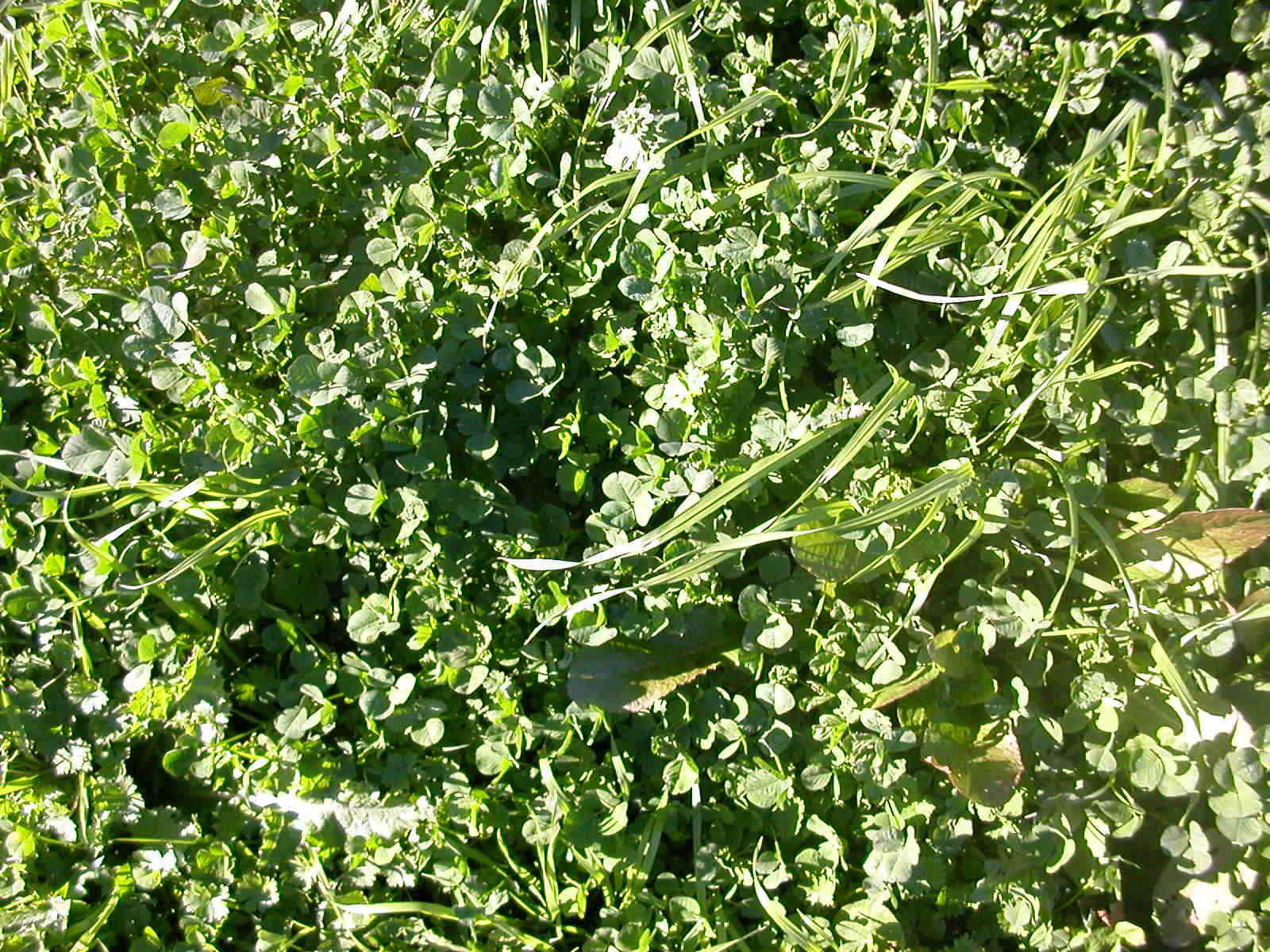 Clover_jan4_2016.JPG1600×1200 235 KB
This garden is only fertilized with home-made compost and bio-char from my charcoal making process. The wheelbarrow shows the fines that are sifted/brushed through 1/8" hardware cloth into the wheelbarrow. I layer these fines into the compost pile with cow-manure that I collect in the pastures. I turn the pile using a front-end loader on my tractor. The addition of the bio-char seems to change the pH so this clover sprouts everywhere. (At the very end of the row you can see some Lambsquarters volunteers. I got some seed from Martin P. and eat the leaves with spinach.) In a few weeks, I will be planting Red La Soda mutant potatoes. http://potatoassociation.org/industry/varieties/red-rounds-potato-varieties/red-la-soda-solanum-tuberosum 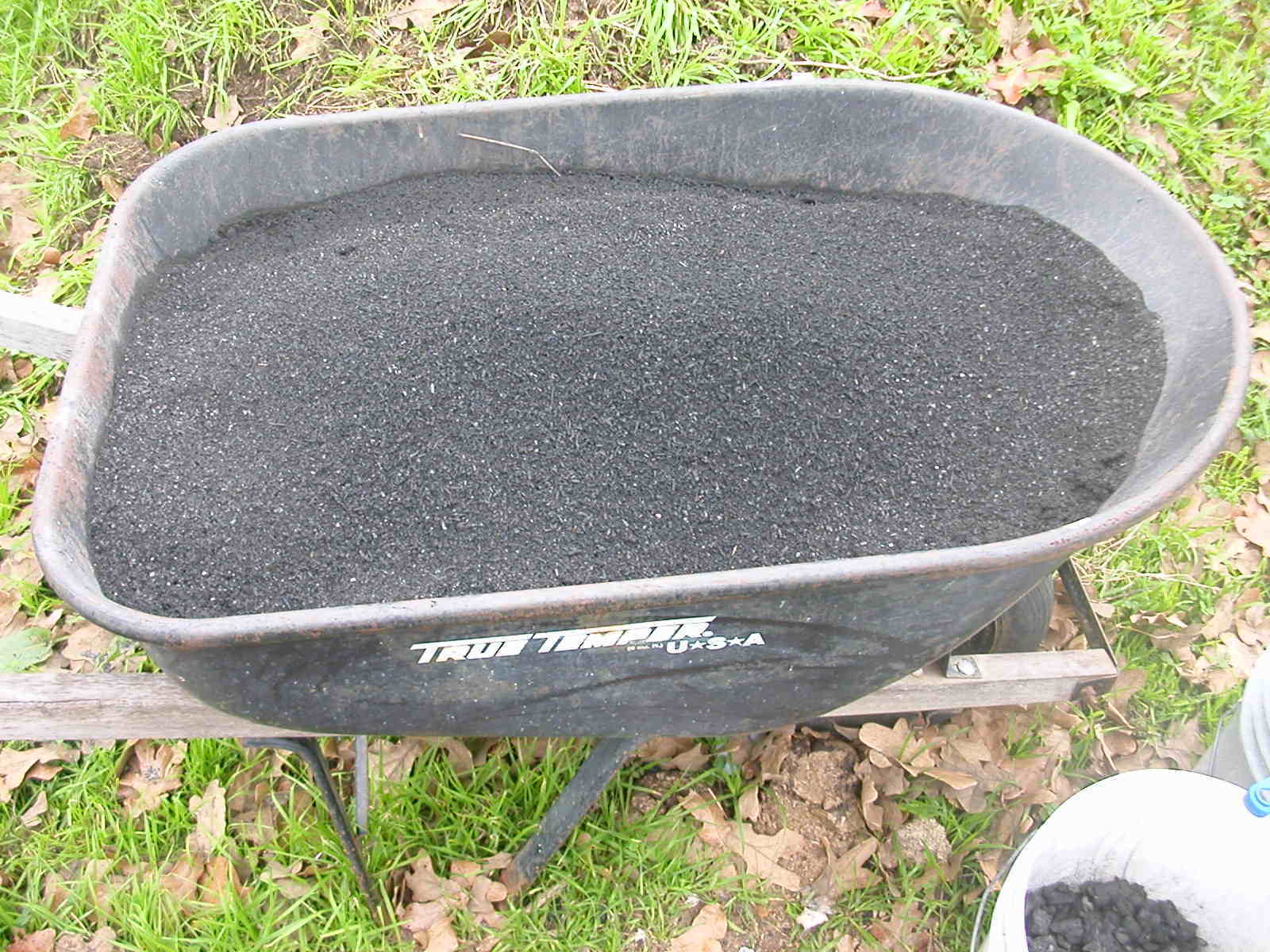 Hi Ray,
Nice, just look at that growth, beautiful. The clover is a legume and fixes nitrogen on its roots, a great choice for green manure. Harvesting taters in June, ha I might have a few small ones by then. Your char looks great and ready to do its job in the soil, I love it. I have lived all my life with deep winters except 2. One I spent in Santa Monica, Ca, 3 blocks from the pier and beach, the other I spent surveying in Dong Ha Province in the northern I corp bordering the DMZ. Guess which one I enjoyed more, lol.
I have sandy loam and need organic matter to keep the soil friable and fertile. I also spread char whenever I have some. I have more lambsquarter volunteers than I can eat. I love it by its self (most of the stems, too) just steamed tender and served with a dollop of butter lightly salted and peppered. Yum! Better than spinach, which I also like, but the hot weather turns it bitter. Another great wild green is redroot. Yes it’s root is red, but we eat just the greens and stems, delicious. I also grow red potatoes, Red Norland. My whites are Kennebecs (Maine potatoes) and Green Mountain (which I cross the pond “Lake Champlain” and buy in Vermont, where else). Of course latitude and temps make a difference as some of our taters won’t do well in the South and vice versa.
I have been gardening 100% organically for the 43 years I have lived on this 8 acre homestead. Here’s a few more pics of my cherished discipline, organic gardening. Geez, once I get started on gardening, there’s no end!
Thanks for your comments and sharing your pics.
Pepe 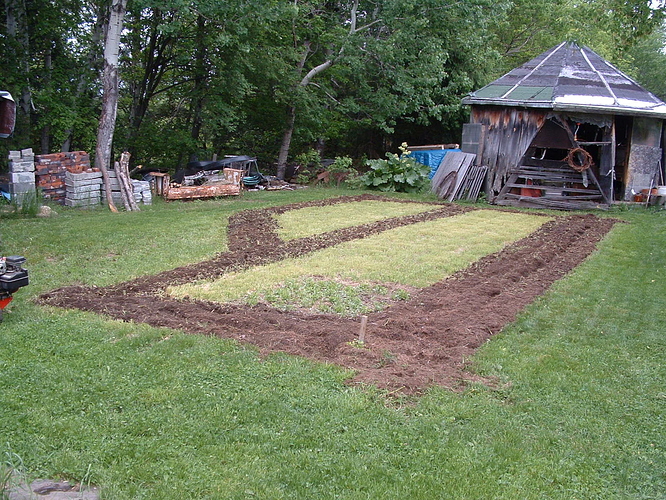 Winter rye. Check out the rhubarb plant flowering in the background. Strawberry rhubarb pie to die for! 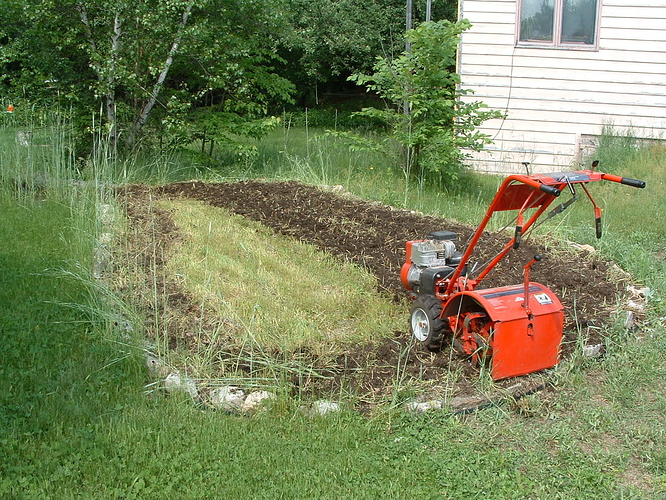 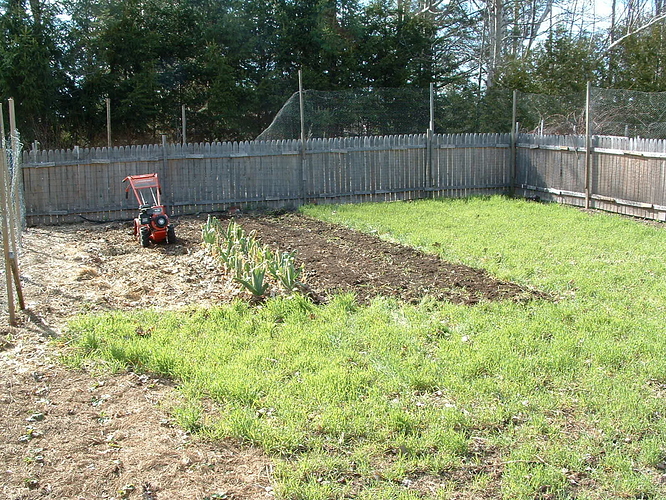 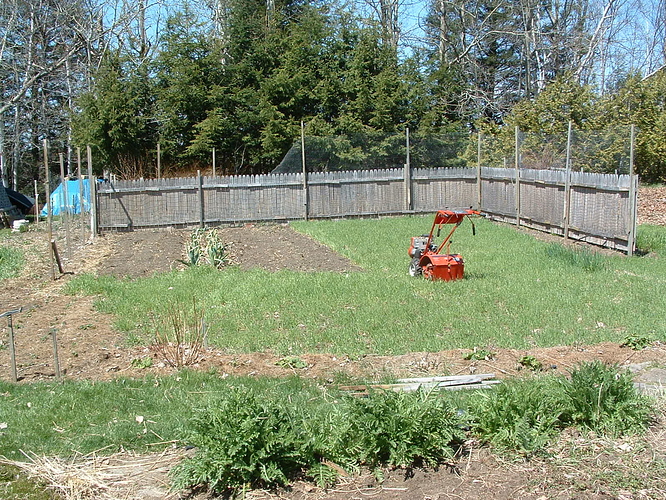 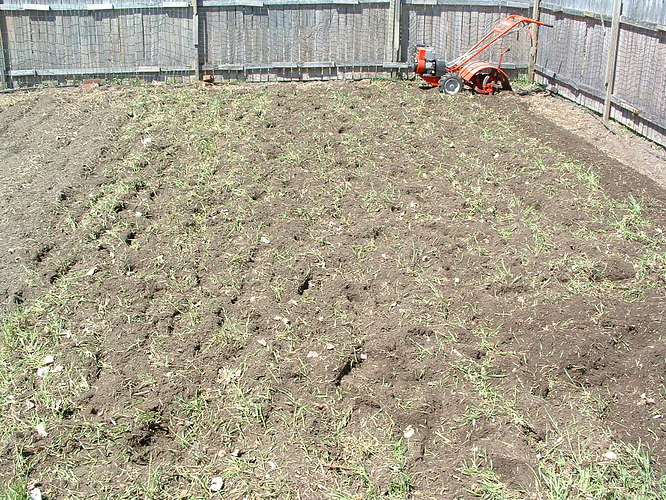 Since this time I have been mowing the grass before tilling. It’s easier to incorporate the shorter grass. 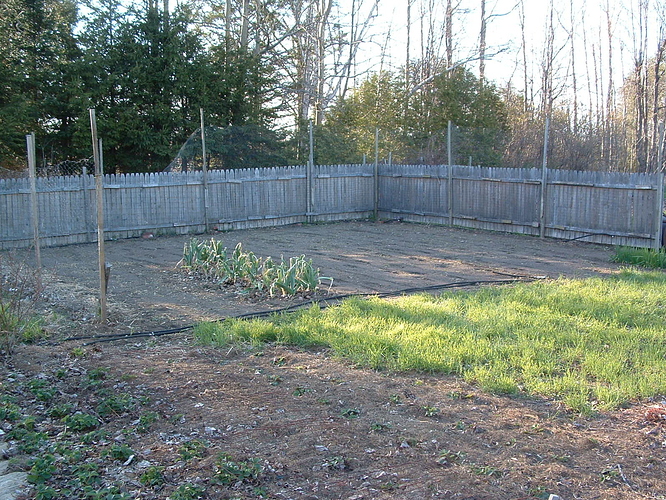 I don’t see a char/ gasifier on the rototiller.TomC

Hi Tom,
Yes, those pics were taken before my gasifier trip. I do, however, have a short clip of that gasifier running on woodgas fed to it with flexible drain pipe. 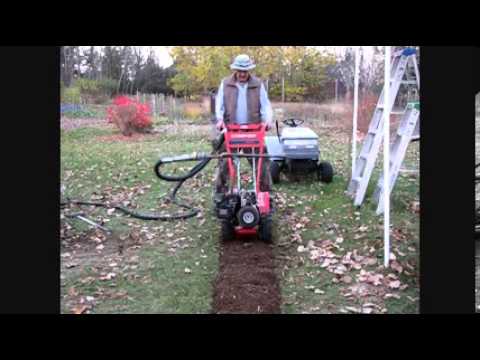 The Craftsman 18 hp mower in the background will be my gasified tractor, soon I hope.
Pepe

I just found this file again and thought you might like to see the flare colors for this run. Best color starts at 12 sec. This shot also shows the untilled grass section where I will do my test. It took several passes just to tear up the sod. 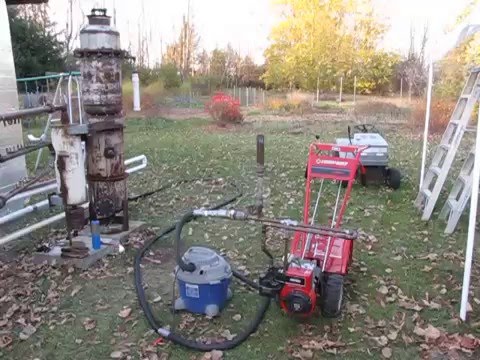 Hey Pepe; I was just kind of kidding you. I should have know when it comes to woodgas if someone mentions something you can do it. Good video.

The black hose attached looks like how the big farmers are injecting manure into the fields. They have a portable pumping station along the road where semis can hook up. Then they have about 3/4 to a mile of about 8 inch rubber hose that runs out into the field and is connected to a tractor with injectors attached. I would like to know the pressure that the pumping station puts out to move the manure through that long hoseTomC

Hi Tom,
Thanks for commenting. I knew you were kidding, I just needed an excuse to post another vid, lol. If one looks closely at the flare flame at 41 sec, you can pick up some of the colors (redish and bluish purple) although it’s a little hard to see.
Some of the farmers here have manure ponds. They load up a trailer tank and pull them through the fields spraying the manure on the fields. I’m only a half mile from some fields and it smells to high heaven out to the highway a mile away. Of course I’m east of most of the fields which puts me in the path of the prevailing winds. Got milk?
Pepe