Here is the latest: 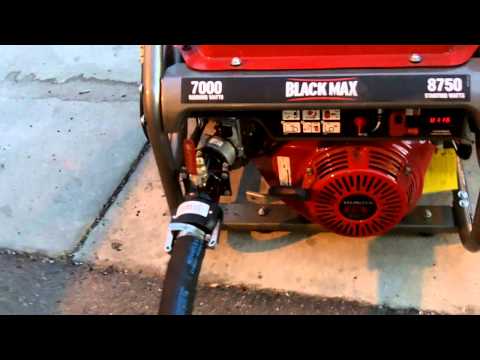 Hey troy, sure looks pretty. You’ve been busy. Have you tried pushing the wattage any higher?

Very nice Troy.
I was wondering where you went and now I know. Do you mind sharing what you did for the nozzle? Also, the mods on the Honda, were you able the adjust the timing at all? Are you running through the carb or is it removed? I’m curious if you added more load just to test it’s ability?

Yeah… It ran at 3.2 kW for half an hour… It was a bit of a struggle, but we think the carb valve is too small. We’ll be bumping up the carb valve to double the size (with cold air intake filter too), and I think we can get a little more juice (maybe 4.0-4.2kW). But that’s with this engine… With a 14kW generator, we’re pretty sure it’ll do 7-8kW.

It’s the same TIG cup nozzle system we’ve been using… no changes there. We haven’t adjusted the timing on the Honda yet, but with the H2 we think we’re producing, we might get more efficiency by retarding the timing a bit.

We are directly connected to the air intake on that Honda… Flanged. We’ll add the carb back on in a modified state next week. Yes, we went up to 3.2kW with an undersized ball-valve carb… it was a bit of a struggle.

With the right valve, some timing adjustments, I think we could do 4.0-4.2kW, sustained load… Give or take…

very nice! glad to see your latest work, so thanks for sharing.

what size of air inlet valve are you currently useing? i’ve always used 2 hp per Kw, and don’t expect more than that… looks to me like you’re in the ball park. Keep up the good work.

I’d be happy at 4kW sustained load on a 7kW engine. Although H2 doesn’t really give us more power, so to speak, we get enough of it (I’m speculating) that we can start to retard the spark timing significantly on engines because of the flame ignition speed.

Lots of testing and tweaking still to come… Thanks!

yup, I would have suggested a 3/4" air inlet… looks like you have a plan. Keep it up.

Troy, how do you hold the TIG cup on to the 1 inch pipe?

What Don said - but also, there are different types of size 8 cups, for different TIG torches. Specifically, what part number are you using to fit the 1" pipe? Also, local welding shop says that threads-per-inch (TPI) for TIG torches ranges from 16 up to 32, depending on the diameter.

What am I doing wrong? Aughh, don’t say that Alex. Mine are on the way somewhere.

57xxxx series cups appear to be the correct diameter to fit a 3/4" pipe, but, as stated, the cup is designed for machine threads, rather than pipe threads.

I suppose you could cut a piece of unthreaded pipe and tap machine threads onto it.

Big apologies guys… I just spoke with Jared (fabricator), and you are correct… They are machine threads. We had the pipe threads machined at a machine shop.

Since I moved down to Mexico, and am not in the shop any longer, I am not on top of the fabrication details as I once was. I should have remembered this though, and with our first prototype, I bought an NPT to machine thread adaptor because of this very problem.

Again, apologies to anyone who spent money on what I said earlier… Sorry Don and Alex.

Apologies accepted Troy. We don’t let little things like this stop us!

No apologies needed, Troy. We appreciate and admire your work on this. I’ve been looking for an excuse to buy a tap and die set …

I brought the cup I had in to Fastenal. They found the threads on mine to be metric machined threads.